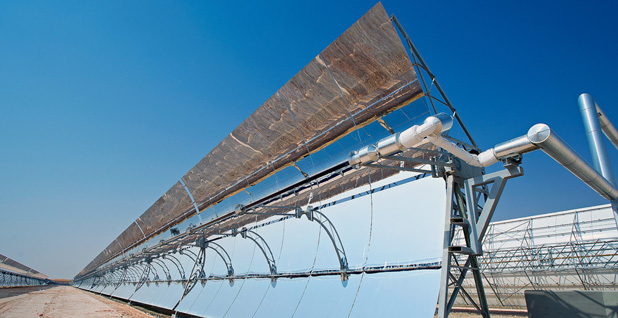 In a patch of otherwise empty desert 30 miles south of Dubai, the outline of what is expected to become the Middle East’s largest photovoltaic solar project is taking form in the sands of the United Arab Emirates.

The Mohammed bin Rashid Al Maktoum Solar Park, launched in 2013 with 13 megawatts of capacity, is expected over the next 15 years to expand to 3,000 MW, providing the Dubai Electricity and Water Authority (DEWA) enough power to meet 15 percent of UAE’s demand.

Nearly 4,000 miles away, on a desert plateau in Morocco, one of the world’s largest concentrated solar power (CSP) complexes is being built in Ouarzazate province, a landscape made famous as a backdrop for Oscar-winning films "Lawrence of Arabia" and "Gladiator," as well as HBO’s hit series "Game of Thrones."

The Ouarzazate solar complex, to be developed in three phases, will account for roughly a quarter of the new electricity generation called for under Morocco’s 2,000 MW solar development program launched in 2009. It is also the kingdom’s answer to expensive fossil fuel imports and climate change.

These two massive energy projects, along with other solar developments in Egypt, Jordan, Saudi Arabia and elsewhere, are demonstrating that the oil-rich region known in policy circles as MENA — Middle East and North Africa — is beginning to challenge long-standing assumptions about its energy resources.

While petroleum will remain the primary economic engine for MENA for decades to come, experts say renewable energy is gaining substantial new interest and investment from both government leaders and private-sector energy firms across the region and beyond.

Together, these regions claim a population of 321 million people, on par with the United States, and they cover a land area comparable to Europe. MENA also claims the world’s wealthiest nation, Qatar, as well as some of its most economically and politically challenged states, including Syria, Libya and Palestine.

In terms of renewable energy development, MENA has lagged behind much of the rest of the world, a condition experts attribute to the region’s historical reliance on oil and gas, but also its uneven economic growth and destabilization created by wars, regional crises, and long-standing religious and political tensions.

But that is beginning to change, especially in the more developed energy states of the Persian Gulf, as well as Egypt, Jordan and Morocco.

Global consulting firm Ernst & Young, in its latest Cleantech Survey Report for MENA, ranked Saudi Arabia, UAE, Morocco and Jordan as having the greatest potential for renewable energy investment in the region, adding that "the opportunities to provide affordable and secure low-carbon energy are continuously expanding."

And in a recent blog post, General Electric executive Hani Majzoub, head of the GE power conversion sales for renewables across the MENA region, called 2014 "a breakthrough year for solar in the Middle East," with 30 projects receiving contracts, including 12 new solar sites in Jordan alone.

"Accelerating the growth of solar is the continued development of innovative technologies and services that are further driving down the cost of solar systems, offering the rapidly growing regions of the Middle East and North Africa a valuable and economically viable energy alternative to conventional fossil fuels," Majzoub said.

UAE, an exemplar of Middle East modernity with its gleaming twin cities, Dubai and Abu Dhabi, is also becoming the region’s clean energy hub. It has committed billions of dollars in new clean energy projects over the last four years, while also establishing a framework for outside parties to bring new ideas, technologies and investment into the region.

"The UAE, among all the oil-producing countries, has become the first mover," Adnan Amin, director general of the International Renewable Energy Association, based in Abu Dhabi, said in a recent interview with The National, an English-language newspaper based in UAE.

Al Tayer’s comment coincided with DEWA’s solicitation of bids for the largest build-out to date of the Al Maktoum Solar Park in Seih Al Dahal, at 800 MW. A 200 MW expansion, led by a Saudi contractor and using solar panels made by U.S.-based First Solar Inc., is already underway and set to be completed in 2017. The 800 MW phase III expansion is scheduled to produce first power in 2020, according to officials, pushing the park’s total generation to more than 1,000 MW.

UAE’s big buy into solar is partly driven by politics and partly by economics.

Leaders — including Sheikh Khalifa bin Zayed, the president and ruler — have championed solar power as an alternative to fossil fuels and a pathway toward reducing the country’s carbon footprint. But solar has also proved to be very competitive in terms of price. The 200 MW phase II of the Al Maktoum solar park, for example, will be built for a record-low cost of $0.0584 by ACWA Power of Riyadh, Saudi Arabia.

Earlier this year, ACWA Power officials announced the company had secured $344 million in debt financing for the phase II expansion under loans from three Middle East banks, including Abu Dhabi-based First Gulf Bank. The loan is expected to cover 86 percent of the project’s cost, according to officials, and will offset roughly 470,000 tons of carbon dioxide equivalent annually.

Oil is removed from the electricity fuel mix

That doesn’t mean UAE is abandoning fossil fuels in favor of green energy. Under the Dubai Integrated Energy Strategy, officials have said DEWA will seek an electric power portfolio consisting of 71 percent natural-gas-fired turbines. Solar will rank as the second-largest electricity source, at 15 percent, followed by 7 percent each from coal and nuclear power.

But in UAE and across the region, one key energy fuel that is being removed, at least in large volumes, from the electricity mix is oil.

Stephen J. Auton-Smith, director at Ernst & Young and an adviser to several major energy projects in the MENA region, said in an interview that oil-rich states like Saudi Arabia face huge opportunity costs by burning oil for power generation. By harnessing the sun’s energy at utility scale, those countries can redirect oil and gas traditionally used for domestic energy consumption to other higher-value uses.

"When you have vast amounts of open land and an incredible solar resource like these countries do, the underlying structural driver is to conserve oil and gas for export and produce power from other alternative sources, even in the context of recent declines in commodity prices," he said.

There is also the long-standing challenge of providing clean water to residents and businesses, a problem many water-stressed countries are addressing by building desalination and advanced wastewater recycling plants.

By scaling up solar, utilities in water-stressed countries run energy-intensive desalination and treatment facilities using solar energy rather than oil, resulting in lower opportunity costs and lower greenhouse gas emissions. A number of solar PV and CSP hybrid pilot projects are underway for this purpose, including in UAE, Saudi Arabia and Kuwait, Auton-Smith said.

He also noted that electricity demand is rising in many MENA countries due to sustained population and economic growth. For countries lacking substantial fossil fuel resources, achieving greater energy independence means tapping a broader energy mix than MENA countries have traditionally relied on, he said.

Such conditions are playing out in Morocco, the MENA country farthest from the oil fields of the Middle East and most dependent on energy imports.

According to the World Bank, Morocco imports more than 91 percent of its energy resources from other countries, cutting a sizable hole in its national budget. Other experts estimate the country’s spending on crude oil, refined petroleum and coal at roughly $3 billion annually.

Recent lower oil prices have helped Morocco cut those costs and shrink its budget deficit from nearly 5 percent of gross domestic product in 2014 to 4.3 percent this year. But that hasn’t dissuaded the kingdom from shifting its long-term energy strategy away from fossil fuel imports in favor of domestically produced renewable energy.

As part of its 2009 National Energy Strategy, Morocco has pledged to bring online 6,000 MW of renewable energy — 42 percent of its installed capacity — from hydro, wind and solar resources by the end of the decade.

Last year, officials told the Al-Hayat newspaper that the country would invest $11 billion in wind and solar over the next five years, allowing the country "to turn from an importer into an exporter of alternative energy by 2020."

In addition to the Ouarzazate project, Morocco has identified four other sites for utility-scale solar developments: Ain Beni Mathar, Foum El Oued, Boujdour and Sebkhat Tah. Once built, the sites’ cumulative output should help Morocco avoid roughly 1 million tons of oil equivalent in imports annually and reduce emissions by 3.7 million metric tons of CO2 equivalent, according to the Moroccan Agency for Solar Energy.

The build-out will not be easy for Morocco, which ranks in the bottom half of the world’s countries in terms of GDP. To help move Morocco’s renewables agenda forward, international finance agencies such as the World Bank, African Development Bank Group and European Investment Bank have provided loans and credit assurances to the projects.

The International Energy Agency, in a detailed assessment of Morocco’s energy policy completed last year, said the country has implemented several key reforms to its energy markets, resulting in an 80 percent increase in electricity availablilty over the last 20 years. While the increase in electricity access has aided economic growth, it has also stretched the country’s generation capacity and required even more energy imports.

To help close the supply-and-demand gap, IEA recommended among other things that Morocco "optimise the deployment of solar power, maximising the use of concentrated solar power at peak hours and facilitating the use of photovoltaics."