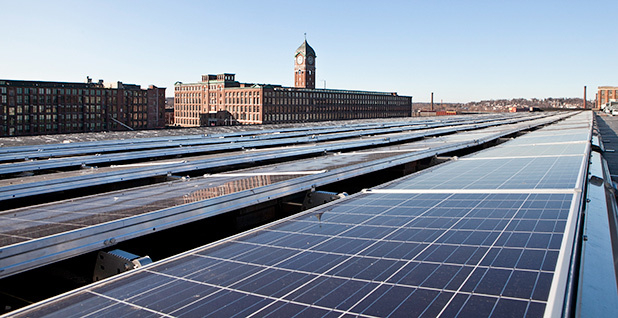 Solar panels across a low-income housing complex known as Union Crossing in Lawrence, Mass. The state with the second-highest solar distribution in the nation is eyeing rolling back the policies that made it a renewable energy leader. Photo courtesy of Boston Community Capital.

An energy battle royal is brewing in Massachusetts as legislators consider rolling back policies that encourage solar owners to sell power from their rooftop photovoltaic systems back to the electricity grid.

Legislation being hashed out in Boston this spring could slash by 75 percent the rate of compensation utilities pay to customers who participate in solar net-metering programs across the commonwealth, from an average of 18 cents per kilowatt-hour to 4.2 cents per kWh.

Solar advocates say such a deep cut in net-metering rates would place billions of dollars of energy investment at risk in Massachusetts — currently the country’s No. 4 solar market — while eliminating key economic benefits that existing solar owners enjoy in one of the nation’s most expensive retail electricity markets.

"Opponents have tried to portray solar as a niche technology that’s driving up electricity costs," Emily Rochon, director of energy and environmental policy for solar financier Boston Community Capital, said in an interview. "Of course, that’s not true. But facts don’t really matter in this debate."

Since 2008, Rochon’s group has helped finance more than 4 megawatts of solar capacity for low-income communities and nonprofits across the state. Yet even as it has helped drive down energy costs for thousands of ratepayers, BCC expects to see much of its future solar work go away if the most sweeping net-metering reforms are implemented.

Electric utilities and their backers argue the opposite. They say net-metering reforms are necessary to sustain Massachusetts solar growth over the long term and that cuts to net-metering rates will level the economic playing field between those who choose to install solar systems and net meter their power, and those who don’t.

"We’re raising concerns because the cost to comply with solar targets is having a major impact on the electricity costs of our residential, small commercial and large industrial customers," said Michael Durand, a spokesman for Eversource Energy, which provides power to 1.4 million customers in Greater Boston, much of Cape Cod and Martha’s Vineyard, and parts of western Massachusetts.

Mary-Leah Assad, a spokeswoman for National Grid, said the utility is a "huge supporter" of solar power, noting that the company completed 15,000 solar interconnections in 2015. "We’re not trying to slow it down; we’re trying to make it more affordable, because we see solar as being a big part of our energy future," she said

While hope remains for a legislative fix that can keep solar at the center of Massachusetts’ energy transition, the stakes are getting painfully high for solar companies like RePower Partners LLC of Lexington, Mass., which has seen a number of its commercial projects put on hold as legislators weigh their options.

"These are local small businesses — a plumber, a lumber company, a custom homebuilder. They all want to go solar," said Mark Sandeen, the founder of the 7-year-old solar firm, who is also president of MassSolar, a trade organization lobbying lawmakers in Boston.

"They have good-sized storage sheds and excellent rooftops for solar, yet we’ve been working with them to get these projects approved for a couple of years now," he said.

Those projects may soon be on indefinite hold.

Under the most sweeping reform proposal, projects like those Sandeen is building would receive lower, wholesale rate credit because they exceed 10 kilowatts under single-phase metering and 25 kW under multi-phase metering. Smaller systems, mostly designed to power private homes, would continue to receive the full retail rate.

Most of Boston Community Capital’s projects also would also not qualify for retail-rate net metering, Rochon said, because they aggregate solar production for multi-family dwellings and larger buildings. If the steepest rate reductions pass, she said, low-income solar projects will become a thing of the past in Massachusetts. “Basically nobody is going to build them,” she said.

Other solar developers are in similar or worse straits, having delayed or canceled hundreds of megawatts of planned solar projects in nearly every corner of the state. Critics further note that much of the state’s estimated 15,000 solar-sector workers could begin receiving pink slips just as the spring and summer construction season heats up.

National Grid PLC, for example, has not approved a retail-rate net-metered solar project of larger than 25 kilowatts since April 2015, when it reached its state-imposed cap of roughly 465 MW from systems larger than 10 kW for single-phase inverters and 25 kW for multi-phased inverters. Eversource Energy is expected to reach its 524 MW cap for similarly sized projects in a matter of weeks.

Assad said National Grid has approved 376 solar projects over 25 kW since hitting its retail rate caps last April. Of those, 35 have been interconnected, she said.

At the same time, another key incentive program for Massachusetts solar producers — called solar renewable energy certificates, or SRECs — also recently hit its state-imposed cap for projects larger than 25 kW, although the program is still accepting applications for smaller projects.

The SREC program, administered by the state Department of Energy Resources, has issued two rounds of credits since 2010, and its popularity among developers has helped drive Massachusetts’ deployment of more than 1,000 MW of solar to date.

Yet even as they pledge support for clean energy, Massachusetts lawmakers have been unable to decide what the state’s solar policy should look like going forward, creating considerable uncertainty for solar developers and financers alike, critics say.

Such an increase would provide sufficient breathing room for the industry to build out roughly a year’s worth of solar projects before returning to the Legislature for another increase request, officials said.

In a letter last week, roughly 100 members of the Massachusetts House of Representatives urged leaders to re-engage in negotiations over two bills that have been tied up in a conference committee since last year. The lawmakers expressed concern that one of the two bills, H. 3854, which passed in November, would cause irreparable harm to the state’s solar industry by lowering net-metering compensation from retail to wholesale rates.

They also pointed to a state-commissioned task force’s finding that every $1 invested in solar energy in Massachusetts yields $2.20 in benefits to the state.

"We hope you can advance a bill to a floor vote at the earliest opportunity in order to restore investments in our communities and allow businesses to rehire workers who lost their jobs as a result of the net-metering caps," they said.

Massachusetts municipalities have also weighed in, saying their commitments to build more solar arrays to meet a state solar target of 1,600 MW were being undermined by the Legislature’s wavering support of net metering and its failure to extend the SREC program, which was instituted by the administration of then-Gov. Deval Patrick (D).

Patrick left office in January 2015 and was succeeded by Gov. Charlie Baker, a Republican who has committed to lower Massachusetts electricity rates. Baker has offered his own set of net-metering reforms as part of an energy package that calls for importing more hydropower from Canada, among other things.

In a Feb. 3 letter, the Massachusetts Municipal Association said it "strongly supports lifting the net metering cap" and asked that the legislative conference committee "take action to allow communities to continue their good work in helping Massachusetts meet its solar goals."