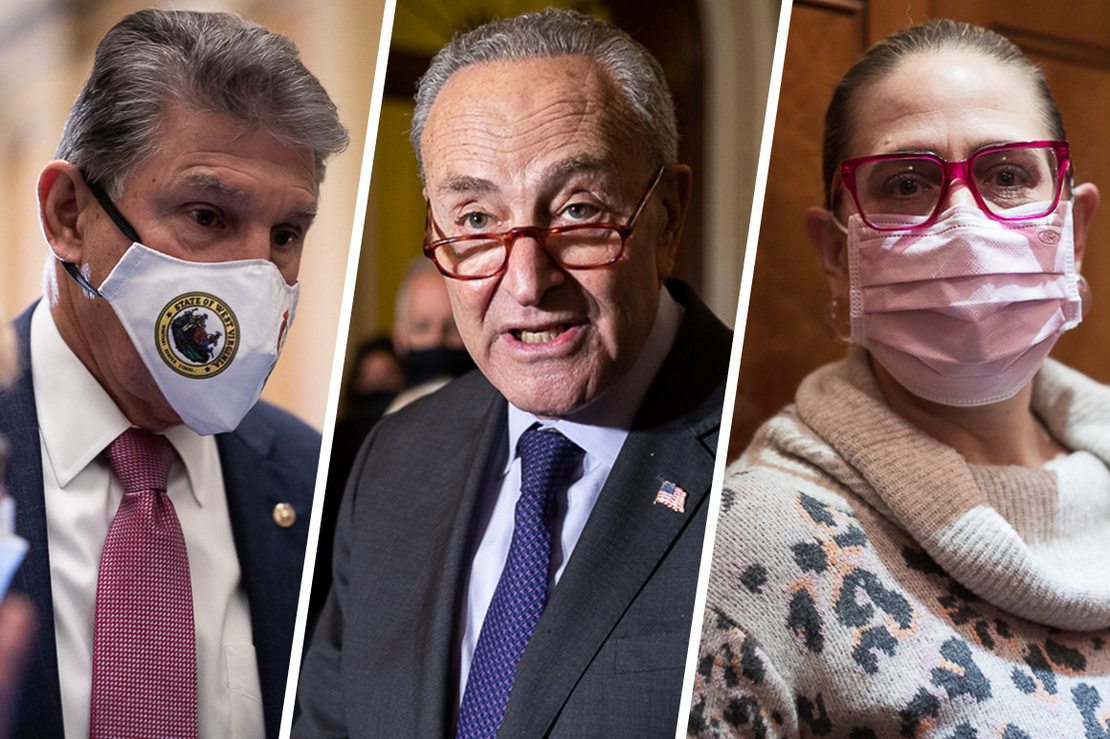 But while the New York Democrat has a schedule in mind and a vision for how to get the work done, he is also contending with forces beyond his control.

There’s a tight calendar packed with other time-sensitive legislative priorities, like passage of the still-stalled National Defense Authorization Act and an agreement on whether to raise the debt limit.

At the same time, the House-passed, $1.7 trillion reconciliation bill, H.R. 5376, is also moving through the onerous review process by the staff of the Senate parliamentarian to confirm that each line item complies with the so-called Byrd Rule — so named for the late Senate Majority Leader Robert Byrd (D-W.Va.) — which states that each provision must have some direct impact on federal spending or revenues.

In a letter to colleagues yesterday, Schumer said that the eight Senate committees with jurisdiction over some portions of the reconciliation bill had already submitted their proposed language to the parliamentarian for review.

The goal, he continued, was to complete, over “this week and next,” the necessary “bipartisan Byrd Bath meetings” where Republicans can argue for the removal of certain provisions on the grounds of noncompliance with the Byrd Rule.

Republicans are setting their sights on removing a number of Democratic priorities currently in the bill, including a new fee on methane, a repeal of the 2017 green light to drill in the Arctic National Wildlife Refuge and the imposition of higher royalties on oil and gas drilling on federal lands (E&E Daily, Dec. 3).

While there’s no way to predict the fate of these provisions, Democrats are projecting confidence that they will survive the process. However, the more policies that are taken off the table as non-Byrd complaint — including those in the current, $555 billion climate portion of the legislation — the harder it could be to keep together a fragile coalition of supporters who have drawn red lines around certain issues.

“This is arduous work,” Schumer said in remarks on the Senate floor yesterday. “It takes time, precision and a lot of pieces moving together. It has taken months of communication, negotiation, countless late nights and weekend workdays to bring us to this point.”

This “arduous work,” said Schumer in the “Dear Colleague” letter, could translate into an onerous schedule for lawmakers and their staffs.

“There are more long days and nights, and potentially weekends, that the Senate will be in session this month,” he warned.

‘An awful lot on climate’

At the same time, negotiations on certain climate policies with Senate Energy and Natural Resources Chair Joe Manchin (D-W.Va.) that fall outside the parliamentarian’s purview remain ongoing and, in many cases, fluid.

For instance, even if the methane fee is ruled germane by the parliamentarian, Manchin has signaled his concern about the provision, calling it “a regressive tax that harms the energy our country needs.”

Speaking with reporters on Capitol Hill yesterday, Manchin continued to demur on where he stands on any specific issue and if he’ll even allow the reconciliation bill to come to the Senate floor for a vote in the coming days.

“We’re talking about a tremendous overhaul of our climate positions that we have,” he said, “and we’ve done an awful lot on climate — clean climate — with the infrastructure bill.”

“There’s still an awful lot more that we can do working together,” Manchin continued, “but I’ve always said there’s a balance between the economy and the environment.”

Sen. Tom Carper (D-Del.), the chair of the Senate Environment and Public Works Committee, who expects his panel’s Byrd Bath to happen “in the middle of this week,” told E&E News that negotiators were “still working on a couple of fine points” related to the methane fee.

“I think we’ve taken a good idea and we’ve made it a whole lot better, so I’m very grateful to everybody who’s been a part of that,” Carper said.

Based on initial griping from Manchin and moderate Texas Democrats in the House, Carper helped negotiate a compromise in October that would assess a methane fee on oil and gas facilities and offer $750 million in new subsidies to reduce those emissions. He didn’t say yesterday how they might be further tweaking that language (Greenwire, Oct. 28).

Sen. Angus King, a Maine Independent who caucuses with Democrats and has been outspoken about the need to curb methane pollution as a means of combating climate change, yesterday sought to temper expectations by saying that if the matter weren’t dealt with in the reconciliation bill, the Biden administration could address it through regulations.

He also painted a rosy picture of the legislation without the inclusion of the $150 billion Clean Electricity Performance Program, or CEPP, which was once the centerpiece of the Biden climate agenda but was scrapped from reconciliation after Manchin objected to the framework on the grounds that it would be punitive.

“There are still important provisions with regard to electrification, transmission improvement,” King said, “so I think it’s still a very solid bill.”