Staffers get back to work on lead rule 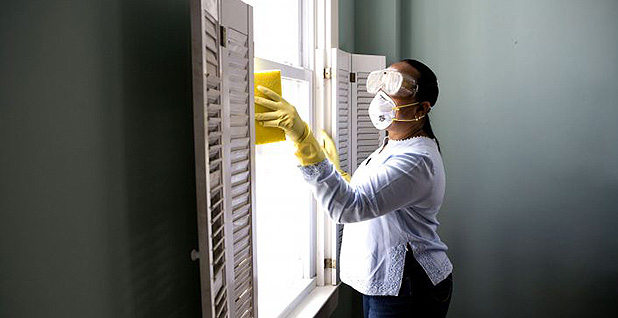 A woman cleaning a window in an older home while wearing personal protection equipment. Cade Martin/Dawn Arlotta/U.S. Center for Disease Control and Prevention/Pixio

EPA employees responsible for lead dust hazard standards are back at the office this week, despite the government shutdown, to ensure the agency can meet a court-ordered deadline.

But the other deadlines for rulemakings included in settlements with environmental groups could be pushed back as many include language allowing delays in the event of a government shutdown.

During his confirmation hearing yesterday, acting EPA Administrator Andrew Wheeler told senators on the Environment and Public Works Committee that staff have "charted out what the court-ordered deadlines" are to figure out which staff have to work unpaid during the shutdown.

"We recalled people this week to work on the lead dust regulation," he said.

On Monday, EPA updated its shutdown contingency plan to expand the number of "excepted" employees working during the shutdown to 891, up from the 812 listed in a plan released last month (Greenwire, Jan. 15).

EPA’s press office did not respond to questions about how many of those employees are working on the lead dust hazard standards.

The lead rule, proposed in June 2018, must be finalized by late June of this year. That deadline was set in a decision by the 9th U.S. Circuit Court of Appeals, which does not mention the possibility of a government shutdown.

Environmental Defense Fund chemicals policy director Tom Neltner said it’s better that staff are working on the actual rule rather than trying to get it delayed.

"I’m glad to see that instead of wasting the resources to go back to the court because of the shutdown, they are actually trying to get it done and meet the deadline," he said.

A court-ordered deadline similarly allowed EPA and Department of Justice staff to work during the shutdown on finalizing a $550 million settlement with Fiat Chrysler Automobiles over cheating on auto emissions tests (Greenwire, Jan. 10).

EDF is among a number of environmental groups that have slammed the lead dust standards rule proposed last June for not adequately protecting human health.

"It’s a good step," Neltner said, referring to EPA’s efforts to meet the deadline. But he wishes EPA could keep working on regulations for other toxins such perchlorate and per- and polyfluoroalkyl substances, or PFAS.

EPA’s work on the lead standards during the shutdown, however, is unusual.

While there are upcoming deadlines for other EPA rulemakings set forth in consent decree agreements with environmental groups, many of those include language allowing for a delay if a government shutdown occurs within 120 days of a deadline. As a result of the court order, the lead dust deadline did not have language calling for a delay in the event of a shutdown.

Such clauses are "pretty standard" in agreements where EPA is a defendant and is required to take an action by a specific deadline, said Eric Schaeffer, former director of civil enforcement at EPA under the Clinton and Bush administrations.

"With a government shutdown, that time doesn’t count, you aren’t allowed to work," he said.

"One of the things we saw was that we had to deal with all these individual case deadlines," Mallory said.

She wasn’t aware of how widely the clauses have been implemented since 2013. She noted, however, an advantage of the extension clause is that it gave the agency flexibility and made it a lot easier for EPA to plan ahead for what would happen in a shutdown.

"You don’t have to assume you have to bring people in," she said.

As a result of the clause, EPA will get an extension on the April 30 deadline to propose drinking water standards for perchlorate.

The agency’s consent decree with the Natural Resources Defense Council "recognizes that the possibility exists that circumstance outside the reasonable control of EPA could delay EPA’s compliance with the obligations contained in this Consent Decree."

Those circumstances include "a lapse in appropriations by Congress resulting in a government shutdown."

Since the deadline is less than 120 days away, it will automatically be bumped one day for each day the shutdown continues.

The provision also allows EPA to push back deadlines by 14 days in the event a natural disaster affects agency operations.

Mallory said EPA wouldn’t have to notify the other party if it was delaying action during a shutdown because it was "an understood part of the process." However, she expected EPA would flag parties in cases where there were significant deadlines pending.

"I believe that clauses such as the one referenced below are prudent under the circumstances of a government shutdown that necessarily delays the completion of regulatory work addressed in a settlement agreement," said Avi Garbow, former EPA general counsel under the Obama administration, in an email.

The shutdown language is also present in a consent decree between EPA and the Environmental Integrity Project requiring the agency to review standards for oil and gas production waste under the Resource Conservation and Recovery Act by March 15 of this year.

EIP Attorney Adam Kron said he has seen similar language in other consent decrees, but this is the first time such a clause has become relevant to a case he’s worked on.

"I’ve never seen it in effect before, but I guess it’s triggered now," he said.