State lawyers use Pruitt’s playbook against him — by suing 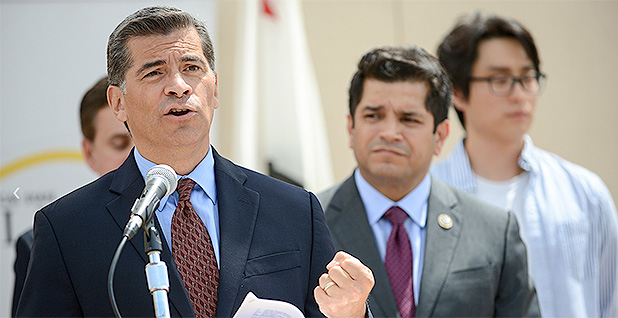 When Scott Pruitt was Oklahoma’s top attorney, he made a name for himself by suing the Obama administration.

Pruitt teamed up with other Republican state attorneys general to launch more than a dozen court challenges to U.S. EPA rules — including multiple attacks on the high-profile Clean Power Plan, a lawsuit against EPA’s signature water regulation, and cases to combat standards on mercury and other air pollutants.

Now, as President Trump’s EPA administrator, Pruitt is on the flip side, facing a legal onslaught from Democratic attorneys general he’s long sparred against in court. And as Pruitt attempts to use his new position to unravel Obama-era climate rules he’s long fought, his foes are hoping attorneys general who oppose Trump will take a page from Pruitt’s past playbook.

State lawsuits against the new administration’s environmental policies are already piling up as Democratic attorneys general seize on climate change as a central battleground in their legal war with President Trump. Bloomberg and former Obama administration officials have launched a new effort to help states fight any efforts to roll back climate and environmental policies. And with both chambers of Congress held by Republicans, many see attorneys general as the left’s best hope for contesting Trump’s climate change agenda.

Hayes is the executive director of the newly launched State Impact Center at the New York University Law School. The group’s mission is to help AGs "fight against regulatory roll-backs and other actions that undermine key clean energy, climate change, and environmental values and protections." The center is funded by nearly $6 million in grant money from Bloomberg Philanthropies, the charity of the former New York mayor and environmentalist (Greenwire, Aug. 17).

Take the high-profile lawsuit Massachusetts v. EPA, for example, in which a 2007 Supreme Court opinion was issued determining that EPA had the authority to regulate greenhouse gases under the Clean Air Act. In that case, Massachusetts and other states were challenging the George W. Bush administration’s argument that the Clean Air Act didn’t allow the agency to clamp down on those emissions. The court’s decision paved the way for the Obama administration to issue greenhouse gas limits.

In another high-profile climate case, states led by West Virginia sued the Obama administration over the Clean Power Plan in a complex case that still hasn’t been resolved. Pruitt was among the attorneys general involved in that case, in which the Supreme Court took the highly unusual step of intervening to stall the rule while litigation played out in a lower court.

‘I go into the office, I sue the federal government’

"There’s always been tension between red states and blue administrations over environmental and natural resource policy; that isn’t new. But this was of a different tenor," said Pat Parenteau, a professor at Vermont Law School. "The animosity, the hostility to almost everything the Obama administration did — certainly on the environment — was marked, dramatic, of a different scale."

Parenteau pointed to Pruitt in Oklahoma, West Virginia Republican Attorney General Patrick Morrisey (who is now running for Senate) and former Virginia Republican Attorney General Ken Cuccinelli as some of the most aggressive attorneys general who did combat with the Obama administration. Pruitt’s LinkedIn page still bills him as "a leading advocate against the EPA’s activist agenda."

Texas Gov. Greg Abbott (R) — who sued the Obama administration numerous times during his tenure as the state’s attorney general — said in 2013 of his job, according to PolitiFact: "I go into the office, I sue the federal government, and I go home."

"Are Democratic AGs using that same playbook? Yes," said Bob Ferguson, Washington state’s Democratic attorney general, "although I would add we are having greater success than the Republican AGs did."

Pruitt’s critics are quick to note his mixed track record challenging the Obama administration on climate change and other issues in court. Most of the cases he filed against the Obama EPA were unsuccessful (Greenwire, Dec. 8, 2016).

The current EPA boss’s biggest court win came when the Supreme Court agreed to put the Clean Power Plan on hold. That litigation is now on ice as the Trump administration has pledged to redo the policy.

The Democratic attorneys general who were initially supporting that rule in court are now fighting the Trump administration’s efforts to roll it back.

Schneiderman is among the most vocal attorneys general when it comes to fighting Trump’s climate agenda. Others include Ferguson and fellow Democrats Xavier Becerra of California and Maura Healey of Massachusetts.

"I think AGs are the most consequential political office right now with this administration," Ferguson said. He thinks they’ll be "critical" as the Trump administration is "systematically trying to roll back environmental protections established by the Obama administration."

"There may be no better example of how the Trump administration is quickly and quietly trying to deregulate, defund and destabilize our basic regulatory infrastructure than environmental policy," she added. "AG Schneiderman and his colleagues have already filed a number of legal challenges to protect our communities’ health, air and water."

As lawsuits pile up, the important question will be, "What’s the success ratio?" said Ferguson.

With Pruitt now on the receiving end of these lawsuits, "I’m sure he’s not surprised," Ferguson said. "I think it’s just the new normal."