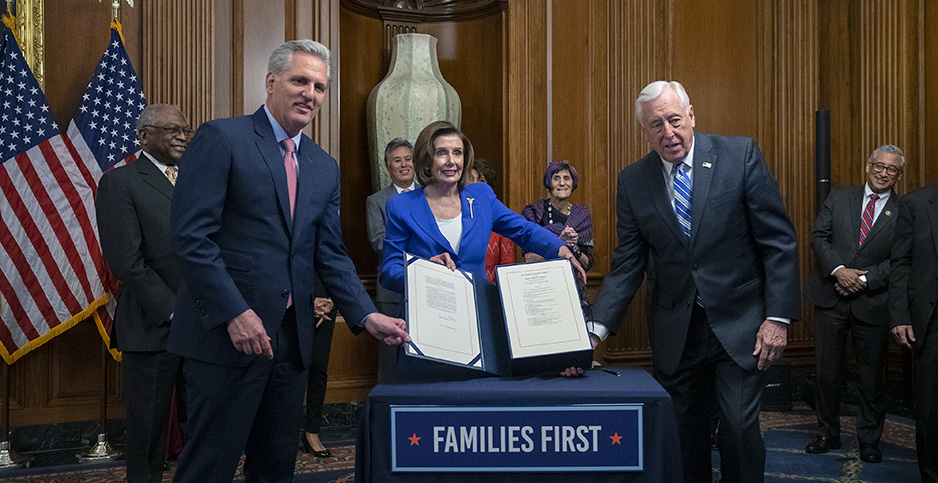 The worsening health and economic fallout from the COVID-19 pandemic are upending the next phase of stimulus talks, with Democrats eyeing immediate further assistance to individuals and small businesses.

Following Friday’s record-high unemployment report, which showed 700,000 lost jobs in March, Speaker Nancy Pelosi (D-Calif.) told House members over the weekend that the next stimulus will echo the priorities Democrats fought for in the $2 trillion Coronavirus Aid, Relief and Economic Security (CARES) Act package signed into law just 10 days ago.

"We must double down on the down-payment we made in the CARES Act by passing a CARES 2 package, which will extend and expand this bipartisan legislation to meet the needs of the American people," Pelosi wrote Saturday.

The upcoming legislation, which Pelosi said she hopes to bring to the floor later this month, would also provide "desperately needed resources for our state and local governments, hospitals, community health centers, health systems and health workers, first responders and other providers on the frontlines of this crisis."

Missing from the speaker’s weekend "Dear Colleague" letter was any mention of infrastructure, which just four days earlier Pelosi had indicated would be a major focus of the fourth legislative response to COVID-19 (E&E News PM, April 1).

That bill was to be modeled on the $760 billion infrastructure plan unveiled by House Democrats in January, which would have included tens of billions of dollars for water system and electric grid upgrades.

In an appearance on CNBC on Friday, Pelosi signaled that items included in the broader infrastructure bill may need to wait for an even later COVID-19 stimulus bill.

"While I’m very much in favor of doing some of the things that we need to do to meet the needs — clean water, more broadband and the rest of that — that may have to be for a bill beyond this," she said.

The shift in tone in recent days suggests the next stimulus will revive the controversies of the first three COVID-19 emergency bills, including individual direct payments, unemployment benefits, more funds for health care and medical supplies, and oversight of the just-enacted $2 trillion package — the largest in U.S. history.

That could again sideline broader economic aid for clean energy sectors and drinking water upgrades sought by many Democrats.

Conservation and outdoor recreation groups also are working to get the "Great American Outdoors Act," S. 3422, included in a future coronavirus stimulus package.

"I know there is a real interest in broadening the next stimulus package," said Rep. Jared Huffman (D-Calif.), who leads the Natural Resources Subcommittee on Water, Oceans and Wildlife. "Our natural infrastructure has to be part of our broader national infrastructure initiative."

The legislation would permanently fund the Land and Water Conservation Fund and make a $9.5 billion investment in fixing the country’s ailing parks and public lands.

"We may have a window of opportunity here," said Huffman, who added that there was momentum behind the bill even before the pandemic.

Still, House Appropriations Chairwoman Nita Lowey (D-N.Y.) said this weekend that the next stimulus under construction will aim more broadly at infrastructure.

"We can build a more resilient economy with robust investments in smart, safe infrastructure, including bringing clean water and the promise of high-speed broadband to every American community," Lowey said in the Democrats’ weekly address.

Republicans have been cool to Democrats’ calls to quickly move more stimulus, noting that the ink is barely dry on the last one.

McCarthy called it premature to even talk of more stimulus, although he wouldn’t rule out infrastructure in subsequent COVID-19 legislation (see related story).

"I am for infrastructure in the future, but the one thing I do want to make sure is that it is targeted, that it works. I have been through the experience of what these shovel-ready projects are and saw the waste that was used. I do not think this is the time and place for that."

However, McCarthy is among the GOP lawmakers from oil districts who have expressed support for President Trump’s call to fill the Strategic Petroleum Reserve with private-sector crude. The administration unsuccessfully sought $3 billion to enable an SPR purchase in the last stimulus talks.

In addition to the SPR funds, Senate Finance Chairman Chuck Grassley (R-Iowa) told reporters last week that another provision in play during recent negotiations would have preempted state laws to build oil pipelines.

Meanwhile, the two parties and the White House are also increasingly at odds over congressional oversight of the $2 trillion CARES Act.

Trump stoked controversy Friday by nominating a White House lawyer to be the special inspector general for pandemic recovery — a position created by the new law that was added at Democrats’ insistence to facilitate Hill oversight of the more than $500 billion in federal loan authority contained in the measure.

Trump’s pick, Special Assistant to the President and White House Senior Associate Counsel Brian Miller, did little to assuage Democrats already unhappy with a Trump signing statement that said he may ignore parts of the law (Greenwire, March 30).

Senate Minority Leader Chuck Schumer (D-N.Y.) panned Trump’s pick. "This oversight position, which will be responsible for overseeing hundreds of billions of taxpayer dollars, requires complete independence from the president and any other interested party to assure the American people that all decisions are made without fear or favor," Schumer said in a statement.

"To nominate a member of the president’s own staff is exactly the wrong type of person to choose for this position," said Schumer.

In the House, Democrats and Republicans are at odds over Pelosi’s proposal to create a select committee to conduct oversight of the law, which top GOP leaders last week slammed as unnecessary and politically motivated (E&E News PM, April 2).

House Majority Whip Jim Clyburn (D-S.C.), who will chair the panel, dismissed accusations that its work will be aimed at undermining Trump, calling it an appropriate instrument for Congress to oversee the massive law.

"We’re not going to be looking back on what the president may or may not have done back before this crisis hit," Clyburn said yesterday on CNN’s "State of the Union."

"The crisis is with us. The American people are now out of work, millions of them out of work. The question is whether or not the money that’s appropriated will go to support them and their families, or whether or not this money will end up in the pockets of a few profiteers."