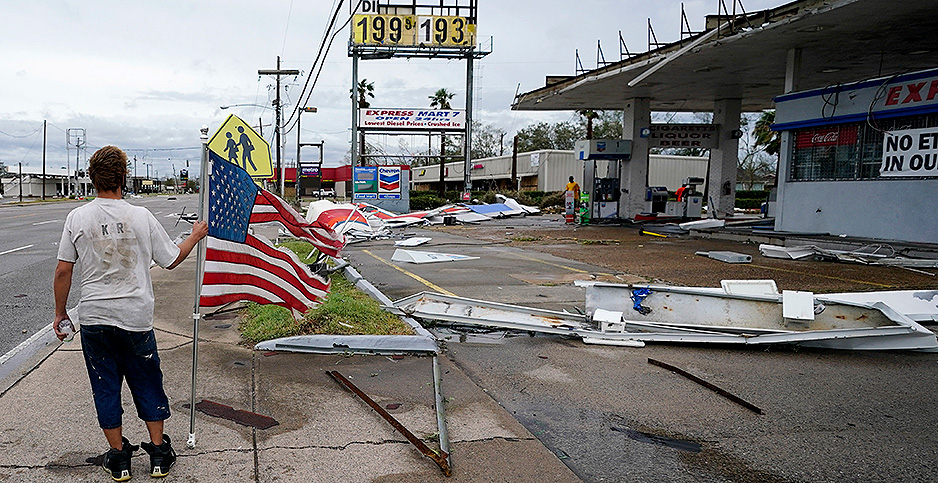 Louisiana began preparing for a long cleanup after Hurricane Laura swept through the southwest corner of the state, leaving at least one person dead, industrial sites shut down, and homes and businesses wrecked.

The Category 4 storm packed winds of 150 mph when it struck the coast near Cameron, La., at about 1 a.m. local time.

Early reports said the storm surge was lower than predicted, but the National Hurricane Center discounted those reports. The surge just east of the storm’s landfall at Cameron was very likely 15 feet or higher, but there were no observation systems working along that stretch of the coast, said Jamie Rhome, head of the center’s storm surge team (Energywire, Aug. 27).

More than 700,000 homes and businesses in Louisiana and Texas were without power this morning, according to a tally on PowerOutage.US.

Workers are arriving from more than 20 states to help get lights and air conditioners running again — but outages could be lengthy.

As of 10:20 a.m. CDT today, Entergy Corp.’s website showed more than 227,000 Louisiana customers and over 116,000 Texas customers without power. The company said outages could last for weeks in the hardest-hit areas.

"We have more restoration crews pre-positioned in Louisiana than ever before, but nobody should think that this is going to be a quick process getting the electricity back on," Louisiana Gov. John Bel Edwards (D) told CNN this morning.

Federal Emergency Management Agency Administrator Peter Gaynor said this morning that damage appeared to be less than was initially feared, but reports were slow to come in from Cameron Parish, where land line and cellphone service appeared to be out.

Gaynor said wind damage assessments may change that calculation once officials are able to access storm-battered areas near Laura’s landfall point. Search and rescue teams were canvassing the area after dawn but had not reported widespread deaths based on early reports.

The full extent of surge damage may come later today as aerial and ground surveys allow for a clearer picture. The NHC cautioned against placing too much confidence in early reports out of coastal Louisiana, comparing today’s initial reporting to Katrina in 2005.

"If you look back at Katrina, everybody said New Orleans got spared, then we found out it wasn’t. It took several hours before we understood just how bad it was there after Katrina," Rhome said.

Meanwhile, at least one death was reported — a 14-year-old girl was killed when a tree fell on her home, the Associated Press reported.

And a chemical leak involving chlorine in Lake Charles, La., forced emergency personnel to avoid Interstate 10, the main highway through the area, the Louisiana State Police said on Facebook. Television station WGNO posted photos of a vapor or smoke cloud crossing the highway.

Elsewhere in Lake Charles, the storm blew the glass out of hundreds of high-rise building windows, knocked down trees, and tore the roofs and walls away from single-family homes, according to local media reports.

Prior to the storm, refinery shutdowns had taken 2.2 million barrels a day of capacity offline. At least one major refiner, Motiva Enterprise’s 600,000-barrel-a-day plant in Port Arthur, Texas, was preparing to restart today, according to state environmental regulators.

And even at their peak, the shutdowns weren’t likely to affect the price of gasoline. Refineries nationwide were running at about 82% of capacity before the storm because of the coronavirus pandemic and the recession, according to the investment bank Tudor, Pickering, Holt & Co.

"The loss of 12% of available capacity hasn’t been enough to move the needle," the bank said in a note to clients.

Both of the area’s liquefied natural gas terminals — Cheniere Energy Inc.’s plant in Sabine Pass and Cameron LNG’s plant outside Lake Charles — closed ahead of the storm. Kinder Morgan Inc., the pipeline company, closed one of its gas pipelines serving the region until Sunday, according to a force majeure notice on the company’s website.

Feed gas flowing to the region hit its lowest point since February 2019, according to RBN Energy. The downturn could be significant for gas producers, because LNG exports account for about 10% of gas use, and the export terminals could be closed for awhile.

"Once the storm passes, there’s still the aftermath, waiting for any flooding and other physical impacts to subside, bringing personnel back and returning operations to normal, all of which takes time," the firm said in a research note.

The storm was still producing 75 mph winds as it moved north over Louisiana at about 10 a.m. CDT, according to the National Hurricane Center. It was expected to continue into Arkansas tonight before turning to the east and striking the Mid-Atlantic states Saturday.

In Port Arthur, which was heavily flooded by Hurricane Harvey in 2017, the damage was minimal and people largely complied with evacuation orders, Mayor Thurman Bartie told TV station KFDM.

"We were blessed that what could have happened didn’t happen," he said.

Entergy, based in New Orleans, said it activated over 13,000 workers — including employees, contractors and people from a mutual assistance network — to help restore electric service for customers affected by Laura.

"Once it is safe, our damage assessment teams will patrol the lines and view the facilities to determine how much the storm damaged our electrical system," Entergy said.

The company said it’s taking extra measures because of the COVID-19 pandemic, including more use of drones, adjusting crew staging sites and traveling separately when possible.

"Customers may see extended power outages," Entergy said. "Given the intensity of this storm and the additional need for our crews to follow COVID-19 public health guidelines, power restoration work may take longer, especially where there are widespread outages. In addition, restoration may be hampered by flooding, blocked access or other obstacles."

Entergy Texas cautioned that, while it "was spared the worst of Hurricane Laura’s impact, certain areas still suffered significant damage and we will need time to fully assess that damage."

In Houston, the city said the local emergency operations center was no longer activated in response to Laura after no reported impacts to Houston. The city said people who evacuated could safely return home.

But a news release offered a note of caution: "Residents should remain prepared throughout the entirety of the Atlantic Hurricane season, which runs through Nov. 30."

Lina Hidalgo, the Harris County judge whose Texas county is based in Houston, noted Laura’s strong landfall in Louisiana.

"It would have devastated us," Hidalgo said on Twitter. "We got lucky. This was a reminder that vigilance is the cost of living in this beautiful place we call home."