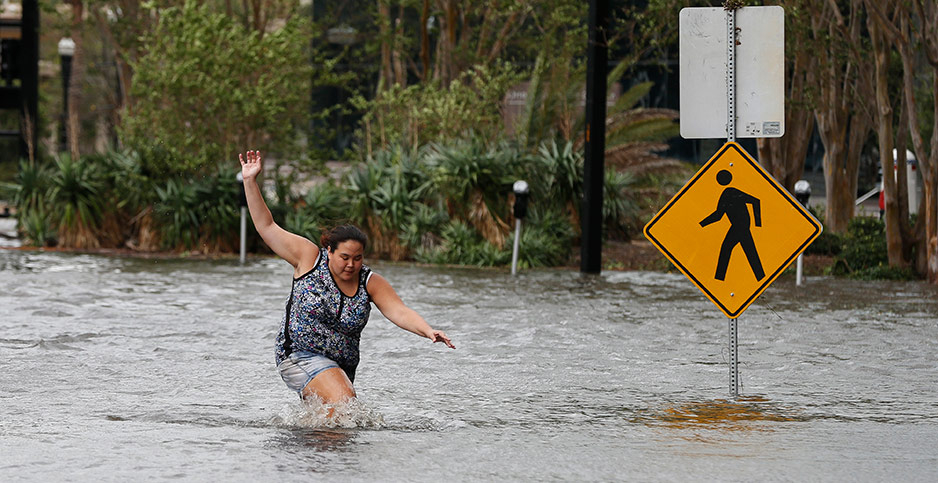 MIAMI — After a stormy night, most residents of South Florida awoke yesterday to find the sun shining on less damage than they’d feared Hurricane Irma might bring.

Farther north, those hopes were dashed as the St. Johns River in Jacksonville swelled from a powerful storm surge, triggering evacuations as record flooding spread across the state’s fourth-largest metro area.

Storm surge can be the most dangerous part of a hurricane, often killing more people than the wind. Sea-level rise makes them worse. Surges also offer a warning for what some coastal communities can expect in the coming decades as oceans rise and flooding becomes more common.

The leaden floodwaters give a glimpse of the future.

In Miami, the places Irma covered with water aligned with areas projected to face greater tidal flooding in the next few decades, said the city’s chief resilience officer, Jane Gilbert. The surge was more intense and the processes are different — but the signal is the same.

"It makes it more real for certain people that we have increasing flood risk," she said. Miami will soon ask voters to approve $400 million in bonds for projects to harden the city against flooding that comes with sea-level rise. Irma’s surge might show people why those projects are so important, she said.

Dramatic footage showed the surge covering Miami’s financial district in several feet of water. Most of that had receded by yesterday afternoon, with only a couple of inches pooling over the major thoroughfare of Brickell Avenue, a few blocks from the waterfront. Nearby, workers pumped more water from a parking garage while Carl Cappo swept away sand that the water had dropped around his high-rise.

Cappo manages the property, and he watched from his oceanfront apartment window as Irma pushed water onto the streets. Normally, the waves crest more than 3 feet below the road, he said, but the storm brought them surging several feet up the building’s walls. He thought of Hurricane Harvey and the floodwaters that still stand around Houston.

"I saw visions of Texas, and I thought we were going to be [like] Texas for the next month. But if you look, it’s completely dry here," he said, judging the storm less damaging than Hurricane Wilma in 2005.

In Jacksonville, Irma has left a more drastic legacy.

The storm surge came atop nearly a foot of rain that fell over Jacksonville and its population of 1.5 million early yesterday.

"Parts of those neighborhoods already look like they’ve been claimed by the St. Johns, which in downtown is a brackish river heavily influenced by ocean tides," The Florida Times-Union reported shortly after noon yesterday.

Fallen branches covered neighborhoods in Miami-Dade County, but the worst damage seemed to be the occasional tree laid across a back street or tugging down utility lines.

Across the Biscayne Bay, evacuated Miami Beach residents walked past the checkpoints where police stopped vehicles. Waves crested just below the edge of the MacArthur Causeway as people shouldered sacks and trundled suitcases along the empty highway’s outer lane.

Miami Beach ranks among the American cities most vulnerable to climate change, and officials have outlined an ambitious plan to install several dozen pumps. Irma’s storm surge reportedly reached as high as 3 to 4 feet, according to city officials. But some residents said they had seen worse flooding from ordinary storms.

A few blocks from the beach, Ryan Sikorski took a break from sawing the fallen tree covering his yard to point out a curbside trickle too shallow to cover a shoe.

"This is the most water there really was last night," he said, calling it a surprise, since normal storms easily swamp some of the low-lying areas. "Three weeks ago, this whole street was flooded out."

Standing shirtless under the midday sun and sweating from his work, the 43-year-old shook his head: "We got lucky over here."

That isn’t true in Jacksonville.

The sprawling city sits about 15 miles inland from the Atlantic Ocean but is bisected by the meandering, slow-moving St. Johns River. It’s the economic hub of northeast Florida and home to the Navy’s third-largest domestic base, Naval Air Station Jacksonville, which remained shuttered yesterday.

Two warships stationed at nearby Naval Station Mayport — the USS Iwo Jima and the USS New York — were deployed in the Atlantic alongside the carrier USS Abraham Lincoln to assist with search and rescue "and a lot of other things," Gov. Rick Scott (R) said.

Scott, speaking at an afternoon press conference from Opa-locka after touring hurricane-battered regions of the Florida Keys and southwest Florida, cautioned residents that conditions could remain dangerous for several days, even as Irma exits the state and moves into Georgia, Alabama and beyond.

"The biggest threat for this week as Irma leaves Florida this week is river flooding, and most of that is going to be in the northern part of the state," Scott said.

While Florida became the second state in less than a month to suffer catastrophic flooding, White House officials continued to downplay the role that climate change may be having in juicing hurricanes (see related story).

At yesterday’s White House press briefing, Tom Bossert, the president’s homeland security adviser, answered a question about whether the recent hurricanes were informing the administration’s views about climate change.

"I think what’s prudent for us right now is to make sure those [federal] response capabilities are there," he said. "Causality is something that’s outside my ability to analyze right now. I will tell you that we continue to take seriously the climate change — not the cause of it but the things that we observe … things that would require prudent mitigation measures."

That dismissive attitude toward climate change makes Miami resident Alex Gonzalez wonder if Republicans really have Florida’s best interests in mind. He considers the GOP to be too close with the oil industry. But he says this Trump-supporting state bears some responsibility, too.

"At the end of the day, it’s our fault. We’re the ones who voted those people in," he said.

The 27-year-old looked out over the Miami waterfront.

"This is going to go in 50 years. It definitely can’t stay like this," he said. "It kinda sucks, because sometimes this is paradise. And we’re ruining it."