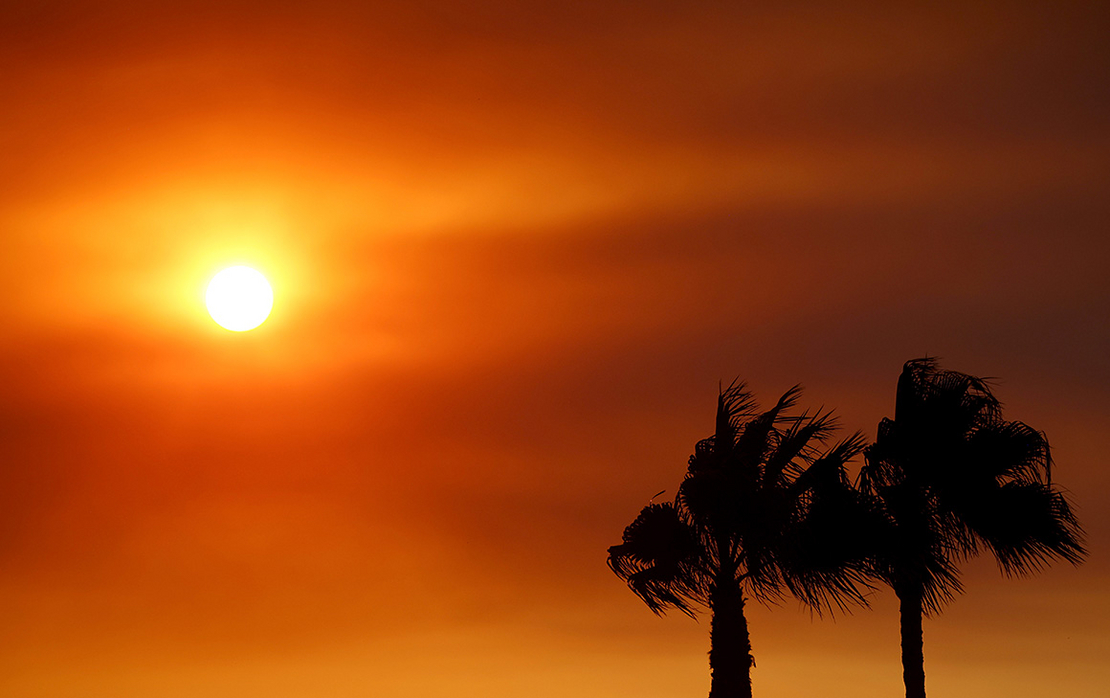 The sun sets through the haze of wildfire smoke as the Fairview Fire burns this week near Hemet, Calif. Mario Tama/Getty Images

September marks the start of a new season for meteorologists. It’s the beginning of “climatological fall” in the Northern Hemisphere — and, ostensibly, a transition to milder weather.

But much of the U.S. is still baking, burning, withering or swimming.

It’s the reality of life on a warming planet. Research suggests that the hottest part of the year is lengthening and the risk of extreme heat, and other heat-related disasters, is rising.

“We’re seeing increasing risks throughout the year as a variety of extremes increase in frequency and intensity in response to global warming,” said Noah Diffenbaugh, a climate scientist at Stanford University.

The dangers of the past week are plaguing the sunset of summer. Climate change, driven by a global rise of 2.2 degrees Fahrenheit over the last 150 years, is exacerbating financial losses from heavier downpours, more severe coastal storms and rising ocean levels. Entire ecosystems, like coral reefs, are being altered at lightning speed, and efforts to put the brakes on rising temperatures are mixing up global politics like a blender.

If that wasn’t enough for the beleaguered West, a Pacific hurricane is also closing in on the coast. Hurricane Kay is projected to make a rare close approach to California this weekend, threatening high winds and flash floods in its wake.

All of those perils are lying on top of perhaps the biggest impact of all: a yearslong drought that refuses to release its grip on much of the western half of the country.

Elsewhere in the U.S., devastating floods ushered in the month of September. North Georgia, southeastern Indiana and parts of Rhode Island were all slammed by unusually heavy rainfall and flash floods in the past week.

And the Atlantic hurricane season is revving up. Hurricanes Danielle and Earl abruptly formed after a lengthy dry spell in August.

Hurricane season officially lasts from June 1 until Nov. 1, so the storms aren’t unusual. Neither Danielle nor Earl is expected to pose a threat to the continental U.S. But after an unusual lull in July and August, they’re a sudden reminder that tropical cyclones are still a threat for at least two more months.

It’s climate disasters from coast to coast. And that’s only in the U.S.

On the other side of the globe, China continues to grapple with an extreme, long-lasting drought that’s gripped large swaths of the country for months now. Parts of the Middle East and North Africa have seen sizzling temperatures already breaking monthly records for September. And Greenland recently experienced a rare September melt event, one of its strongest on record (Climatewire, Sept. 8).

Diffenbaugh, the Stanford scientist, warned that extreme weather and climate-related disasters occur all year around. And certain types of events are bigger risks at different times of the year in different locations.

Still, summer is often considered the peak for extreme weather in much of the U.S. High temperatures increase the risk of heat waves, droughts, wildfires and extreme rainfall, which can cause floods.

And as the planet keeps on warming, many heat-related events are growing more frequent, more extreme and more likely to occur earlier or later in the year than they used to. Summer is dragging out — and so are the risks it brings.

Research generally suggests that summers are getting longer while the other three seasons are shrinking. A 2021 study found that the hottest time of the year — defined as the period when temperatures rise above the 75th percentile for any given region — has been expanding by an average of about four days per decade across the Northern Hemisphere (Climatewire, March 11, 2021).

The western wildfire season has also lengthened over time, research suggests. And the risk of severe blazes cropping up late in the year is rising. Climate change is increasing the odds of extreme autumn fire conditions, according to at least one study. And experts say these risks are dragging out into the winter as well (Climatewire, Dec. 7, 2020).

The Atlantic hurricane season also appears to be shifting. A recent study found that the season has been edging earlier in the year for decades now, likely driven by warming ocean waters (Climatewire, Aug. 17).

When climate disasters begin happening outside their typical seasons, Diffenbaugh pointed out, they can put a strain on the systems that were designed to deal with them.

For instance, the U.S. has agreements in places with other countries around the world, including Canada, Mexico, Australia and New Zealand, to share wildfire management resources as needed. But the wildfire seasons in California and Australia have begun to overlap in recent years, despite occurring in different hemispheres with opposite summers. That’s strained nations’ abilities to exchange resources.

In general, the increasing frequency and intensity of climate-related disasters is a strain on infrastructure. Much of human society was simply designed for a climate that no longer exists.

Updating these systems for a hotter, more extreme world should be a top priority, according to Diffenbaugh.