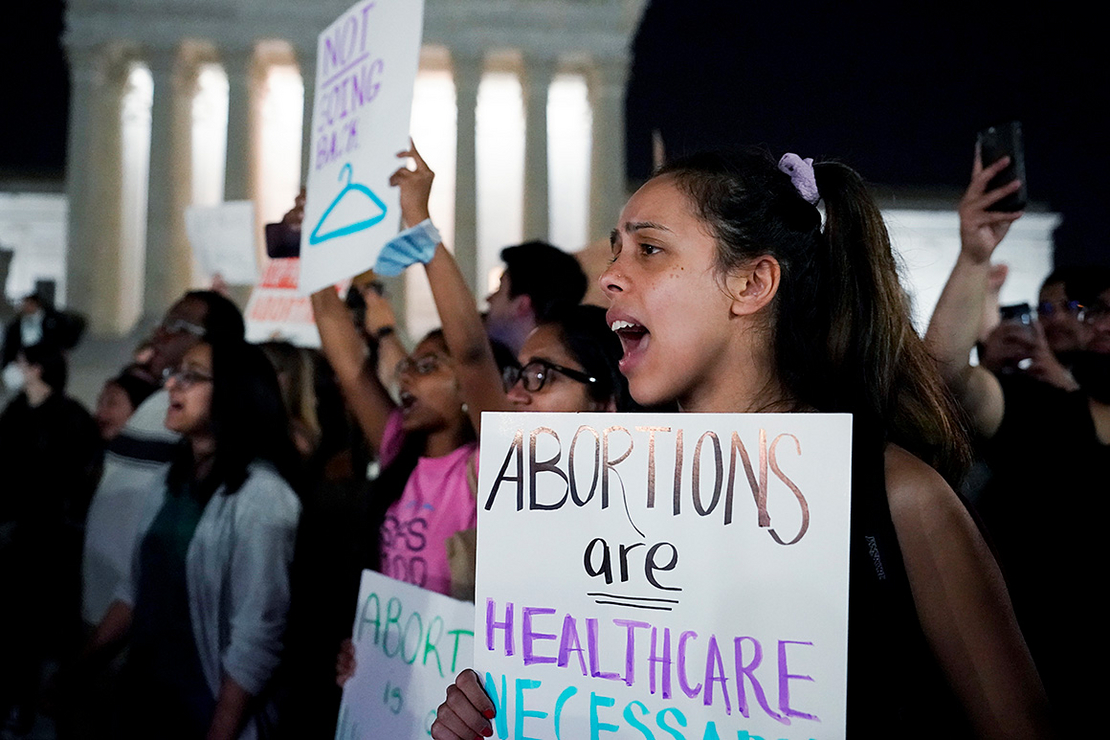 A crowd gathers outside the Supreme Court early this morning in Washington after POLITICO published a draft Supreme Court opinion suggesting that earlier this year a majority of the justices had thrown support behind overturning the 1973 case Roe v. Wade that legalized abortion nationwide. The draft marks a shocking revelation of the high court's secretive deliberation process, particularly before a case is formally decided. Alex Brandon/AP Photo

The bombshell draft opinion signaling that the Supreme Court is about to overturn Roe v. Wade has implications that reach far beyond abortion access and could affect environmental law and climate policy for years to come.

The blockbuster POLITICO report last night that the high court is preparing to strike down the landmark 1973 opinion is already reshaping conversations about the midterm elections, politicization within the court and the new conservative majority’s willingness to torpedo precedent even in cases long viewed as established law.

“This certainly shows that we have five justices on the court that are willing to cast aside precedent to achieve long-cherished conservative ends,” said Robert Percival, director of the environmental law program at the University of Maryland.

It’s unclear which, if any, environmental statutes could be in the court’s crosshairs. But environmental law experts and political insiders said the unprecedented leak of the Dobbs v. Jackson Women’s Health Organization draft decision drives home what some court watchers already suspected: This slate of justices is willing to dramatically reshape the nation’s legal landscape.

“If anyone is hoping SCOTUS is going to stand by their previous rulings, they’ve just been proven massively wrong,” said Jim Manley, a political strategist and former aide to then-Senate Majority Leader Harry Reid (D-Nev.).

The Supreme Court this morning confirmed that the draft ruling is authentic but not final, and Chief Justice John Roberts announced an investigation into the source of the “singular and egregious” leak.

One major climate change decision that the court could revisit: the narrowly decided 2007 ruling in Massachusetts v. EPA, which affirmed the federal government’s authority to regulate greenhouse gases under the Clean Air Act.

“Precedent is no obstacle to the Trump justices, despite what they said in the confirmation hearings,” said Pat Parenteau, a professor at Vermont Law School.

He thinks the precedent set in the landmark climate case is “very much in danger,” and he expects to see evidence of that when the court issues its ruling in the coming weeks in West Virginia v. EPA, which has the potential to whittle down the federal government’s climate authority (Greenwire, Feb. 28).

Bill Snape, a law professor at American University and an attorney with the Center for Biological Diversity, doesn’t think Massachusetts v. EPA is in immediate danger of being overturned.

The court’s conservative majority “feels safe in opening up that bottle” by overturning Roe, Snape said. If Massachusetts v. EPA is upended, “major federal common law tort actions would be filed with success,” he added. “This Supreme Court doesn’t want that.”

Last night’s leak also indicates that the justices may be poised to chip away at another key element of Massachusetts v. EPA — the finding in support of broad standing to bring climate cases, which, like abortion access, is a constitutional issue.

The Supreme Court’s draft Dobbs ruling, authored by Justice Samuel Alito, aims to differentiate abortion access from other precedents that could be in danger of being overturned. But the document notes that abortion cases have “distorted” and “diluted” other areas of the law — including standing.

“I wouldn’t be surprised if the court gets rid of all climate litigation by saying there’s no standing,” said Percival of the University of Maryland. “That’s something this energized conservative wing could do in the future.”

The leak itself could have a chilling effect on pro-environmental outcomes at the conservative-dominated Supreme Court, said Jonathan Adler, a professor at the Case Western Reserve University School of Law.

During the period between oral arguments and decision day in a case, justices trade draft opinions — like the one leaked last night — and sometimes try to convince their colleagues to vote against their initial inclinations. Vote lineups can change over the course of the process.

“If there’s less deliberation on the court,” Adler said, “does that mean that justices are more likely to just vote their priors?”

Such a shift could mark a sea change at the high court, where environmental advocates had in recent years still been able to notch some victories with the support of Roberts, who emerged as a key swing vote during the Trump administration and who publicly refuted claims that the court is a partisan branch of government.

After Justice Amy Coney Barrett joined the court in 2020, shifting the ideological balance from a 5-4 to a 6-3 conservative majority, she and Justice Brett Kavanaugh have at times voted with Roberts to avoid ideological outcomes in some cases.

According to POLITICO’s report last night, both Barrett and Kavanaugh voted alongside Alito during the court’s conference after the December arguments in the Dobbs case, meaning the draft decision would have at least five votes in support.

Roberts’ stance is still unclear, according to the report, but he alone does not have the power to shift the outcome of the case.

Last night’s leak appears to have confirmed suspicions among members of the public that the Supreme Court is now officially a political animal, said Percival of the University of Maryland.

“It makes the court look exactly like the political institution that [Roberts] said it wasn’t,” he said.

The Dobbs leak also reshapes the political landscape heading into the 2022 midterm elections and could affect how climate and energy policy negotiations shake out in the coming months. It could also affect which party controls Congress next year, as Democrats cling to narrow majorities in both chambers heading into the elections this fall.

Republicans and Democrats alike are hopeful that the political fallout from overturning Roe would boost their chances of winning seats in November.

If the court “does overturn Roe, it will fall on our nation’s elected officials at all levels of government to protect a woman’s right to choose,” President Joe Biden said today in a statement. “And it will fall on voters to elect pro-choice officials this November. At the federal level, we will need more pro-choice Senators and a pro-choice majority in the House to adopt legislation that codifies Roe, which I will work to pass and sign into law.”

Senate Minority Leader Mitch McConnell (R-Ky.) said the leak appears to have been orchestrated by the “radical left,” and he urged the Justice Department to “pursue criminal charges if applicable.”

Some legal observers said it is just as likely that the leak came from a conservative, potentially in an effort to dissuade Kavanaugh and Barrett from changing their votes before the court issues its final opinion in the case.

“People elected Democrats precisely so we could lead in perilous moments like these — to codify Roe, hold corruption accountable, & have a President who uses his legal authority to break through Congressional gridlock on items from student debt to climate,” she wrote on Twitter. “It’s high time we do it.”

Ahead of the November elections, the contentious battle over abortion rights could make compromise on already contentious issues like climate and energy even more elusive.

“I don’t see this unlocking any pent-up desires to cut deals on issues,” whether it’s abortion rights or climate change, said Manley, the former Reid aide.

“I think this is going to drive Congress further into a hyperpolarized environment.”