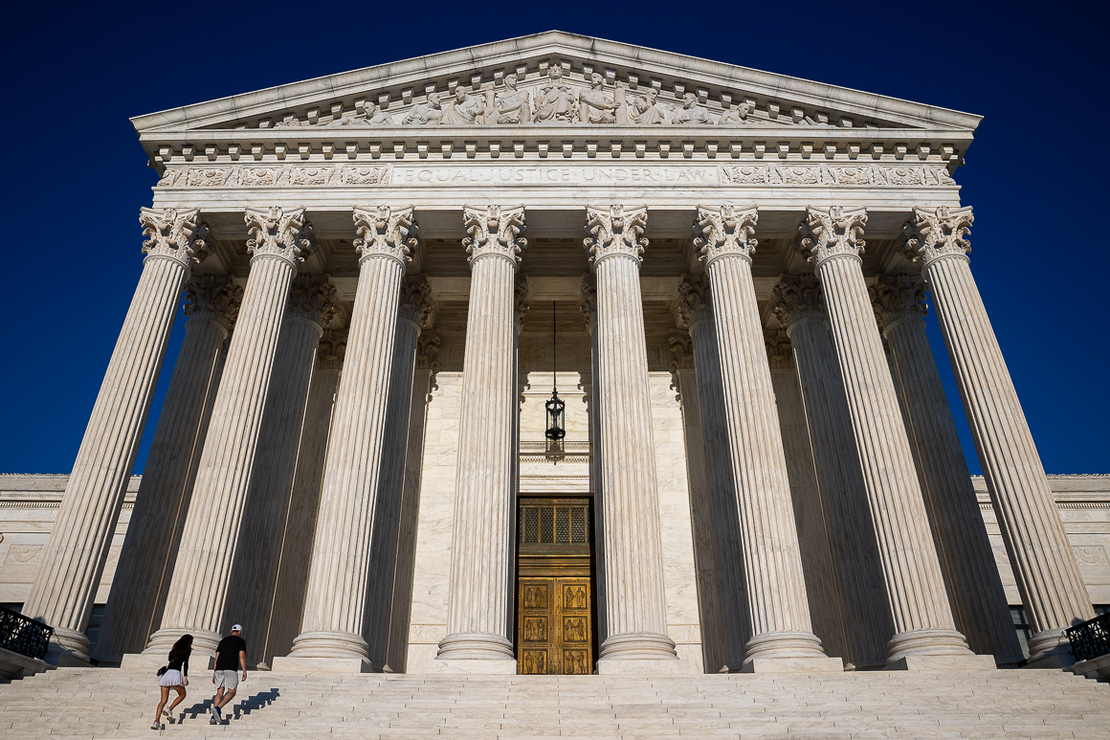 Supreme Court justices yesterday grappled with whether they would limit EPA’s carbon rule to technical improvements to individual power plants — even if those changes trigger soaring costs for industry.

The high court heard oral argument yesterday in West Virginia v. EPA, a landmark case in which red states and coal companies are calling for a narrow interpretation of the agency’s authority to slash carbon dioxide under the Clean Air Act.

Depending on how the justices decide the case, the ruling could not only restrict EPA’s options for addressing climate change going forward, but it could also limit agency powers that extend well beyond emissions regulations. Red state and coal industry challengers had asked the court to find that EPA’s past rulemaking violated the major questions doctrine, which says that courts can’t defer to agency discretion to interpret the law on issues of significant economic or political impact.

It was unclear yesterday whether a majority of the justices would get behind that argument (Greenwire, Feb. 28).

“If they articulate what they think [the doctrine] means … it gives people who want to challenge agency regulations a ton of ammunition,” said Kirti Datla, Earthjustice’s director of strategic legal advocacy.

Some justices signaled discomfort with reaching a ruling that could bar the power sector from using widely used regulatory approaches such as shifting power generation from fossil fuels to renewable sources or adopting an emissions averaging scheme.

Instead, EPA could be limited to regulations that may allow such approaches but couldn’t mandate them as standard of performance, said Yaakov Roth, a partner at the firm Jones Day, who presented arguments for the coal company challengers, Westmoreland Mining Holdings LLC and North American Coal Corp.

“Given the way the grid works, this distinction between incidental and not incidental does not strike me as very convincing,” said Justice Elena Kagan, who is part of the court’s liberal wing.

“EPA doesn’t have to say we are doing this for the purpose of requiring you to change your generation, energy generation mix. But, by regulating the facility, it can cause you to do that yourself. So what’s the difference?” he asked.

The court’s three liberal justices repeatedly questioned the implications for industry of a more limited EPA carbon rule and asked for clarification on how the court was supposed to test whether an agency had overstepped the authority delegated to it by Congress.

Red states led by West Virginia and North Dakota, along with coal companies, argued that the U.S. Court of Appeals for the District of Columbia improperly ruled last year that EPA had broad authority to regulate power plants under the Clean Air Act. The court struck down the Trump administration’s replacement of the 2015 Clean Power Plan with the much narrower Affordable Clean Energy rule in 2019.

Although the Biden administration has said it plans to draft a brand-new power plant rule, the justices yesterday appeared unlikely to find that the West Virginia case had arrived at the Supreme Court too early.

Regulating ‘inside the fence’?

Red states and coal companies have pushed for EPA to be limited to technological fixes that could be applied at individual power plants, an approach the agency adopted in the Trump rule.

But regulations on a specific power plant, known as “inside the fence line” could drive the entire coal industry out of business tomorrow,” said Kagan.

Meanwhile, she said, a broader rule that is “outside-the-fence” could be either small or large too.

“So the rule that emerges from this statute … bears no necessary relationship to whether a rule is major in your sense of expensive, costly, destructive to the coal industry,” Kagan said. “It just bears no relationship to that at all.”

“Those are constraints that make sense for a source-specific requirement,” See said. “They don’t make sense when EPA is regulated on a gridwide or nationwide level.”

Justice Sonia Sotomayor also noted that under the Clean Air Act as a whole, certain provisions are very clear about when industry should install the best available control technology at an existing source.

In the section of the law at issue in this case — Section 111 — “we have something much broader and very different words that say the best system and doesn’t use at the source,” Sotomayor said. “So how do I give meaning to those two different words?” she asked.

See, the West Virginia solicitor general, argued that the D.C. Circuit’s interpretation of the law “doesn’t give EPA any place where it has to stop” regulating emissions.

“The fact that it puts self-imposed handcuffs on the Clean Power Plan does not mean it would need to do that in the next rule,” See said.

EPA’s goal in the Obama-era Clean Power Plan had been to “squeeze coal and natural gas out of the electric supply system,” Lewis said.

“That may be good for the planet … but you can’t make the legal judgment that this is what Congress intended for you to do,” he said.

Attorneys for the Biden administration and large, investor-owned utilities countered yesterday that the Clean Air Act places a number of limits on EPA.

The agency has to show its approach has been “adequately demonstrated,” said Solicitor General Elizabeth Prelogar. For example, she said, “It can’t threaten reliability of the electricity grid.”

Prelogar also shot down the possibility that EPA’s regulation could one day extend to single family homes and require installation of solar panels.

The agency has not listed homes as a source category, Prelogar told Justice Samuel Alito. Even if it had, she added, “that just shows the problem with their interpretation because that is a quintessential inside-the-fence-line measure.”

EPA’s approach isn’t to create a “command and control rule,” said Covington & Burling partner Beth Brinkmann, but it allows tools like emissions trading, which enable emissions reductions that couldn’t otherwise be achieved by applying fixes at the source.

She used the example of an older power plant buying credits from a new plant that is able to more cheaply improve its efficiency. That approach allows the older plant to “live out its life” instead of being forced to close more quickly by the high cost of applying the new emissions technology, she said.

Brinkmann, who appeared on behalf of companies that would be subject to the carbon rule’s requirements, “essentially set up the argument that what could have the most disruptive effect on the energy sector is not the regulation but the actual decision by the Supreme Court,” said Kevin Minoli a longtime former EPA official and now partner at the firm Alston & Bird.

The court’s three liberal justices also appeared to be warning their colleagues against applying the major questions doctrine in this case, said Minoli. Each asked multiple questions about how the doctrine would be applied and how to recognize a major question when it appeared, he said.

“I think it was an attempt to give the other justices on the court some pause before adopting that doctrine more broadly than it has in the past,” Minoli said.

Chief Justice John Roberts yesterday floated a “very aggressive” approach to applying the major questions doctrine by assuming at the outset while reading the statute that the agency doesn’t have authority, said Earthjustice’s Datla.

But Prelogar read Supreme Court precedent differently, saying the doctrine should be used as a tool of last resort.

“You read the statute, and try to figure out what it means and if you’re still confused at the end then maybe you apply the major questions doctrine. I think those two different takes on it are meaningful,” Datla said.

She added that a string of questions from Thomas at the start of the arguments about whether the doctrine is needed to decide the case could signal that he is leaning toward reaching a decision based instead on interpretation of the Clean Air Act.

Justice Brett Kavanaugh, who had heard oral arguments over the Clean Power Plan in 2016 and appeared skeptical of the rule of the time, noted that the power companies support for cap-and-trade systems of emissions reductions presented “solid arguments” for the court to consider.

“[I]t’s not clear to us that he would necessarily find that the EPA lacks authority to issue a more limited rule than the CPP given that generation shifting and emissions trading are routine in the power sector,” said ClearView Energy Partners in a note to clients yesterday.

While this case has been framed as a conflict between the environment and the power sector, it is in fact regulated entities that are coming out in support of EPA, said Max Sarinsky, senior attorney at the New York University Institute for Policy Integrity.

“I thought that was really interesting and speaks to the confusion of ‘outside versus inside the fence line,'” Sarinsky said. “It may be hard to opine on the legality of that distinction in the abstract without a particular regulation in place.”

Some industry observers anticipated the court would take action to limit EPA’s power.

“The oral argument presented today was clear that the Supreme Court should preserve the states’ authority to set emission standards at power plants,” said Jim Matheson, the CEO of the National Rural Electric Cooperative Association.

“Federal agencies are not free to rewrite statutory terms to accommodate policy desires that lack clear congressional directive,” Matheson continued in a statement.

The justices are expected to reach a ruling in the case by early summer.