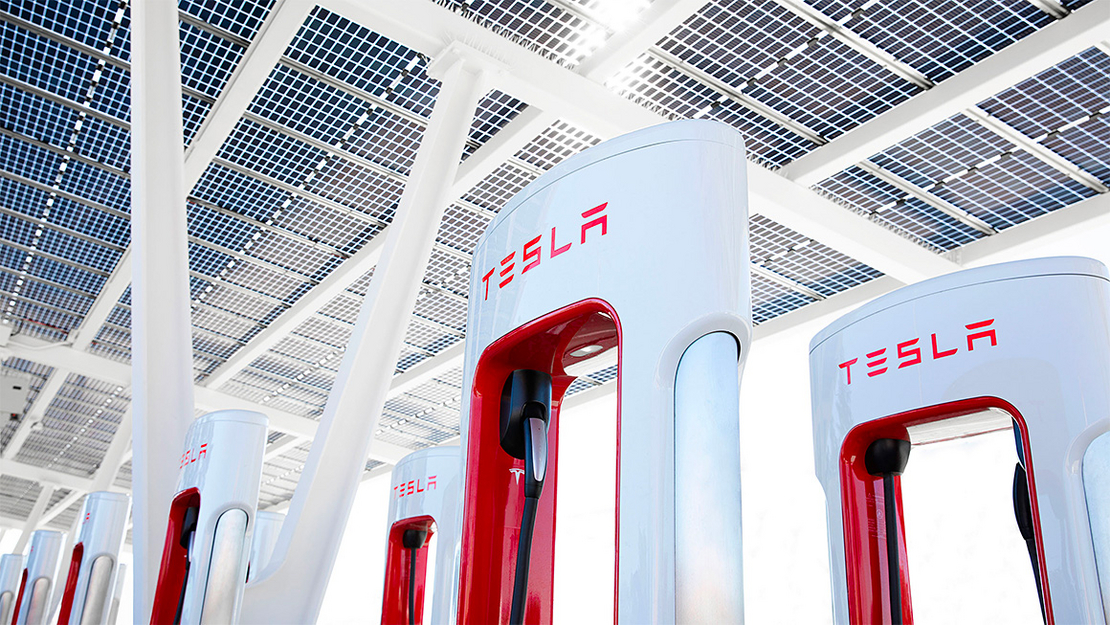 Tesla Inc.'s charging network, one of its most valuable assets to drivers, could open itself to other types of cars under a proposal to the Biden administration. Tesla Inc.

Tesla Inc. is known not just for its electric cars, but the system it has built to fuel them: a coast-to-coast network of fast-charging plazas that only Tesla drivers can use.

Now, as the federal government prepares to spend billions of dollars to build out a public charging network, Tesla has proposed a way to get its hands on some of that money — by partially opening its Supercharger network for use by other electric cars.

Observers say that if Tesla actually did such a thing, it would be a tricky trade-off for the car company but a boon to the Biden administration’s effort to ease the threat of climate change by removing gasoline-powered vehicles from the nation’s roads.

“I think it has the potential to be a pretty big deal,” said Chris Harto, a policy analyst at Consumer Reports. “Under the radar, [Tesla’s] best competitive advantage is their network and exclusive access to their network.”

Tesla’s proposal is contained in comments made this month to the Federal Highway Administration, which sought input on how to spend the $7.5 billion that Congress approved as part of the bipartisan infrastructure bill to construct an EV-charging network.

Tesla CEO Elon Musk has long suggested the possibility of letting non-Teslas use the network. “We always said that this is not intended to be a walled garden,” he said on a company earnings call in 2018.

The company is gradually opening its Supercharger network in Europe and just last week invited all sorts of EVs to its stations in Norway. The comments are the first concrete suggestion of what Tesla has in mind in the United States.

In essence, Tesla suggests that it get federal funding for each public charging stall it creates. But there’s a catch: It also wants a batch of federal money for a corresponding stall for use only by Teslas.

“They’re trying to have it both ways,” said John Gartner, a senior director at the Center for Sustainable Energy, a nonprofit advisory group.

To understand the proposal, it helps to understand how highway EV-charging systems evolved in North America and how Tesla became a network that the Biden administration would want to use.

A decade ago, Tesla did two momentous things: It introduced its flagship Model S sedan, which was the first electric car to catch the world’s attention, and it began building its Supercharger network.

These were the EV equivalent of gas stations, populated by what are called direct-current fast chargers. These cords deliver far more power than the one a driver would have in their garage and are meant for long-distance travel and other trips that involve brief stops. In keeping with the brand’s luxury image, the Supercharger network would be exclusive to Teslas, porting to the car via a slender plug.

At the time, the only other fast-charging system on American roads was called CHAdeMo. Originating in Japan, CHAdeMo has a chunkier plug and mostly served the Nissan Leaf and a few other Asian electric models.

Over the course of the decade, a third standard arrived from Europe. Called the Combined Charging System, or CCS, it evolved to become the system of choice for all automakers but Tesla and Nissan.

CCS is now the de facto standard for anything not called Tesla. Nissan abandoned CHAdeMo with its new electric SUV, the Ariya, which uses CCS. The Biden administration effectively cut off a path for CHAdeMo this month when it said it would only fund charging stations built with CCS.

But the government’s and other automakers’ embrace of CCS masks how dominant Tesla’s network has become.

The Supercharger network has grown from seven plazas a decade ago to 1,278, or more than 21 percent of all fast-charging stops in the country, according to Department of Energy data. But even that understates Tesla’s footprint.

Tesla operates almost 13,000 stalls, or 58 percent of all the available fast-charging plugs in America. Furthermore, Supercharger stations generally sit at the most choice locations — a legacy of the company being first to build. Rows of distinctive, red-and-white pedestals wait for drivers along major freeways, at crucial intermediate spots between major cities and on the way to tourist destinations.

They also are the most functional around. Tesla drivers generally are able to plug in to Superchargers, get the electrons they need and drive off. Not so for users of other networks, who persistently encounter broken chargers and problems with payment (Energywire, Jan. 4, 2021).

Finally, Tesla’s charging plazas are much larger than its rivals. While a non-Tesla charging plaza often has two to six stalls, Tesla’s stops on average have 10, and sometimes more than 40. Large stations mean more fueling can happen.

All those outlets mean there may be some room for non-Tesla vehicles at Supercharger stations, although the company has said that even its biggest stations are sometimes clogged.

Large, serviceable and in the right places, Tesla’s fueling stations are “far more comprehensive than anyone has out there,” Harto said.

Observers say that access to Tesla’s charger web network could help lower a couple of barriers that face federal and state officials who want government money to serve as many cars as possible, as soon as possible.

Building a fast-charging plaza from scratch can cost millions of dollars and take 18 months or more to build. Planners must negotiate for a location, traverse a thicket of permits and sometimes get new grid infrastructure installed to supply enough juice.

“Tesla opening up their network to all other users would be a game-changer in terms of infrastructure availability for all EVs,” Harto said.

The prospect of cooperation between Tesla and the Biden administration is complicated by their clashing agendas over union labor and a host of regulatory issues. Musk has railed against the president, going so far as to call him a “sock puppet” on Twitter, while Biden maintained a strict silence on the topic of America’s top EV maker until just a few weeks ago (Energywire, Dec. 3, 2021).

Supercharger plazas, by virtue of their prime locations, are also easy for drivers to spot. Having drivers know where charging stations are, EV advocates say, goes a long way toward resolving drivers’ range anxiety so they feel comfortable buying an electric car in the first place.

“The fact that Tesla has the highest market share among [original equipment manufacturers] and that their charging network is among the most visible, that will do a lot to alleviate those concerns,” Gartner said.

For its first round of funding, the Biden administration wants to fill in the gaps along major traffic routes (Energywire, Feb. 10). Many of these “alternative fuel corridors,” as the government calls them, are already populated by Supercharger stations.

But part of Tesla’s proposal could give the Biden administration pause.

The first arm of the proposal is straightforward: Tesla should get funding for each connector with the new common standard — CCS — that it installs. But it goes on to ask for something else.

In essence, Tesla suggests that for every CCS connector it installs, it also get a “rebate” for a Tesla-only connector it already has onsite.

That plan presents a couple of challenges for the Biden administration. One, Congress designated the money only for chargers that everyone can use; two, it intended new infrastructure, not steel that is already in the ground.

It is unclear how Tesla’s recommendation will fare. The government’s guidelines are being developed by a new joint office of the Transportation and Energy departments and are due in May.

Even if Uncle Sam worked out a deal for all EVs to drive into Supercharger stations, the prospect is a tricky one for Tesla.

On one hand, exclusive access to the Supercharger network is part of the pact that Tesla has long made with its customers. How Tesla drivers would react to seeing Chevy Bolts or Ford F-150 Lightnings parking at their plazas is unknown.

On the other, Tesla could make a lot of money off all those new drivers making payments for electric fuel.

“Right now they’re trying to balance what the value is of keeping our network closed, because that gives us an advantage in selling vehicles,” Harto said, “as opposed to opening up to other drivers, which would increase the utility of those resources they’ve already invested in.”

Those hard choices suggest that perhaps even Tesla hasn’t figured out how to proceed.