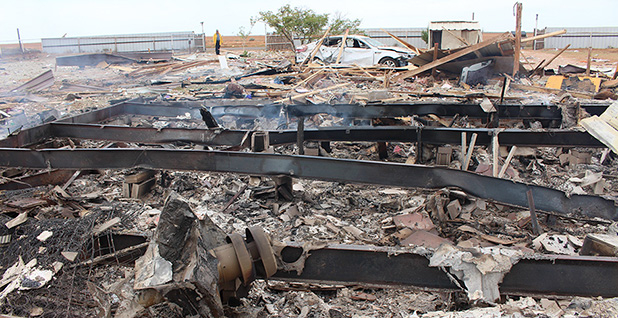 The Texas Railroad Commission replaced the specific rules with a vaguer requirement to operate the lines in a "reasonably prudent manner."

"The priority is to protect the bottom line of the pipeline industry and not the health and well-being of the residents of Texas," Weimer said.

The change was hailed by pipeline operators and others in the oil and gas industry who say rural gathering lines aren’t risky enough to justify costly rules.

"This regulation is very cost-prohibitive," Kelly Roberts, director of health, safety and environment at EnerVest Operating LLC, said in comments to the agency about the stricter staff proposal. EnerVest has 3,745 miles of pipelines in Texas, and only 126 miles of those are currently regulated. Roberts called the staff proposal "a financial burden to all operators."

In other comments, trade associations and companies told Texas officials that the stricter rules should apply only to larger gathering lines or that they should wait on federal gathering rules being developed by the Pipeline and Hazardous Materials Safety Administration.

Representatives of the three elected commissioners — Chairman Wayne Christian, Christi Craddick and Ryan Sitton — didn’t respond to a request for comment on their proposal, which is scheduled to be published Oct. 18.

The Railroad Commission rules would cover only Texas. But the Lone Star State accounts for a huge share of the country’s gathering lines.

Gathering lines are commonly small pipelines carrying oil and gas from wells to processing sites. But the industry has been building large, high-pressure gas pipelines that legally qualify as gathering lines. So in rural areas, they’re not regulated despite their size.

Smaller lines can also be dangerous. Last summer, there were three fatal gathering line accidents in the Permian Basin region of Texas in a two-week period. One explosion killed a 3-year-old girl and left her family members badly burned.

The Railroad Commission staff proposal, released in July, included a suite of requirements for the lines. Smaller gathering lines would have to be marked and surveyed for leaks. The companies that own them would have to alert people living nearby, set maximum pressure and check regularly for corrosion (Energywire, July 19).

Lines larger than 12 inches in diameter would have been regulated the same way as long-haul transmission lines.

The commission staff version went much further than federal proposals under consideration by PHMSA. One of those would set safety requirements on lines wider than 8 inches, and another only on lines wider than 12.75 inches, while the Texas staff had set no minimum diameter threshold.

The proposal approved by the commissioners would, like the staff proposal, require gathering line operators to report accidents and cooperate with the agency’s investigations. Operators currently don’t have to do either when incidents occur in rural areas.

A spokeswoman for the agency declined to say why the proposal was changed but noted that the public can comment on the rules until Nov. 18.