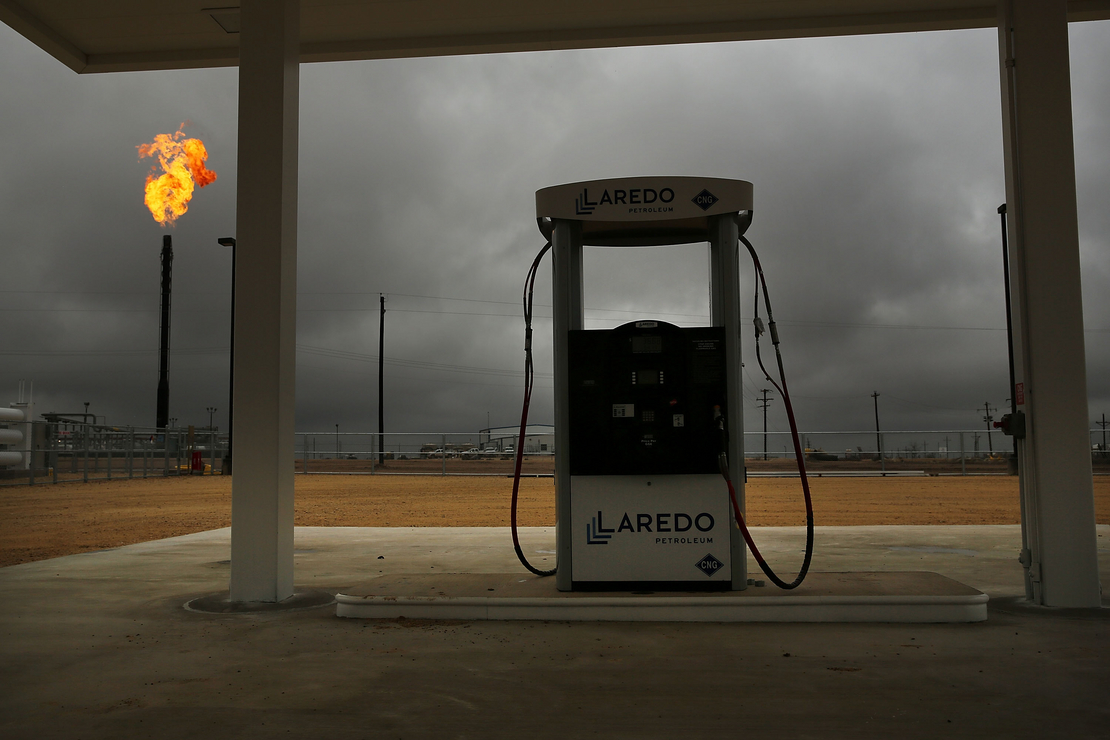 Flared natural gas is burned off at a facility in the Permian Basin in Garden City, Texas. Spencer Platt/Getty Images

As the U.S. government prepares to usher in an avalanche of renewable energy investments, Texas officials are signaling they’d like to head in a different direction.

Lt. Gov. Dan Patrick (R) and state lawmakers are pitching a plan to mandate new natural gas generation to avoid future power crises in Texas. Patrick — who presides over the state Senate — suggested economic incentives for gas-fueled plants at the expense of wind and solar, similar to an unsuccessful bill he backed last year.

“We can’t leave here next spring unless we have a plan for more natural gas power,” Patrick told reporters recently.

At the same time, leaders of the state Public Utility Commission (PUC) and the Electric Reliability Council of Texas (ERCOT) are pitching a separate plan to overhaul the grid after Winter Storm Uri. The storm in February 2021 led to over 240 deaths in Texas amid dayslong blackouts.

Although Texas’ primary market design is unique in the U.S., challenges with reliability amid a wave of renewables are not. That means the state’s discussion of grid changes could be closely watched by other regions, especially as the Inflation Reduction Act and other federal measures are offering up new incentives to help decarbonize the grid.

The PUC proposal — a complex, novel structure known as the performance credit mechanism — would favor thermal plants fueled by natural gas, coal and nuclear energy that can be turned on and off. The idea is to help the state move away from what critics call an overreliance on wind and solar.

“We need to meet demand on the days when renewable sources come in below forecast,” said ERCOT CEO Pablo Vegas during a state House hearing this month. “The fact is that firm demand is growing at a pace that is surpassing dispatchable generation. If there’s a low renewable performance, we could be in a situation where we cannot meet the needs of our customers.”

In the aftermath of Uri, state lawmakers mandated a report on the region managed by ERCOT, covering about 90 percent of Texas’ power demand. The study was meant to offer ways to fix the existing market structure that relies on supply and demand and tends to operate with a narrow reserve margin on hot and cold days, leaving little room for error when power sources go offline as they did in 2021.

The November report from consulting firm E3 pitched several solutions, but PUC Chair Peter Lake has put his weight behind a performance credit mechanism (PCM) model. It would require power providers to purchase credits from power generators that essentially guarantee that both will have sufficient power to meet the hours with the highest demand on the grid. Providers that don’t have sufficient credits or generators that fall short of demand would face financial penalties.

Lake said there could be price “volatility” as power generators invest in those dispatchable resources, but he also said electricity costs to customers could drop as more power plants come online.

Lake has advocated the PCM as a way to ensure reliability during peak hours without creating conditions that led to skyrocketing natural gas and power prices during the 2021 winter storm. Speaking to members of the Texas Senate in November, Lake said his goal was to set up a model that “does not interfere” with the current market structure but “guarantees we have reliable power in the long term” as the state’s economy grows.

Existing risks were on full display this summer, Lake added, as extended heat waves pushed ERCOT demand to record levels. While the lights stayed on, Lake said there was danger of power outages on several occasions. A recent ERCOT report said the grid faces blackout risks from an extreme winter storm.

Others aren’t so sure that the PCM model would address those problems. In the November Senate hearing, state Sen. Donna Campbell (R) said it was “a setup for failure for everybody.” In an interview, former PUC adviser and current energy consultant Alison Silverstein said the plan was “particularly murky” and wouldn’t have addressed the failures during Uri.

A letter from nine Texas senators this month urged the PUC to pump the brakes on the reform measure, citing “significant concern” that the PCM proposal would not adhere to the standards dictated by the Legislature’s grid reform bills.

“It is not in the best interest of our constituents to support any proposal that further delays investments in new dispatchable generation, and the Commission should carefully consider the unintended consequences of any type of proposal that creates more uncertainty for market participants,” the letter said.

The backdrop for the reform discussions is urgent.

ERCOT itself issued a winter forecast that found that an extreme storm similar to Uri could stretch demand and lead to rolling blackouts, although the grid operator forecast that the lights would stay on in most winter weather (Energywire, Nov. 30).

While Lake and Vegas have been optimistic about keeping the lights on this winter — in large part because of reforms requiring gas plants and distributors to better prepare their equipment for the cold — Lake suggested there’s looming danger when speaking to state lawmakers last week. “Every day we delay, we’re one day closer to the next grid problem,” he said.

But the urgency must be balanced against rising electricity bills. According to the U.S. Energy Information Administration, prices across all sectors in Texas rose from 9 cents per kilowatt-hour in August 2021 to more than 11 cents per kWh a year later. A recent LendingTree survey found that 45 percent of Texas families have had to cut spending on food or medicine to pay rising electricity bills, the most of any state.

That has some observers worried that a new market design could be a dicey proposition.

“We can’t just adopt the idea of better reliability at any price,” said Silverstein. “We can’t have another Uri, but we also have to be really thoughtful about where we draw the line and … the most effective way to get reliability improvements for every dollar we pay.”

There is no real-world model for PCM, although it bears similarities to capacity markets used in other parts of the country as well as futures markets. The E3 authors did not recommend it as the best of the options they explored, saying in their report that there is “significant risk” with a new design.

“It’s untested, this is some creation out of whole cloth. We don’t know if it will work in the real world,” said Ed Hirs, an energy fellow at the University of Houston. “What the consultants have laid out are the positive comparisons to a capacity market but they fail to point out that the so-called capacity markets don’t accomplish the end goal, which is a reliable grid.”

For example, he said, a key market in the Midwest still faces reliability challenges. NERC’s winter forecast found that the Midcontinent Independent System Operator could see a 7 percent shortfall of power in a winter storm.

Lake has defended the novelty of the PCM concept as an asset, especially in ERCOT’s unusual market.

“You can buy a Ford F-150 anywhere in the country,” he said at the recent House hearing. “If you want the King Ranch F-150, it has to come from Texas,” he added, referring to the rugged pickup truck model named after a Texas cattle ranch.

Joshua Rhodes, a research scientist at the University of Texas, Austin, said unknowns make it hard to model the potential cost impacts of a new market design. The effects especially depend on how the market treats renewables. A design that discourages generators from building new wind and solar as prices drop could lead to long-term cost increases relative to other markets, Rhodes said.

The E3 report estimates that the average residential electricity consumer could see increased costs of about 2-3 percent by 2026 — the only year modeled in the report — for a tenfold improvement in reliability. That’s less than what consumers might pay with no market changes, although the ultimate price depends on factors like natural gas prices and the growth in renewables.

The Texas Association of Manufacturers, however, came out against the PCM plan as proposed over the potential costs. Katie Coleman, a lawyer representing the industry group, said at the House hearing this month that a midsize factory could end up paying millions more for electricity based on E3’s estimates.

“We are concerned about a scenario where we are paying very high costs and not getting additional reliability,” Coleman said.

And Campbell, the state senator who sits on the committee that oversees the PUC and ERCOT, said any increases would end up hurting households. “The end loser is the end user,” she said last month.

What role for renewables?

The PCM model also seems to favor thermal power plants at a time when other incentives are pushing energy developers to invest in wind and solar.

Texas has seen a boom in solar and wind installation, which at times this summer accounted for about a third of all generation on the ERCOT grid.

But those sources have long been the target of Texas Republicans’ ire. Since they are intermittent and don’t produce energy when the wind doesn’t blow or the sun doesn’t shine, Gov. Greg Abbott (R) and other Republicans pinned the blame for the 2021 winter outages in part on clean energy (Energywire, Nov. 30, 2021).

Reports after the fact showed that all sources, especially natural gas, performed below capacity during the storm.

But with reliability the key factor, any new market design is unlikely to promote renewables. In fact, Lake and Vegas have used their public appearances to make the case that the PCM is a balm for the growth in renewables. Abbott — who was recently reelected — appointed Lake and other current PUC members.

The PCM design would incentivize coal, gas and nuclear plants to stay online and participate in the grid, even as the low cost of clean energy has driven many of them out of the market. The E3 report forecasts another 5.6 gigawatts of natural gas capacity coming online under the design, enough to power 1.1 million homes during peak demand based on ERCOT calculations.

In House testimony, Michele Richmond, executive director of the Texas Competitive Power Advocates, said there is more than 4 GW of new gas plants in the ERCOT interconnection pipeline that could be put into service under the PCM model.

Renewable energy advocates, however, said the new design could disrupt what has been a booming market.

“The E3 report’s PCM recommendation will reduce revenue in the energy market and implement a capacity like mechanism that benefits some types of generation without guaranteeing any new generation is built,” Tonya Miller, executive director of the Texas Solar Power Association, said in a statement to E&E News. “TSPA would like to see as little disruption in the ERCOT energy market as possible to provide for continued investment in Texas and low cost power for consumers.”

“I’m not saying we’re going to grow into the future with just efficiency,” Menendez said, “but we’re breaking our heads over this market model when there’s more we can do immediately.”

The PUC is accepting comments on grid reform proposals through Thursday and will continue the discussion before reaching a decision. A final vote could come during a January PUC meeting.

Rhodes said he expects to see changes given the cool reaction from the Senate and other stakeholders, but the complexity of the Texas grid could continue to pose a challenge.

“This is not a place where the commission wants to be when they’ve got a mandate to fix things,” Rhodes said. “It almost feels like no one’s happy. But I don’t know that we’re any less happy than we were a year ago.”