‘The job is not done.’ What the climate deal means for CO2 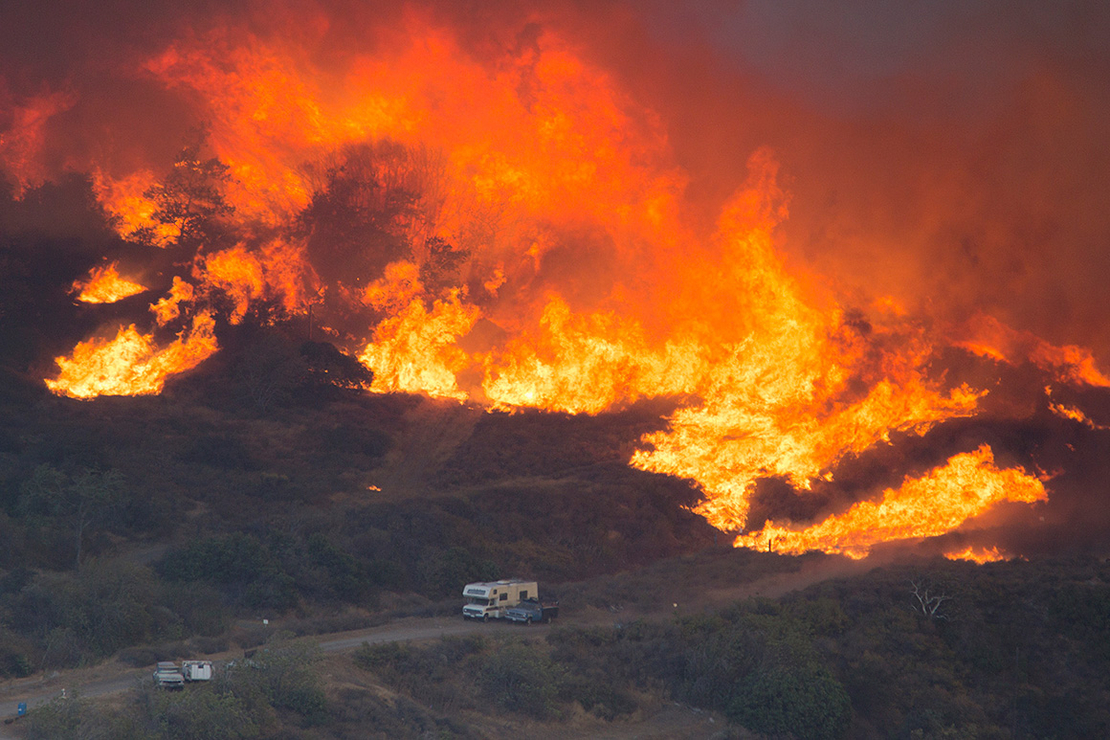 Flames are pictured closing in on vehicles near Wrightwood, Calif., as the Blue Cut Fire blazed in 2016. David McNew/Getty Images

In 2010, former President Obama pulled the plug on a cap-and-trade proposal to push through other parts of his domestic agenda. A decade passed before Congress tackled climate policy again.

When it did, President Biden chose the opposite path of his former boss.

The reconciliation package announced by Biden yesterday calls for $555 billion in climate and clean energy spending, making it the largest climate investment in American history and the biggest section of the $1.75 trillion budget deal.

That fact underscores the growing importance of climate politics to Democrats and highlights the lessons learned by the party’s policymakers over the last decade. Out are programs that would impose costs on polluters like cap and trade and carbon taxes. In are investments in clean energy, which are popular with voters and have helped transform America’s electricity sector.

The $90 billion in clean energy spending contained in the 2009 stimulus package helped send the cost of renewables plummeting and the number of wind and solar installations soaring. Now, Democrats are applying that approach to everything from electric vehicles to green hydrogen to sustainable aviation fuel (Climatewire, Oct. 26).

“I think this is a historic turn of the ship of nation,” said Josh Freed, who leads the climate and energy program at Third Way, a center-left think tank.

The deal not only marks a sea change from the climate denial of former President Trump, but also expands the traditional scope of clean energy subsidies beyond their deployment in the electricity sector.

“We’re struck by the investment in industrial decarbonization, clean manufacturing, the other components of the modern economy that need to get to net zero that have too often been pushed aside because they are so difficult,” Freed said.

But if the reconciliation package underscores the new frontiers of U.S. climate policy, it also illustrates its limitations. A plan to pay utilities to add clean electricity was scrapped, in part due to opposition to a penalty for power companies that did not clean up fast enough.

The status of a proposed fee on methane pollution was not clear until the House Rules Committee released a draft bill containing the provision Tuesday afternoon. Whether it sticks is one of the top questions facing Democrats in their final round of negotiations.

“A real challenge for the U.S. is if a carbon price is just so challenging politically, regulatory tools can only take place through the Clean Air Act, which is a very brittle process,” said Barry Rabe, a professor who studies climate policy at the University of Michigan. “Then you’re left with investment. Can you produce enough money for a sustained period of time to bridge all those uncertainties?”

Biden is betting it can.

The president has committed to cutting U.S. greenhouse gas emissions 50 to 52 percent from 2005 levels by 2030. America released 5.77 billion tons of emissions in 2019, the most recent year for which EPA data is available, or about 13 percent below 2005 levels. They plunged last year during the pandemic, but are on the rebound in 2021.

Biden said yesterday that the deal would lead to the reduction of more than 1 billion tons of greenhouse gas emissions in 2030, and would drive investments in clean manufacturing and renewables.

“This framework also makes the most significant investment to deal with the climate crisis ever, ever happened — beyond any other advanced nation in the world,” the president said.

Analyses by Energy Innovation, the Rhodium Group and Princeton University of earlier versions of the climate provisions in the reconciliation package found that emissions reductions would amount to about 1 billion tons in 2030.

But those models also show the United States falling short of Biden’s 50 percent pledge. Princeton forecasts an emissions gap of 350 million tons in 2030. Rhodium projects U.S. emissions could fall 45 to 51 percent below 2005 levels in 2030, but relies heavily on the assumption that EPA will also impose stringent pollution standards.

Many analysts said it is unrealistic to think one piece of legislation alone could satisfy Biden’s climate goals. At the same time, it leaves the very real question of how the United States will close the gap.

Executive actions are subject to court challenge and are easily reversed by future presidents. State climate action is largely limited to Democratic states, though there are exceptions like North Carolina. Even congressional spending could be rolled back by future Republican majorities.

“Given that we may see a change of majority next year, all the rulemakings, all the legislation, it is all vulnerable in the long run,” said Michael Mehling, a professor at the Massachusetts Institute of Technology.

The advantage of the clean energy spending approach is that it would drive more deployment of new emissions-cutting technology, he said. That, in turn, would drive a reduction in costs.

“Technological progress you can’t vote out of office,” Mehling said.

A report released by the United Nations this week shows that the world is on track for 2.7 degrees Celsius of warming. If countries fulfill their updated climate pledges, the planet would be on track for 2.2 degrees of warming — or more than the 1.5- to 2-degree target agreed to under the Paris Agreement.

David Lea, a climate scientist at the University of California, Santa Barbara, said U.S. actions are needed even if global temperatures were to exceed 2 degrees of warming.

A recent report by the U.N. Intergovernmental Panel on Climate Change found that every half-degree of additional warming causes discernible increases in climate risks.

“Every step we can take to reduce carbon we put in the atmosphere is a positive step,” Lea said. “It is not like there is a magic number above or below of which the outcomes will be good or bad. The less greenhouse gas we emit into the atmosphere, the lower the climate risk.”

The emerging deal in Congress would be a step toward turning Biden’s climate pledge into a reality, said Taryn Fransen, a climate analyst at the World Resources Institute who contributed to the recent U.N. “Emissions Gap Report.”

Yet climate risks remain. Seemingly slight increases in temperature can have drastic consequences, she noted. Coral reefs, for instance, disappear in a world where temperatures rise 2 degrees.

“That is the story of working on climate change,” Fransen said. “If we get those climate provisions, it is a real win. We shouldn’t undersell it. But the job is not done.”