The myth of the 100-year flood 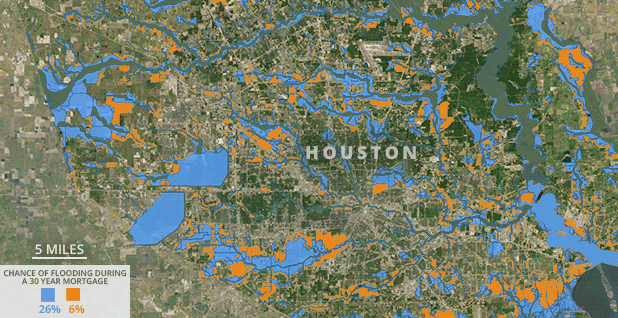 With southeast Texas facing years of recovery after Tropical Storm Harvey’s catastrophic floods, many ask whether the devastation could have been prevented or mitigated.

Experts say yes. They blame how the government assesses and communicates flood risk.

Federal policies are built around the so-called 100-year floodplain, which is commonly and incorrectly understood as an area that would flood once every century. But it really means there’s a 1 percent chance of flooding in any given year or that there’s a 26 percent chance of being flooded at least once during a 30-year mortgage period, according to the Federal Emergency Management Agency.

Moreover, flood maps don’t take into account pavement and development that takes place in wetlands or floodplains. Putting impervious pavement on top of natural sponges will only make flooding worse.

President Trump flubbed the numbers with a tweet describing Harvey as a "once in 500 year flood." But homes in a 500-year floodplain really have a 6 percent chance of flooding over a 30-year mortgage.

"You have a 1 in 6 chance of rolling a dice and landing on four, but you can still land on four twice in a row," said Stephen Strader, a professor of geography and the environment at Villanova University. "The same goes for a 100-year flood or a 500-year flood."

"The biggest problem with flood maps in the U.S. is that they are drawn as ‘lines in the sand’ — at risk of flooding on one side, and A-OK on the other side," said Nicholas Pinter, director of the University of California, Davis’ Center for Watershed Sciences.

"This a false and dangerous message to send," he said.

In Harris County, Texas, where Houston is located, that means just 12 percent of the 1.6 million properties are required to have flood insurance.

Property owners in the 100-year floodplain are also eligible for funding to help them mitigate flood risk by putting their homes on pilings or fill. Local governments generally concentrate their building and planning standards around the 100-year floodplain, creating extra requirements for elevating homes in those areas.

While mandatory insurance purchasing requirements haven’t stopped development within the 100-year floodplain, studies have shown that they have significantly increased development in areas immediately outside those areas, where buildings can still have shoreline views without adhering to strict building codes.

But those edge locations can be just as vulnerable as properties built within the 100-year floodplain.

A study of flood insurance claims in Houston between 1999 and 2009 found 55 percent were from beyond the 100-year floodplain boundary, with an average distance of just under 1,400 feet.

Damage beyond the 100-year floodplain can still be significant. Another study of Houston in the 1999-2009 time frame found every meter away from the floodplain translated into just a $18 decrease in flood damage. During Tropical Storm Allison in 2001, that meant living 0.2 mile outside the 100-year floodplain only reduced the average repair bill by $7,365 but still caused $24,331 worth of damage, the study found.

Sandra Knight, former deputy associate administrator for mitigation at FEMA, points out that there really isn’t a good risk-based reason to put so much policy weight on the 100-year floodplain.

"We have basically taken a condition for insurance, which is based on probability, and set it up as a de facto standard for floodplain management, all because of the flood insurance program," said Knight, who is now a senior research engineer at the University of Maryland. "But it doesn’t reflect the risk, it reflects the probability."

Another issue: FEMA flood maps intended to show where 100- and 500-year floodplains are located rely on data from historic floods to predict what area would be affected by a new 100-year event.

Critics of the National Flood Insurance Program have long complained that the maps are not updated often enough. And when the maps are revised, they say, statistical models used to create the maps don’t consider changes in land use, which can significantly affect flood risks as pavement replaces grass and trees.

"Imagine pouring water on a sponge versus pouring it on a table top," Strader said.

Similarly, flood maps also don’t consider the efficiency of a community’s stormwater drainage system, or other factors that could worsen inland flooding.

That’s particularly problematic in storms like Harvey whose main hazard is rain, not wind. Such storms are more likely to cause damage outside the 100-year floodplain when paved areas drain poorly.

Such storms are only likely to become more common because of climate change, scientists say, as warmer oceans increase precipitation in storm systems.

Because FEMA uses historic data to calculate flood maps, they don’t take into account the probability that future storms could bring more rain.

"We have a changing climate, and we’re using a statistical model for our maps that doesn’t provide any more statistical weight to near-term changes in the environment," Knight said.

Pinter is quick to caution that the U.S. is much better prepared thanks to the 100-year flood standard and the maps that come with it than it would be without any standard at all.

But, he said, Harvey shows how policy flaws can exacerbate problems caused by severe storms.

"Every flood disaster is like a prizefight — it takes two participants in the ring," he said. "A big flood starts with a momentous meteorological event, but only happens if that event collides into infrastructure built without enough protection or caution."

Strader agreed. While he acknowledged "no city could withstand 30-plus inches of rain in 72 hours … urban sprawl and increased development has only exacerbated the situation."

Increased investment in FEMA’s flood mapping program and changes to statistical models used in mapping would be a good first step to improving the nation’s flood preparedness, experts agree.

Both Pinter and Strader expressed concern that the Trump administration would consider planning for climate change in flood mitigation given that Trump revoked an Obama-era executive order this month that would have required federal-funded infrastructure being built in floodplains to account for higher sea-level rise and more intense storms (Climatewire, Aug. 16).

Others have suggested setting a flood standard for larger storms — a 1,000-year flood, for example, or basing flood policy on a gradient rather than a specific flood probability. Such changes would require major policy overhauls by Congress and the administration. Neither has shown any appetite for changing flood standards.

Bottom line, Knight said, is that improved communication with consumers is critical.

"People always think that it will never happen to them, but if you really explain that your home is in an area where it has a 1 in 4 chance of flooding over a mortgage, hopefully that would hit home," Knight said.

"That’s pretty high odds considering that a mortgage is one of the biggest investments families make," she said.