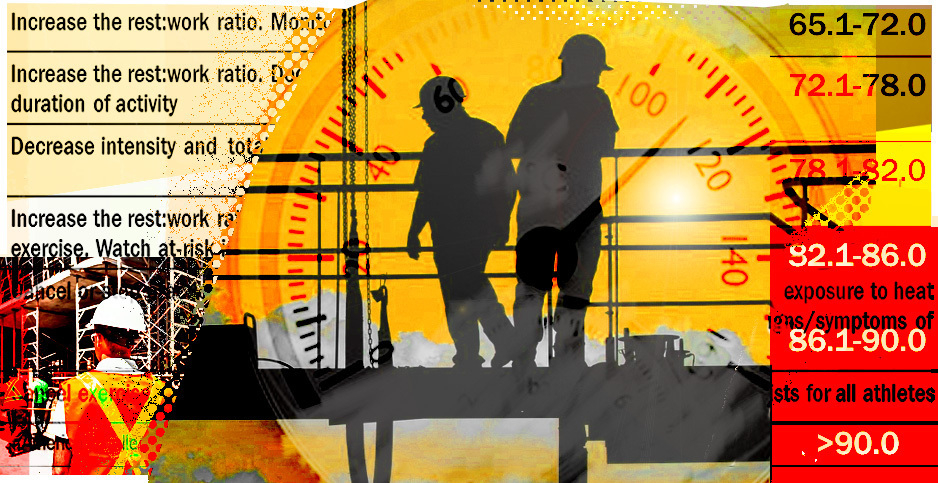 News that temperatures last year once again hit global highs — with 2020 tying for the hottest year on record — underscores challenges facing weather forecasters tasked with educating people about the dangers of heat.

The National Weather Service has been making changes in recent years to make sure people understand when temperatures get too hot to handle.

"There’s always room for improvement," said NWS Severe, Fire, Public and Winter Weather Services Branch Chief Michelle Hawkins. "We want to communicate the tools we have in a way that people understand them and know how to use them."

Heat is the leading weather-related killer in the United States. More than 700 deaths per year result from heat exposure, which can make it difficult for bodies to cool, resulting in dehydration or heatstroke.

But many variables contribute to exactly when heat becomes dangerous. Humidity, lack of wind and direct sunlight, for example, can make temperatures feel even more stifling, and more concrete coverage or lack of green spaces can increase temperatures in urban heat islands by up to 15 degrees Fahrenheit more than other areas.

But in 2013, an NWS internal assessment found that the agency’s weather forecast offices used various methodologies to develop criteria for using heat products, resulting in confusion around the difference between heat warnings and advisories.

That prompted the agency to take a deeper look at how its heat thresholds stood up to real health data.

In 2018, researchers with NWS and the Centers for Disease Control and Prevention found that even moderate heat sends northerners to the hospital — and that hospitalizations peak long before NWS heat advisories and warnings are issued in cooler states in the New England and Midwestern regions.

"There were places where people were going to the hospital for heat illness at temperatures below our warnings," Hawkins said. "It was eye-opening for us."

"I was surprised when I first read that," said Massachusetts General Hospital emergency physician Renee Salas, who was not involved in the study but has advocated for NWS to use more localized data in its heat alerts. "But it tracks with what we see in our emergency department, and it makes sense that people in the South, who are more accustomed to heat, are more educated on how to change their behavior as temperatures rise and more prepared for it."

Since then, weather forecast offices in New England and New York have lowered their heat thresholds, now issuing advisories if the Heat Index is 95 degrees for two consecutive days or reaches 100 degrees for any duration of time.

"After learning about these relationships, we used the methodology to inform our products," Hawkins said.

NWS is also working on a new "heat risk" prototype in its Western Region, modeled on EPA’s Air Quality Index, to show when there is an increased risk of heat-related illness.

"It takes into account how above normal temperatures are for a location, the time of year, the overnight temperature, the difference between the highs and lows, and includes information from the CDC," Hawkins said, adding that NWS is evaluating how to do something similar nationwide.

"We are giving some thought to how we pull all these things together to develop a national and consistent heat program," she said.

Some question whether NWS can ever do enough to communicate risk if it continues to rely on its signature Heat Index, created in the 1970s, which combines only temperature with humidity to show what the weather "feels like."

The metric has limitations because it is based on shady, light-wind conditions, with NWS acknowledging that direct sunlight can increase the "real feel" by up to 15 degrees.

"Most people don’t know or understand the assumptions that go into the Heat Index, and that can be a problem when you’re adding in sunlight or physical activity," said Andrew Grundstein, a professor at the University of Georgia who has helped the state develop heat safety protocols for scholastic athletes.

That’s one reason why the military and sporting groups don’t rely on the Heat Index, but rather use something called the WetBulb Globe Temperature, which also takes wind speed and sun cover into account, along with temperature and humidity.

NWS has encouraged its weather forecast offices to consider whether it makes sense to use the WetBulb Globe Temperature in certain areas, but Hawkins said that because it was designed for use by "active populations such as the athletic community, it may not always be reflective of the risk posed by heat to the general public." The Heat Index, she said, remains an important "foundation."

Grundstein said the Heat Index "probably works fine for an average person," but that outdoor workers and athletes who spend a lot of time in the sun or wearing heavy protective gear should be made aware of the limitations.

"When I finally read the fine print on the Heat Index, I was shocked it didn’t take those things into account," he said.

That’s one reason the private weather service AccuWeather incorporates more than 10 variables into its "RealFeel" temperature, including wind, precipitation, visibility, cloud cover and sun angle, among other things.

AccuWeather founder Joel Myers said it was his "frustration that the Heat Index only used temperature, humidity and wind chill" to communicate what the weather felt like that led him to develop the metric.

"Our RealFeel is more accurate and more useful," he said. "The Heat Index doesn’t take wind into account in the summer. But if you’re standing in Manhattan surrounded by concrete, it’s going to feel very different than if you’re on a beach with 20-mph gusts, even if the temperature and humidity are the same."

AccuWeather pulls from a variety of public data sources — including NWS — to make its RealFeel calculations. It also relies on NWS heat advisories and warnings to send push notifications to users of the AccuWeather smartphone app.

Myers said he believes that having more accurate RealFeel calculations helps people make more educated decisions about how to protect themselves from the heat.

But Fred Campagna, an on-air meteorologist with Atlanta’s CBS affiliate, said critics of NWS underestimate the difficulties of communicating the risks of extreme heat.

That’s partly because even extreme heat can have different health impacts on different people, depending on their living conditions and access to cool spaces in hot temperatures, as well as underlying medical conditions that might make them more vulnerable.

When NWS issues heat watches or advisories, Campagna and his team tell viewers to keep hydrated and stay indoors as much as possible to make sure the public knows it’s "not just a typical summer day."

However, the station rarely explains the details of how the Heat Index might underestimate how hot it feels outside. Campagna said that level of information isn’t relevant to most viewers.

"Once the Heat Index is 105 degrees and high school football practice is getting canceled, it’s kind of irrelevant if it’s really going to feel like 110 degrees on the field — it’s going to be uncomfortable enough, anyway," he said. "The specifics don’t really matter as much to people as just knowing, ‘OK, it’s a heat advisory; I probably shouldn’t go mow my lawn at the hottest time of day.’"