‘The river disappears, but the pollution doesn’t’ 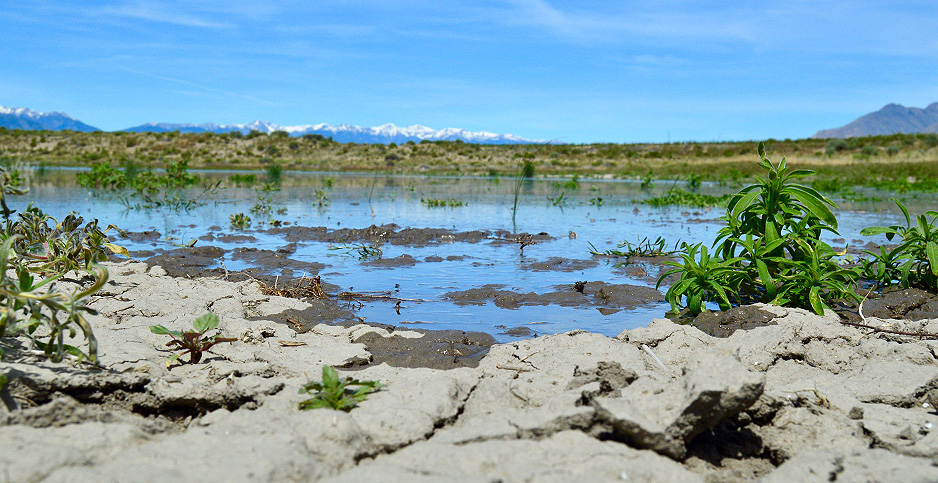 An ancient tributary to the iconic Snake River, the Big Lost was cut off by volcanic eruptions millions of years ago. Lava cooled into porous basalt, now covered by volcanic ash. When the river reaches the aptly named Sinks, it disappears underground.

Water "lost" today will reemerge in 200 years at the other side of the aquifer, 100 miles away, pouring into the Snake River from black canyon walls sprouting bright green vegetation.

This region, sandwiched between Idaho Falls and Craters of the Moon National Monument and Preserve, is home to many geological oddities. But the Big Lost River — and the four other "lost drainages" that disappear into the desert here — have long confounded federal regulators tasked with protecting the nation’s waterways.

"There’s always been an uneasiness about how to handle the parts of the river that sink," said EPA’s Heather Dean, who works on water resources issues in Region 10. "This is where the science and the regulations don’t meet up so well, because the Big Lost is still functioning as a tributary, but, under the law, that isn’t always good enough."

The confusion could soon reach a resolution under the Trump administration’s Waters of the U.S., or WOTUS, rule, which would explicitly eliminate Clean Water Act protections for waters without surface connections downstream.

You’d never know about the Big Lost’s disappearing act by looking at its headwaters. It begins like any normal river, with mountain streams fed by melting snowpack and rain that sustain a genetically unique species of whitefish. The Big Lost River is a popular fishing and boating spot down to the Mackay Reservoir, where a 100-year-old earthen dam retains water for irrigation.

It’s below the reservoir that things get weird.

The geology here resembles a series of bathtubs filled with marbles the river can easily fall through, each named after the closest town. The Big Lost every year disappears somewhere along its path, but exactly where that happens depends on a combination of precipitation and the amount local farmers draw from surface water and groundwater to grow hay and grass.

If there’s not a lot of water, the river might end at the Leslie sinks, just below the reservoir. But if there’s enough water to fill up the bathtubs and keep the river flowing, it may not disappear until the Arco sinks, at the town farthest away from the reservoir. Some years, the river will disappear and reemerge in multiple places.

Whenever the water flows beyond all the towns and into the desert, it’s a "big deal," said Caselle Wood, a project manager for Trout Unlimited, who grew up in Arco.

Two years ago, the Big Lost made it all the way to Box Canyon, a locally known landmark, for the first time in decades. "Everyone and their dog was scrambling through the brush to come take a look" at water finally flowing below the basalt rock formation, Wood recalled.

The groundwater table was high this year, and meltwater from heavy snows last winter provided enough replenishment that last month, the river gushed through places that are often dry, running all the way to the Sinks, its natural desert endpoint on property owned by Idaho National Laboratory.

That’s only happened a couple of times per decade since the 1970s, when irrigation practices in the valley changed. Historically, farmers irrigated by flooding fields, a practice that inadvertently recharged groundwater and kept the river flowing farther. Today, the groundwater is recharged less because farmers use pumps and sprinkler systems that more precisely target crops.

There’s been increasing anxiety in the region about the river and water since the switch, says Jim Gregory, a fisheries biologist in Mackay who consults with both Trout Unlimited and the Big Lost River Irrigation District to make irrigation diversions more friendly to fish that need to suddenly swim upstream when the river starts to disappear.

"The thing is, it used to be different, and it changed within people’s lifetimes," Gregory said. "It’s not that it changed since ‘back when my grandpa bought the farm’; we’re talking about ‘back when I was in high school,’ or even more recent."

So how do you regulate a river that disappears?

That question has always fallen to the federal government, because Idaho law says its state and local environmental regulations must be "no more stringent" than federal ones.

Many in Idaho bristle at regulations of any kind, preferring to respect landowners’ rights to do as they please. State law regulates only water rights and water reuse. Ronald Carlson, a former regional manager with the Idaho Department of Water Resources, says that’s the way it should be.

"The whole Clean Water Act is not a necessary piece of legislation," he said. "There was no reason for the federal government to get involved at all."

But Idaho does acknowledge that what happens on the Big Lost affects the Snake River.

The connection has been well-documented in a water rights adjudication between irrigators across the state and fish farmers near the Snake River who rely on cool, clean spring water that originates in the Lost drainages. Irrigation districts along the Big Lost have had to create groundwater recharge projects in old gravel pits to satisfy the terms of that adjudication.

What WOTUS says about
the Big Lost River

The proposed WOTUS rule would regulate only waters that have "relatively permanent" surface water connections to downstream navigable waters.

The regulation does not directly address the concept of an isolated river. But it cites the 2001 Solid Waste Agency of Northern Cook County v. Army Corps of Engineers Supreme Court ruling that Clean Water Act jurisdiction could not extend to isolated waters.

That ruling, the Trump administration writes, "calls into question the agencies’ authority to regulate non-navigable, isolated, intrastate waters that lack a sufficient connection to traditional navigable waters, and suggests the agencies should avoid regulatory interpretations of the [Clean Water Act] that raise Constitutional questions regarding the scope of their statutory authority."

"The river disappears, but the pollution doesn’t," she said. "And for the areas that are not underground, this is a working river, and there are plenty of people who use it for irrigation and watering crops and livestock."

Drinking water for much of the area comes from wells, drawing from the same aquifer the Big Lost disappears into.

For its part, the Clean Water Act emphasizes protecting waterways that are "navigable" and those that have a chemical, biological or hydrologic influence on them.

But the question of how to regulate portions of the Big Lost that flow away from the navigable Mackay Reservoir has caused EPA and the Army Corps of Engineers trouble since 2001. That’s when the Supreme Court ruled "isolated" waters weren’t protected by the Clean Water Act. Most isolated waters are wetlands or lakes. An isolated river or stream is far more unusual. Regulators decided to keep protecting the Big Lost, even though they weren’t sure the decision would stand up in court.

"We sort of tried to keep it quiet inside the agency because we didn’t want to create low-hanging fruit for someone to file a challenging lawsuit on," former EPA Office of Water attorney Mark Ryan said.

That was tested in 2003, when the Department of Energy argued Idaho National Lab shouldn’t have to continue tracking whether wastewater reached the Big Lost.

The monitoring program cost $1 million annually, but the Big Lost hadn’t flowed onto INL property since 1987.

"It was a dry channel. It’s not like anybody’s drinking water was being impacted," recalled Ray Swenson, an attorney at DOE contractor Bechtel who worked on the case. "It all seemed a little pointless to me."

EPA ultimately "punted," said Ryan, and ruled that INL could stop monitoring because no pollution made it to the riverbed.

"We didn’t want to answer the question of whether the river was protected by the Clean Water Act and have to defend that in court," Ryan said.

A few years later, the Supreme Court issued a new decision on which waterways could be covered by the Clean Water Act, opening the door for isolated waters to be protected if they had a "significant nexus," or a biological, chemical or hydrologic impact, on larger bodies of water.

Ryan said his team seriously considered asserting there was a significant nexus between the Lost drainages and the Snake River, but "the facts weren’t the greatest there," and they couldn’t convince staff in EPA’s Office of General Counsel.

‘Bulldozers back in the river’

Regulatory confusion over the Big Lost could soon be resolved thanks to the Trump administration’s WOTUS proposal. It would regulate only waters with surface connections downstream.

"Coverage under previous rules has been questionable; exclusion under the proposed rule is certain," Ryan said.

Wood and Gregory fear for the Big Lost’s future and worry that the history of particularly nasty water wars on the river could preview what’s to come without the Clean Water Act’s protection.

During one infamous conflict in 1921, farmers angered by what they saw as excessive diversions from Mackay Reservoir tried to blow it up. Local legend has it that when the farmers arrived at the dam wall, the operator said they didn’t have enough dynamite to do damage. He suggested targeting a specific diversion canal instead, and the explosion sent water back to the river’s natural channel.

Decades later, the local irrigation district decided that straightening portions of the Big Lost would make it less likely to sink. An employee plowed his way upstream in a bulldozer and stopped, according to local lore, only when one landowner took out his rifle and threatened to shoot.

That history means the Big Lost is vulnerable, Gregory said.

"I don’t know if they would ever go to court to say ‘this is not protected’ if there were a question on it, but if the Big Lost definitely wasn’t regulated, there would be bulldozers back in the river right quick," he said.

"There is a long history of people in this area and irrigators not always following the rules," she said. "So the fewer rules there are, or the less they are enforced, the higher likelihood there will be a repeat of the damaging activities that happened back in the day."

‘They just see a river’

Kent Fletcher, an attorney who represents the local irrigation district, said he would be shocked if the Big Lost wasn’t protected.

His clients have supported the Trump WOTUS proposal because they want to make sure the Clean Water Act doesn’t regulate their irrigation diversions.

But, he said, "the river is clearly a WOTUS."

"I don’t know if any river that runs year-round can be exempt from the Clean Water Act," he said. "The Big Lost is a main river; it does run year-round. It’s just that it ends."

For now, the Big Lost remains in a state of regulatory limbo.

The Army Corps has issued more than 30 Clean Water Act permits, mostly for erosion control, on the river in the past two years. Mackay’s wastewater treatment plant also has a federal permit for discharges into wetlands neighboring the river.

Project Manager Rob Brochu said his agency has "been trying to avoid making a decision" over the Big Lost’s jurisdictional status for years.

More people apply for permits in years when the river flows farther downstream, he said, and the Army Corps’ current policy is not to question whether a permit is needed on the Big Lost if someone applies for one.

"I think most people figure they need a permit because they look at it," Brochu said. "They just see a river."