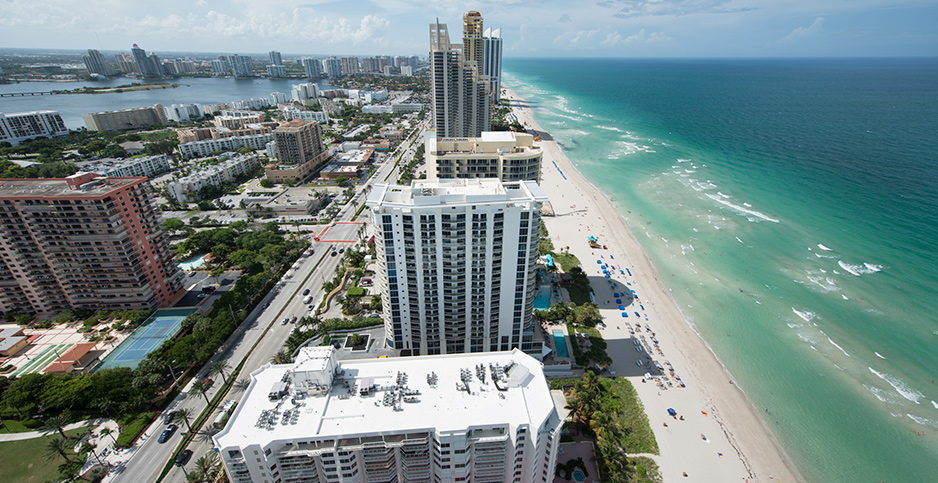 Miami and other places along the Atlantic and Gulf coasts face risks from storm surges, according to a new report. Jimmy Baikovicius/Flickr

Development along the Atlantic and Gulf coasts is inflating both the number and value of U.S. homes exposed to storm surge from hurricanes and tropical storms, a new analysis has found.

According to the 2019 Storm Surge Report, which real estate analytics firm CoreLogic Inc. has published annually for a decade, the total value of at-risk properties from the leading edge of a hurricane is now $1.8 trillion, a slight increase from last year.

Storm surge exposure is especially high in major U.S. metropolitan areas in low-lying coastal zones. New York and Miami are most at risk with a combined 1.5 million homes that could be damaged or destroyed by walls of water carried onshore by a major storm.

Miami leads in the total number of threatened homes, at nearly 792,000 properties, while New York leads in the value of exposed real estate, at $283 billion.

When factoring for adjoining counties, the Greater Miami and New York regions have roughly the same number of surge-exposed homes — around 830,000 properties — but the value of New York’s at-risk properties is roughly double Miami’s, at $330 billion.

The two Atlantic Coast cities far outpace the next highest metro area, New Orleans, where roughly $101 billion in residential property is at risk from surges. Florida’s Tampa-St. Petersburg has more individual properties at risk than New Orleans, but the reconstruction cost value of the Tampa homes is lower, at $84.1 billion.

"Hurricane damage is multifaceted," CoreLogic said. Many variables determine how real estate is affected by storm surge. These include shoreline characteristics, ocean depth near the shore, demographic factors and characteristics of individual storms.

For example, while exposure to storm surge is very high in Miami due to the large number and higher value of homes, the area has historically had lower-than-average damage from surges because ocean depths are deeper, mitigating the intensity of surges. In contrast, central Louisiana has lower-than-average risk because it is less populated, even though much of the state’s coastal zone is at or below sea level.

Tom Jeffery, a senior hazard scientist at CoreLogic and the report’s primary author, said another factor driving up storm surge risk is the continued population growth and development of the nation’s shorelines. He said the last time exposure to surges dropped was after the economic crisis of 2008-2009, when property values fell precipitously in states like Florida.

Florida also has had the largest number of land-falling hurricanes of the 19 states studied. Twenty-nine storms of Category 3 or higher have struck Florida since 1900; on average, a major hurricane strikes the state once every four years, the analysis found. The most recent was Hurricane Michael in October 2018.

The next highest state for total land-falling storms was North Carolina, with 23, most of which were Category 1 or 2 storms. But total economic losses from hurricanes like Florence, a Category 1 storm, have been much higher due to storms’ size and precipitation characteristics.

Hurricanes and tropical storms may temporarily reduce the number and value of some coastal properties, but population growth and new development still outpace those downward pressures.

"It’s not massive, but there will always be a trend of people wanting to live in these coastal areas, and we do not expect to see that change," Jeffery said.

He said the analysis involved applying detailed property information to storm simulations and probability models that indicate how much risk a particular state or metro area faces from storm surge. The analysis did not account for climate change, which scientists say will greatly increase risk to coastal properties due to higher seas, more intense storm surges and other factors.

The analysis also assumes a total loss for storm surge-affected properties and the full value of reconstruction. Many homes damaged by hurricanes and tropical storms do not involve 100% losses, the authors note.

"It’s not our intent to make people think the sky is falling. We’re looking at the entire coast, and no storm in any given season is going to inundate all those properties. But the probability analysis brings it home a little bit more to people," Jeffery said.