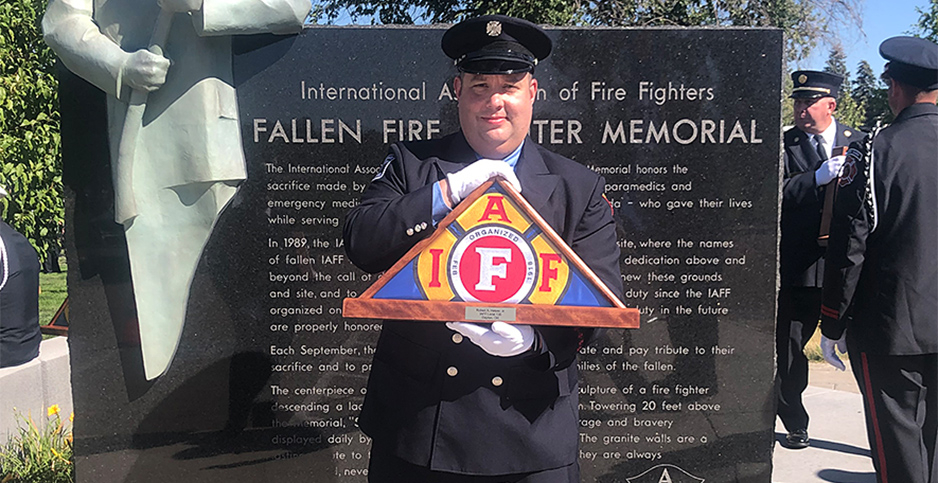 Jim Burneka at the International Association of Fire Fighters' annual memorial for those who have died from the job, including of cancer. Burneka

He knew it was coming.

Having spent half of his 20-year career educating other firefighters about how to protect themselves from toxic smoke on the job, Jim Burneka wasn’t surprised to hear he had thyroid cancer last month.

"I’ve known for a while that it wasn’t a matter of if, but when," he said. "I know I’ve been a ticking time bomb."

The chemical cocktail inhaled or absorbed into skin while battling blazes gives the nation’s roughly 400,000 career firefighters a 9% greater chance of being diagnosed with cancer and a 14% greater chance of dying from it than the general population, making cancer the top cause of line-of-duty death in the fire service.

Perhaps no one knows that better than Burneka, 41, a member of the Dayton Firefighters Local 136 who 10 years ago started his own cancer consulting business to educate other firefighters about the risks of the job. He also hosts a podcast, "The 25 Live," distributed by the nation’s largest fire magazine, Fire Engineering.

A new member of the "club you never want to be a part of," Burneka is now turning the microphone on himself, hoping that even more firefighters will learn from his experiences. A show usually devoted to interviewing experts about the latest research, Burneka’s podcast has become a platform for him to talk about his diagnosis, treatment options and workers’ compensation claims.

"I’m trying to be like Gandalf," Burneka explains, referencing the wizard protagonist in "The Lord of the Rings" trilogy. "When he starts out, he is Gandalf the Grey, and he’s a pretty good wizard, but then some bad stuff happens to him and he just levels up and is able to do even more."

A self-described "’80s nerd," Burneka joined the fire service right out of high school after a friend of his dad’s invited him on a ride-along.

Naturally gregarious with a sarcastic, witty humor, Burneka was instantly attracted to the camaraderie of the fire station — "how the guys got along with each other and how much fun they had."

He knew the job was dangerous — that he could be enveloped in flames, fall through a weakened floor or have a roof cave in on him — but "back then, it was a macho thing, that if you died, you died with your boots on."

At the time, wearing unwashed, soot-covered protective jackets and helmets around the station was considered a badge of honor, not, as Burneka would later learn, a source of contamination.

The "old timers" at the station, Burneka recalled, were "always trying to prove how tough they were" and joked that mustaches were the only filter they needed for smoke.

"I wanted something where every day was different, and this definitely fit the mold, but the risks I am facing now were not apparent then," he said.

‘The perfect storm for cancer’

Burneka eventually learned about cancer risks in the fire service about a decade into the job, after being tasked with finding a charity to donate to for a union fundraiser. He landed on a then-new organization called the Firefighter Cancer Support Network.

Speaking with them was the first time, Burneka heard about how the smoke enveloping firefighters as they work contains a toxic soup of chemicals, many of which are known carcinogens.

"Once he learned about it, I think he felt like it was just a matter of time, and, you know, it turns out he was right," said Sara Jahnke, director of the Center for Fire, Rescue & EMS Health Research at the National Development & Research Institutes Inc. She met Burneka while working on a white paper about steps firefighters could take to reduce exposure — like cleaning their gear and showering after each fire or wearing respirators anytime they are near a blaze.

"Firefighting is really the perfect storm for cancer," she said.

Indeed, studies have shown firefighters are more likely than the general population to get cancers for just about every part of the body — from brain, to colon, to skin. Burneka’s diagnosis of thyroid cancer is 22% more common among firefighters.

Jahnke describes Burneka as part of a "sandwich generation" who were midcareer when the first research about the increased cancer risk became more widely known within the service.

Older firefighters didn’t know to take precautions against smoke but were battling fires of "legacy furniture" made of cotton and wood, which don’t release as many chemicals when they burn. Today’s fires, with burning plastic consumer goods, "burn faster, hotter and dirtier than they ever have before," Jahnke said.

Rookies coming up behind Burneka will know how to protect themselves from the very start of their careers. But Burneka was in the dark for half of his.

That’s why, he says, in the days after being diagnosed, Burneka couldn’t stop thinking about his "sins" — things he and other firefighters did for decades, unaware they could increase their risk.

That includes all the times he didn’t wear his respirator mask at the scene of a fire because carbon monoxide and hydrogen cyanide levels weren’t high enough to require it. Burneka thinks about the other chemicals — from polychlorinated biphenyls to polycyclic aromatic hydrocarbons to per- and polyfluoroalkyl substances to flame retardants — he likely inhaled instead because he hadn’t known to worry about them or that wearing the mask could protect him.

"The stuff I did, especially early on, will probably take years off my life," he said. "There’s 11 years of doing dumb shit that nobody realized was dumb but, looking back, was really, really dumb."

According to firehouse records, by the time of his diagnosis, Burneka had responded to 480 fires over the past 20 years. The number of hours he’s spent at an active fire scene totals nearly an entire month of consecutive exposure to smoke, and with it, cancer-causing chemicals. That doesn’t even account for the diesel exhaust from trucks he may have inhaled or the carcinogens contained in firefighting foam and protective gear (Greenwire, Feb. 16).

There’s no way to know which exposure caused Burneka’s cancer, or if it was a combination of some or all of them. And it frustrates him.

"Was this something I did in year one?" he wonders. "You’re never going to know exactly what it was."

With five years left until he can earn a pension, Burneka feels "stuck and like it’s a no-win situation."

He’s terrified that his sons, aged 4 and 7, might want to follow in his footsteps and join the service one day. He cringes whenever friends give them firefighting costumes or toys.

"I want my kids to enjoy their lives and not have these fears," he said.

Because he has been working on cancer in the fire service for so long, Burneka knows that he is actually lucky.

He caught the cancer early, after his wife, Lauren, told him his neck looked "funny" over dinner last year. Burneka knows guys who ignored similar comments from their spouses only to discover their illnesses too late to intervene, so he made a doctor’s appointment even though he didn’t see anything different about his neck.

The doctor found a nodule in his thyroid, nothing to worry about at the time, but wanted to monitor the situation. When tests from a routine check-in this spring found papillary thyroid carcinoma, it was before the cancer had spread.

That means surgeons last week were able to cut out the tumor without removing his entire thyroid. Burneka won’t have to do any additional treatments after he recovers from the surgery.

While physically fine, the diagnosis has shaken Burneka.

"They had to cut into my body and remove something that shouldn’t be there. It makes you think, ‘OK, what else is going on that you haven’t found yet?’" he said. "All I know is I am going to be navigating my life with my check engine light on."

He also worries about his podcast, and that he let his listeners down by getting cancer after preaching prevention for years.

"I really did so many of the right things," he said. "As soon as I found out about the risks, I was proactive."

Now, he said, he envisions listeners thinking, "Well, shit, if Jim did everything he could and it still wasn’t enough, it’s just a matter of time for me."

His friend, Diane Cotter, a self-described "fire wife" who advocates for firefighting gear to be made without carcinogens, said she believes Burneka’s openness will help others wake up to the dangers of the job.

Cotter, whose husband retired from the service after being diagnosed with prostate cancer five years ago, said working in the field is hard because so many do fall ill.

But Burneka’s years of advocacy, she believes, will help him get through to firefighter’s who may have become desensitized.

"He is a leader in the fight against firefighter cancer who now has cancer," she said. "Unfortunately, it is very poetic."