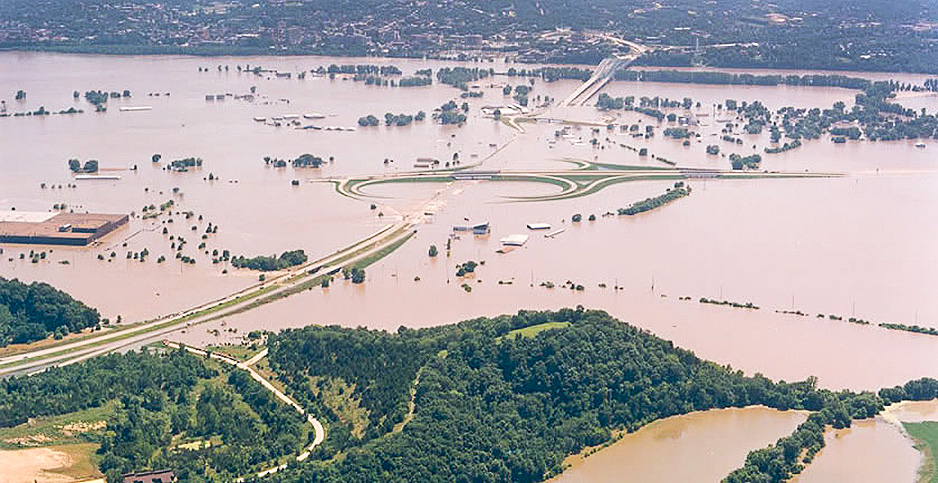 The Great Flood of 1993 inundated communities along the Mississippi and Missouri rivers. Jefferson City, Mo., is pictured. USGS

The swollen, churning, unrelenting river that’s flooding towns from Minnesota to Louisiana this month is not Mark Twain’s Mississippi River.

But the spring floods of 2019 — which experts generally agree are the most damaging in 25 years — are among a new generation of Mississippi River crests that bear only passing resemblance to the floods of distant past.

Experts say the new floods come faster and more furiously than their 20th-century counterparts. They last longer and are less predictable. And they cause more property damage, especially in the basin’s upper reaches where wetlands, forest and prairie have been replaced by subdivisions, office parks and drain-tiled farm fields.

"As Dorothy said in 1939, ‘Toto, I have a feeling we’re not in Kansas anymore,’" said Gerald Galloway, one of the nation’s leading experts on Mississippi River hydrology and a professor of civil and environmental engineering at the University of Maryland, where he is an affiliate of the Center for Disaster Resilience.

Galloway would know. In 1994, as a brigadier general in the Army Corps of Engineers, he led the interagency committee charged with identifying the root causes of the 1993 Mississippi River flood and proposing a long-term approach to floodplain management.

The 1994 panel, reporting to Vice President and future climate activist Al Gore, identified several key steps the federal government should take to reduce future flood risk: First, increase spending on levee repair, maintenance and security; second, improve coordination among federal, state and local authorities who oversee the river and its floodplain; and third, foster engagement with floodplain residents, farmers and businesses about how to mitigate risk from rising water.

"Twenty-five years later, we’re still having the conversations. Unfortunately, not much has changed in the way we go about our business on the river," Galloway said last week. As Gilbert White, a pioneer in U.S. natural hazards research, used to say, "’The half-life of the memory of a flood is remarkably short.’ Once it’s past, we get back to regular business where potholes seem to eclipse levee failures," Galloway said.

The most recent National Climate Assessment, for example, states that worsening flooding on U.S. rivers has caused "more long-term interstate freeway closures, while high and low extremes in water levels in the Mississippi River and other waterways have disrupted navigation and commerce." Over the 21st century, between 5,000 and 6,000 bridges will be compromised from unprecedented flooding, while "increases in rainfall intensity can accelerate bridge foundation erosion and compromise the integrity and stability of scour-critical bridges," the NCA said.

Communities may have little choice but to adapt, relocate or die, as the cost of living with chronic riverine flooding goes well beyond what many communities can afford.

Early estimates from AccuWeather place the damage from this spring’s Mississippi River floods at $12.5 billion, the equivalent of a $1 billion disaster for every riverfront city of 50,000 or more between St. Cloud, Minn., and New Orleans.

That compares with $21 billion for the 1993 Great Flood, according to a NOAA tabulation of billion-dollar weather and climate disasters since 1980. Adjusted for inflation, the 1993 flood would be a $37 billion event today.

Experts who study climate change and river flooding say connections between the two phenomena have been less studied than other climate change imprints such as sea-level rise. Winter snowmelt and spring rains have always been part of life on the river.

But Andreas Prein, a climate scientist and expert on extreme weather events at the National Center for Atmospheric Research, made clear that extreme weather events are almost always spurred by anomalies in climate conditions, and the increased frequency and intensity of Mississippi River floods suggest that climate warming is at play.

"Mississippi River flooding doesn’t occur from one day to the other, so there’s always a story involved with these types of major events," Prein said last week. "In this case, we saw a record wet winter followed by a very wet spring and highly saturated soils.

"This is already telling you something about atmospheric conditions," he added, but it is difficult to separate climate warming from other variations in weather, such as El Niño-Southern Oscillation patterns that involve changes in water temperatures in the central and eastern Pacific Ocean.

According to NOAA, the Northern Hemisphere is experiencing a persistent weak El Niño that could last through this summer, meaning warmer, wetter conditions will persist in the United States.

"What we see from climate change is that these precipitation extremes are getting worse," Prein said. "Climate attribution studies are trying to dig into that."

But Prein and colleague Andrew Newman, an NCAR expert in hydrology and hydrometeorology, said land-use changes, stormwater flows and channelization of the Mississippi are "probably overwhelming climate change" as drivers of flood risk. Climate change, they said, acts like an accelerant on flood conditions.

Either way, the Mississippi River "is a very different river today than we saw 80 years ago," Prein said.

Larry Larson, the co-founder and director emeritus of the Association of State Floodplain Managers, said that "there are all kinds of ways you can get flooded on major rivers," but there’s no overlooking the frequency and intensity of recent precipitation events, especially in the lower and central Mississippi River Basin.

"You add that rainfall to peak snowmelt coming down from places like Minnesota and Wisconsin, and there’s just no getting around it," he said. "These rivers will stay up for weeks and weeks, and we have got to start talking about pulling back. You can’t keep that river pinched in. You’ve got to open it up and give the river some room."