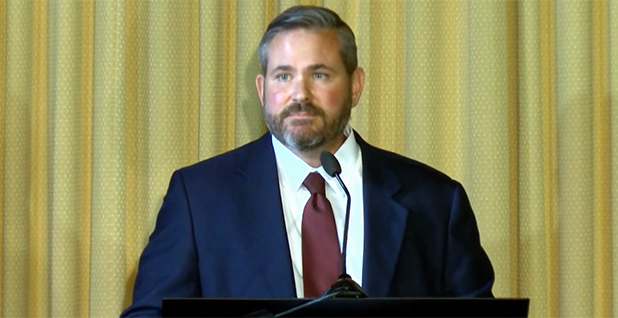 Employees and union officials at EPA are frustrated with the agency’s decision to have a top leadership aide work from his home state starting next month.

The move has reignited tensions over a recent contract imposed by EPA management limiting teleworking flexibility for many agency staffers.

Last week, the agency announced Henry Darwin is stepping down as acting deputy administrator Sept. 1 but returning to his original role as assistant deputy administrator, according to an internal email obtained by E&E News. In addition, Darwin will work from an EPA office in Arizona, where he had served in state government as chief operating officer under Gov. Doug Ducey (R) and earlier as director of the Arizona Department of Environmental Quality.

"Given the amount of time he already spends traveling to the regional offices … his relocation to Phoenix should not impact his ability to help us become even more effective in carrying out our very important mission. In addition, Henry will be here at headquarters on a regular basis," EPA Administrator Andrew Wheeler said in the email to staff sent Friday.

But Darwin’s move is causing friction with some in the agency.

The majority of EPA’s workforce have recently seen their work schedules upended as management last month imposed a new contract with bargaining unit employees for American Federation of Government Employees Council 238, the agency’s largest union. That contract has placed new limits on telework, requiring those staff to report to their work sites four days per week. Many of those employees used to work from home two days a week, using that flexibility to pick up their kids from school and cut down on time spent commuting.

"Ironic if he has full-time telework while they gut rank and file’s telework," Schulze told E&E News. "More of the same ‘do as we say, not as we do,’ just in a different package."

She added that EPA told staff in its Houston regional lab that they had to relocate to Ada, Okla., and wouldn’t consider reassignments to the main Region 6 office in Dallas.

Others at EPA were unhappy with the announcement about Darwin.

"Henry should eat his own dog food and not be allowed to telework either," an EPA employee said.

In response to criticism of Darwin’s relocation to Arizona, EPA spokesman Michael Abboud said, "He doesn’t have telework, he has to report to a duty station."

In Arizona, Darwin will work on integrating EPA’s "Lean" management system — a set of principles he has long championed to streamline government operations and make them more effective — with the Government Performance and Results Act, the GPRA Modernization Act, and the Foundations for Evidence-Based Policymaking Act, Wheeler said in his email.

Wheeler also announced that Darwin’s wife, Veronica Darwin, left EPA on Aug. 9 and has already returned to Arizona to work for the state there. She worked at the agency for more than two years, joining EPA with her husband as a senior adviser in the Office of Land and Emergency Management.

"While at EPA, Veronica managed implementation of the Superfund Task Force recommendations, and led other Administrator priorities like children’s health, and the development of the action plan for lead. These key initiatives will remain Administrator priorities, however Veronica’s leadership will be greatly missed," Wheeler said.

She already has Arizona state government experience, including having worked at ADEQ, and also served in the EPA Region 9 office in the past.

Wheeler also said that Doug Benevento, formerly the head of EPA Region 8 and now senior counselor for regional management and state affairs, would take on "a senior leadership role" as associate deputy administrator at EPA.

"Along with his other new duties, he will continue to manage the regions and serve in an ombudsman role between the regions and national programs on the implementation of Agency priorities," Wheeler said.

Some EPA employees were confused by Wheeler’s reference to "EPA’s Arizona office" in his email, but the agency does have a facility in the state.

Abboud said Darwin’s duty station will be Phoenix, where EPA space is located in the Sandra Day O’Connor U.S. Courthouse. The agency has been there since 2012, with its current agreement with the General Services Administration expiring at the end of June 2021, said the EPA spokesman. Abboud also said there is currently one EPA employee in that office.

That location is the Phoenix Resident Office run by EPA’s Criminal Investigation Division. That division has special agents stationed in more than 40 locations across the country, keeping them near by to track down environmental crimes.

"The space is meant to be used where it can be across the agency to support the broader mission," said the former official. "All the office space is built to GSA specs and can be used to carry out folks’ duties, connectivity and otherwise."

Others, however, argued that Darwin’s move wasn’t based on necessity.

Phoenix and EPA have been brought to attention before under the Trump administration.

Republican donors and Arizona real estate developers met with then-EPA Administrator Scott Pruitt in 2017 to discuss a proposal to have the agency move its Region 9 office from San Francisco to Phoenix. At the time, an EPA spokeswoman said the agency had no plans to do so (Climatewire, Oct. 19, 2017).

Top EPA officials have come under scrutiny for keeping a home far away from their place of work, whether it was headquarters or somewhere else.

In 2016, then-House Science, Space and Technology Chairman Lamar Smith (R-Texas) wrote to EPA questioning travel to Indiana by Janet McCabe, acting air chief at EPA during the Obama administration. McCabe kept her home in Indianapolis and commuted to Washington, D.C., for the workweek. EPA said she paid for all her personal travel (Greenwire, Feb. 23, 2016).

Mike Stoker, the EPA Region 9 head under the Trump administration, was the subject of a management alert by the agency’s inspector general for frequent travel that often kept him away from EPA’s San Francisco office, where more than 90% of his staff works. EPA Chief of Staff Ryan Jackson defended Stoker’s trips, saying he was expected to travel and be accessible throughout the region (E&E News PM, March 21).

Regarding Darwin’s relocation to Arizona, several EPA employees said it was special treatment for a top agency official.

"To have his title, he should be doing more than just Lean work," said one. "They talk about the D.C. swamp. They have just replaced it with a satellite office cesspool."