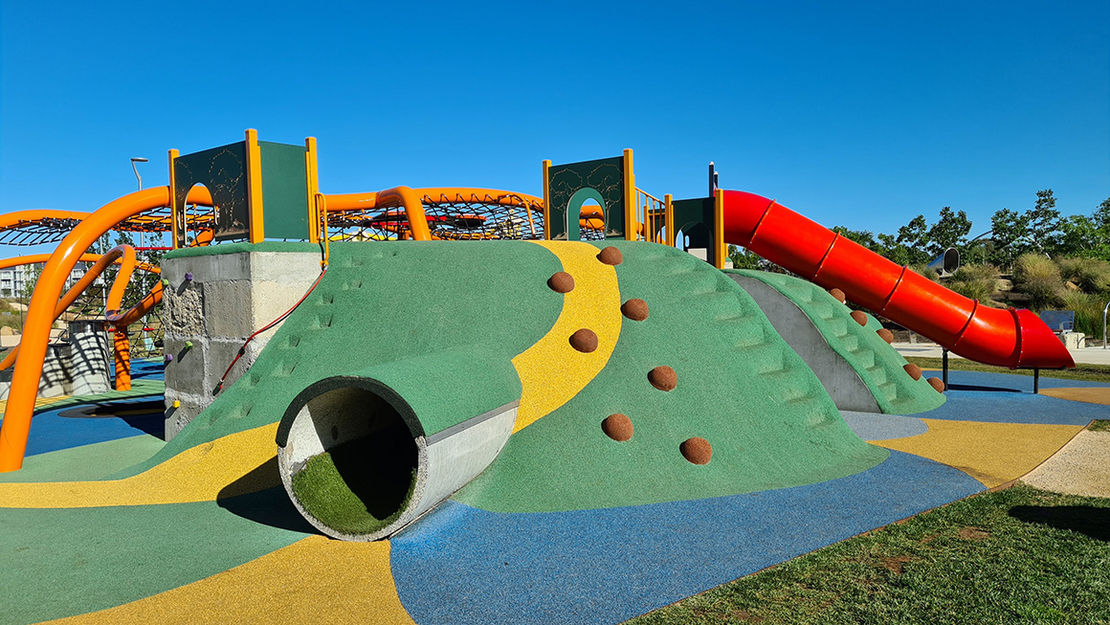 When Diana Zuckerman was growing up, there was dirt underneath the slides. Her children played on playgrounds placed atop sand and mulch. But, today, when she drives around her Bethesda, Md., neighborhood, all Zuckerman sees are rubber playgrounds.

The sight concerns Zuckerman, because as president for the National Center for Health Research she has testified in front of multiple municipal and even state governments about the toxic chemicals that can lurk in rubber playground surfaces.

The chemicals can include neurotoxins like lead and other heavy metals, as well as carcinogenic chemicals like polyaromatic hydrocarbons, endocrine-disrupting chemicals like phthalates, and chemicals linked to other organ damage like volatile organic compounds and PFAS, or per- and polyfluoroalkyl substances.

“All these rubber surfaces, they can be very pretty, and when you know nothing, you think it’s great because if my child fell on it, it is so spongy and pretty and safe,” she said. “But we actually don’t believe that it’s safe from the chemical exposure perspective.”

Concerns about modern playground surfaces were first raised decades ago, when recycled tire crumb rubber became a popular playground surface. The recycled tires often contained lead and other heavy metals, and public health experts were especially concerned that using the bite-sized material on playgrounds could unnecessarily expose small children, particularly toddlers, who are prone to putting objects in their mouths.

But many continue to install what’s called “pour in place” rubber, flat, spongy rubber surfaces that can contain other chemicals of concern, like polyaromatic hydrocarbons, phthalates, and volatile organic compounds. Those more solid rubber surfaces can also contain additives and binders that could harm the health of children, though the exact chemicals vary by manufacturer.

Artificial turf, long-popular on athletic fields, has also been marketed as a playground surface. Some PFAS are used to manufacture the plastic grass blades (Greenwire, Dec. 8, 2021).

Sarah Evans, an assistant professor of environmental medicine and public health at Mount Sinai Hospital in New York City, says those poured in place rubber playgrounds still pose exposure risks to kids. Children could pick up chemicals on their hands as they play and then accidentally ingest them when they eat meals or snacks at the playground.

“We are very concerned about that,” she said. “And we don’t have a good handle of what is in those products.”

Indeed, the exact risks rubberized playgrounds pose to children are unknown, in part because the federal government’s efforts to investigate the issue have been stalled by both the Trump administration and the coronavirus pandemic.

In 2016 EPA completed a report looking specifically at tire crumb rubber playgrounds meant only to explain the best ways to test such surfaces for chemicals. A second report meant to characterize potential human exposure to tire crumb rubber has never been released.

EPA referred questions to the Consumer Product Safety Commission, which regulates other aspects of playground equipment safety, But efforts to investigate the issue there have similarly stalled.

In 2019 regulators there completed a “survey” of children’s “interaction and potential exposure to playground surfacing materials,” asking parents and caregivers about various behaviors their children displayed at playgrounds to get a handle on how they might be exposed to chemicals in the surfacing materials.

That survey found children 5 years old and younger commonly exhibited behaviors that could mean they are more exposed to playground surface chemicals. Children in the South, the report found, may experience more exposure to chemicals in the playground through their skin as they are more likely to wear shorts or short sleeves and to play barefoot.

Children who use pacifiers at the playground, eat snacks before washing their hands, or suck their fingers or thumbs, would also have more potential exposure through potentially ingesting chemicals.

But the CPSC never completed a risk assessment to determine exactly what those exposures might mean to kids’ health: The study was meant to begin in spring 2020, when the coronavirus pandemic hit. A spokesperson for the agency provided no updates to the initiative.

In the absence of federal action, industry has continued to say that all playground surfacing options are safe.

The International Play Equipment Manufacturers Association referred questions about rubber playgrounds and toxic chemicals to a 2010 statement posted on its website saying the group “does not recommend any particular surfacing material over another for use on playgrounds.”

Rather, the association “encourages its members to follow the guidelines of the CPSC.”

But researchers at the University of Massachusetts, Lowell’s Toxic Use Reduction Institute, say there is enough information for them to recommend that municipalities stay away from rubberized playground surfaces.

They commonly receive inquiries from municipalities asking what kinds of playground surfaces are safest.

Their answer: Wood products, especially something called engineered wood fiber, which looks like mulch, are the safer bet for playgrounds. Not only does engineered wood fiber not contain chemicals of concern, but it also is soft enough to prevent serious injuries if children fall and can be compliant with the Americans with Disabilities Act.

“Children are more vulnerable to the effects of toxic chemicals because they are developing and their detoxification mechanisms are immature,” Rachel Massey, TURI senior associate director and policy program manager said. “They spend a lot of time on the ground, putting their hands in their mouths, so any surface those kids come into contact with, the children will be exposed to some of that.”

Evans, at Mount Sinai, said she also hears from parents who are concerned that their cities and towns have already installed rubber playgrounds.

Playing outside, even on a rubber playground, can be very important for kids’ development. So, rather than eschew the playground altogether, Evans recommends that parents be extra vigilant if their children play on rubberized surfaces and make sure hands are washed before children eat or as soon as they get home. Kids who play on crumb rubber should shake out their clothes and change when they come home.

“We recognize the importance of outdoor play, so we want kids to be playing outside and going to playgrounds,” she said. “We just want to make sure we do everything we can to reduce their exposures.”