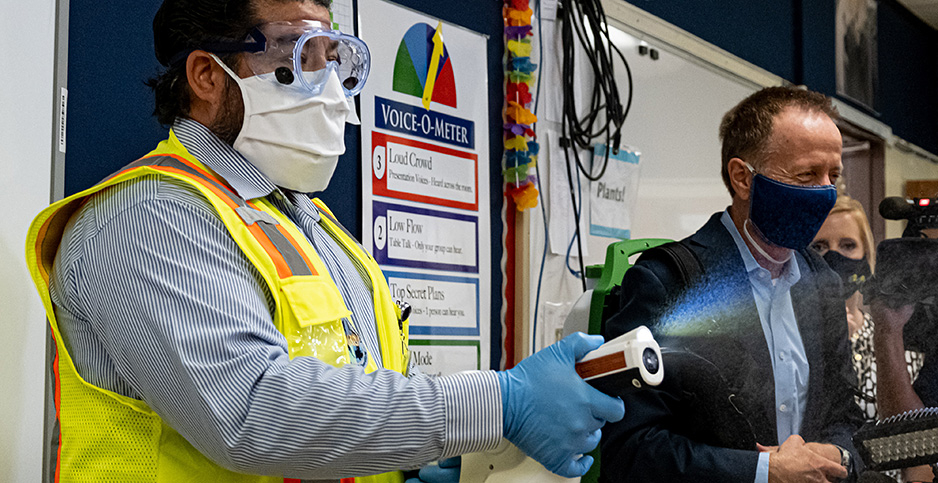 Using such chemicals in schools, which are often poorly ventilated, and around kids with vulnerable, developing respiratory systems could create a toxic result, said Alexandra Gorman Scranton, director of science and research at Women’s Voices for the Earth.

"Kids and teachers aren’t trained in how to use these products — kids aren’t supposed to be near those wipes," she said.

The CDC’s guidance on schools reopening cautions that anyone using disinfectants should be properly trained in their use and wear protective gear, but Holm said she wished it would explicitly describe the dangers of allowing students to use disinfectants, which could be absorbed through skin.

The Miami-Dade County school district, for example, will begin remote learning this month, with plans to move to in-person classes by the end of September. The district’s reopening plan says it will create procedures for routine deep cleaning and increase the frequency of sanitation of "high-touch areas with hospital-grade germicide throughout the day."

But even if it’s only custodial staff or teachers using disinfectants, experts say they are concerned about increased use of bleaches or ammonium.

"They had a plan at one point where half the kids would come in the mornings and half in the afternoons and the custodial staff would just mist it all in between, and I was like, ‘Oh, my God,’" said Holm, who did not want to name the district. "I ended up at a school board meeting saying, ‘I’m a national expert on this, please let me offer my services.’"

Many disinfectants work best on surfaces that have already been cleaned with soap and water to remove "organic materials," like skin cells, which can deactivate chemicals like bleach. That means while merely misting or spraying chemicals might seem like it saves time, it won’t necessarily kill the coronavirus.

"You won’t be as effective, but you’ll still have the side effects," Holm said.

Mark Miller works with Holm at the pediatric unit and directs the Children’s Environmental Health Program at California’s Environmental Protection Agency. He noted that just soap and water with a microfiber cloth kills more than 90% of microorganisms, making it potentially more effective at killing the virus — and far less harmful to kids — than misting or even wiping down with disinfectants a surface that hasn’t been pre-cleaned.