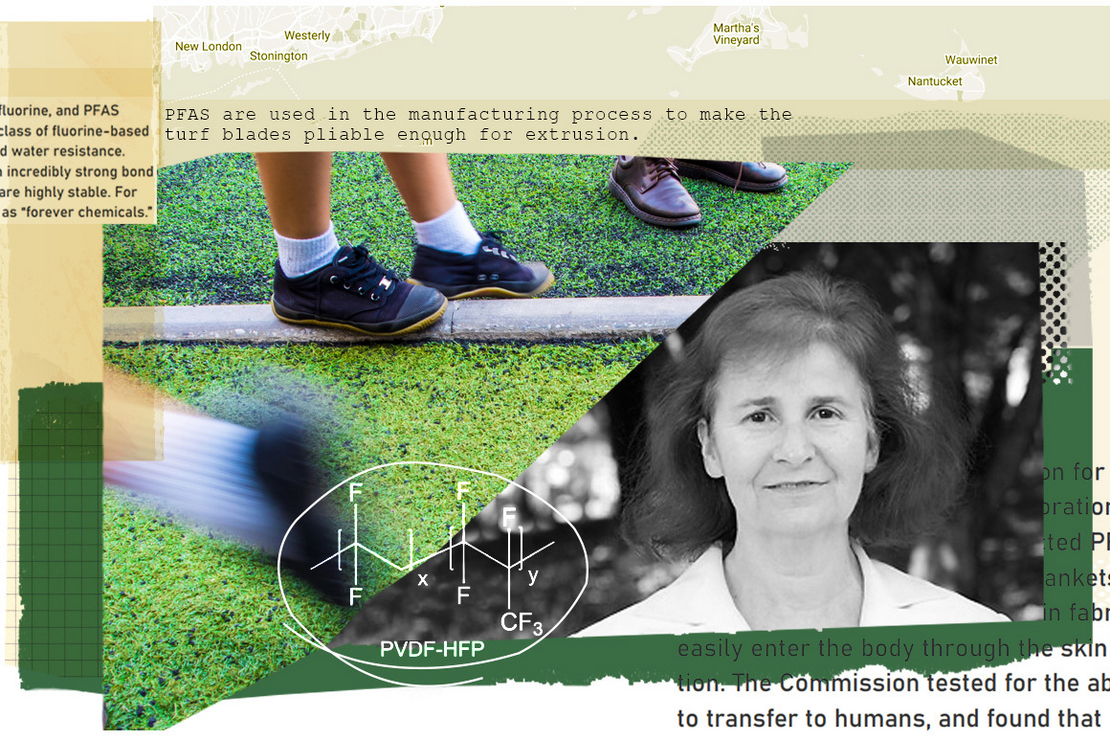 A toxicologist who touted her links to EPA while advocating for artificial turf fields and downplaying the impacts of "forever chemicals" says she has ceased her work with the agency, as one town on Martha’s Vineyard is considering banning the fields altogether.

The changes come after an E&E News article this week called into question Laura C. Green’s comments about per- and polyfluoroalkyl substances, known as PFAS, which are used in manufacturing artificial turf. Green has performed work as an EPA special government employee, and often cited her agency experience to bolster her claims about the chemicals (Greenwire, Dec. 8).

Those assertions, including that “there is no reliable evidence that PFAS harms human health,” run counter to EPA actions that include singling out one PFAS compound, PFOA, as a “likely carcinogen.” The agency is also targeting multiple compounds for drinking water advisories and regulations.

Now, Green has told a Nantucket news reporter that she has resigned from her work with EPA, while Nantucket Public Schools has similarly said it is reviewing its contract with the toxicologist.

“Dr. Green’s full contract is currently under review with no final decision as of yet,” Nantucket Public Schools Superintendent Elizabeth Hallett wrote in an email. “We have not had the chance to meet with the full Campus Wide Master Plan Committee, as these developments surrounding Dr. Green have only happened in the last 24 hours.”

EPA declined to comment when asked whether Green had, in fact, resigned. But in an email to E&E reporters following the initial article, Green said, “We learn more from our mistakes than from our successes.”

“As you grow in your careers, may you learn the difference between journalism and propaganda,” she wrote.

Prior to telling a Nantucket reporter that she was resigning her position with EPA, Green told the Martha’s Vineyard Times that questions about her agency affiliation were a “non-story.” She also called E&E News’ story “libelous propaganda” but said she did not plan to sue the outlet, nor did she explain what was incorrect in the story.

“Look, I’m a 67-year-old grandmother. If you don’t think I haven’t heard every piece of crap that any child or grandchild can throw at me, then you haven’t been around the block,” she told the newspaper.

Ayesha Khan, a stay-at-home mother who had opposed the turf fields over concerns about PFAS, said she hopes the Nantucket School Committee will soon end its contract with Green.

“We don’t often get to see people held accountable, and I hope this shook up a whole bunch of people,” she said. “This will have a trickling effect.”

Many of Green’s misleading statements about PFAS were made while she encouraged New England towns like Nantucket and those on Martha’s Vineyard to install artificial turf fields. Proponents argue the fields will bolster student athleticism, but critics have worried about the potential for water contamination and chemical exposure.

Some PFAS are intentionally used to make artificial fields because the famously moisture-resistant chemicals prevent the plastic blades of grass from sticking to manufacturing equipment.

There is minimal research available on the health impacts of the specific PFAS used in synthetic turf, like PVDF-HFP. But Green often spoke at public meetings about PFAS generally, claiming that no compounds had known health implications, even though some have been linked to testicular cancer, liver disease and weakened immune systems.

For example, she has argued that workers who manufactured PFAS for companies like DuPont and 3M “seem to be fine” and did not suffer any health effects from the chemicals despite being “literally up to their elbows in these materials.” In reality, surveys of workers at those manufacturing plants exposed to certain PFAS have shown increased incidents of liver damage and testicular cancer.

EPA, meanwhile, increasingly views PFOA as a likely carcinogen and is looking to lower a drinking water advisory to reflect mounting evidence that the chemical poses an outsized threat to human health.

On Martha’s Vineyard, the town of Oak Bluffs, Mass., where the artificial turf field has been proposed, is eyeing a severe crackdown. The town’s Board of Health has drafted regulations that would ban PFAS in artificial turf, with the new rules set to be discussed Tuesday.

In a statement, members of the Field Fund, which supports organically grown natural grass, indicated that the broader issue "is far from resolved" for Martha’s Vineyard.

"It remains unclear who introduced Dr. Green to our community, who has been funding her for the past year to act as the Martha’s Vineyard Regional High School’s expert witness for their proposed plastic field, and what the school will do now that this information has come to light," the group wrote via email.

On Nantucket, meanwhile, the issue has also mobilized local firefighters, who were already invested in fighting PFAS contamination due to the presence of the chemicals in their turnout gear (Greenwire, Feb. 17).

"There’s no way that anything she’s saying jives with the agency she says she works for," he said, noting her EPA ties.

Like other firefighters, he said the fight over artificial turf felt familiar. Firefighters feel they are seeing the same tactics used to downplay health risks and are uneasy about "industry science" being used to market a product to their communities. For them, turnout gear and artificial turf reflect a broader story about PFAS and misinformation.

"For the companies that are supposed to be protecting us, through our gear and other things, to be contributing to our cancers is very concerning to people," Bates said.

Nantucket resident Khan, whose firefighter husband believes his cancer is connected to his PFAS exposure, agreed that the issue has become deeply personal for firefighters.

"It’s the same companies, the same tactics and the same chemicals," said Khan.