Trial could end as soon as today with Trump acquittal 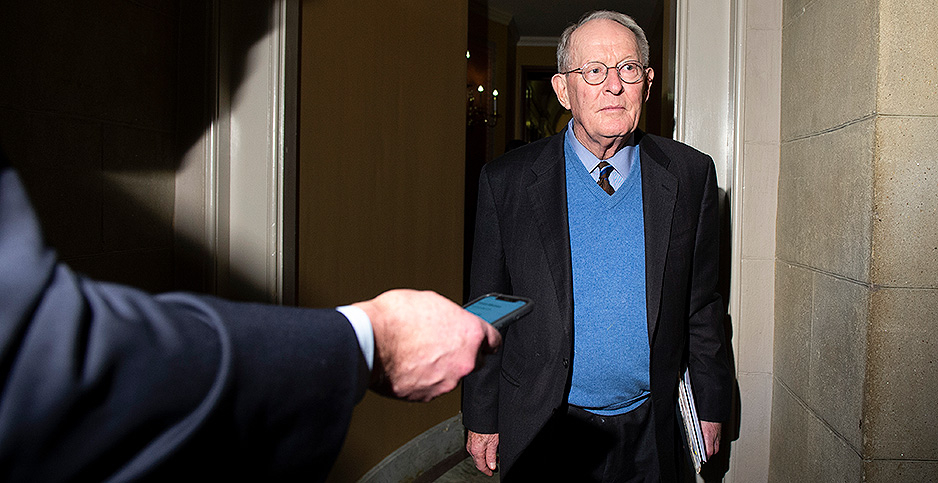 The Senate impeachment trial of President Trump could end today, with Republicans expected to be near unanimous in their opposition to calling witnesses.

If Senate Majority Leader Mitch McConnell (R-Ky.) gets his way, lawmakers would in the coming hours move to the verdict stage. They will almost certainly reject House accusations that Trump abused power when blocking aid to Ukraine and then blocked Congress from investigating.

Late last night it became clear the GOP would likely win the battle over the issue of witnesses when Sen. Lamar Alexander (R-Tenn.), who was seen as possibly supporting the idea, said he would oppose them. The retiring senator said he favored letting voters decide Trump’s fate.

Republicans control 53 Senate seats, meaning they could only afford three defections to defeat a push by Democrats to extend the trial and seek additional testimony.

Alexander’s decision became public shortly after Sen. Susan Collins (R-Maine) said she would break with her party and back calling witnesses, a move expected as she seeks re-election this year in a state that has soured on Trump.

Sen. Mitt Romney (R-Utah), a frequent Trump critic who has angered conservatives, is also seen a likely to support witnesses.

The only remaining wildcard is Sen. Lisa Murkowski (R-Alaska), a moderate who has been more willing that most Republicans to buck Trump. Last night she said she had yet to make up her mind.

"I am going to go reflect on what I have heard, reread my notes and decide whether I need to hear more," the Senate Energy and Natural Resources Committee chairwoman told reporters after the Senate wrapped up last night.

If Murkowski votes no, Republicans would have the votes to reject witnesses. But if she votes yes, the Senate would be deadlocked at 50-50 and the trial’s presiding officer, Supreme Court Chief Justice John Roberts, could opt to break the tie.

"All of us have been wondering [about a tie] because it’s uncharted territory," said Sen. Mike Braun (R-Ind.), adding that ruling would be historic because judges in past impeachments have remained neutral on calling witnesses.

Braun said Roberts could opt not to rule and the vote would stay deadlocked and fail. Many observers believe Roberts would be weary of wading into such a highly politicized case.

Senate Democrats were cautious in any comments on Roberts beyond saying he did have the right to weigh in.

House Speaker Nancy Pelosi (D-Calif.) however, openly called for judicial intervention telling reporters yesterday in the event of a tie, she would hope Roberts would intervene.

"That’s where all the momentum is right now," said Sen. John Barrasso (R-Wyo.), the Senate’s No. 3 Republican, when asked if the chamber would quickly clear the president after rejecting witnesses.

Several GOP senators said they were ready to move on from impeachment and the arguments have done little to change their opinion that the president should not be removed.

They echoed a White House talking point that calling witnesses, including former national security adviser John Bolton, could tie the chamber up for weeks amid legal wrangling.

While sounding increasingly pessimistic, Democrats believe they still have a shot at getting witnesses called.

"The fate of much of the future of how this republic conducts itself is on the shoulders of four Republicans. I believe Senate Republicans and the president’s team are worried about the vote," said Senate Minority Leader Chuck Schumer (D-N.Y.) yesterday.

Schumer reiterated that securing those GOP votes would be an "uphill fight," noting "the pressure that Trump, who is a vindictive, nasty president, and McConnell place on them is large."

Schumer said he expected his caucus to be united on calling witnesses but declined to say if some moderates — among them Sens. Joe Manchin of West Virginia and Doug Jones of Alabama, who have expressed reservations over impeachment — may ultimately vote to acquit the president.

Democrats kept up calls to hear from Bolton, stressing fresh allegations that surfaced this week that the president had told him his hold on Ukraine aid was tied directly to forcing an investigation into the Bidens.

Collins did ask yesterday if there were any "legitimate’ circumstances for a president to ask a foreign country to investigate a U.S. citizen. The issue is at the center of the charge that Trump abused his power by seeking dirt on his Democratic rival.

Rep. Adam Schiff (D-Calif.), the lead impeachment manager, said he could not think of any action where such a request would be appropriate.

But Patrick Philbin, deputy legal counsel to the president, said Trump never sought an investigation and said a president could ask another country to look into any incident that he saw as necessary to protecting United States interests.

Murkowski raised eyebrows by asking Trump’s team why they shouldn’t call Bolton but then later seemed to backtrack by joining with Alexander to query whether having the former national security adviser testify would change anything.

Neither party believes there is any realistic shot at the Senate removing Trump from office. It would require 67 votes and be unprecedented in the nation’s history.