Tribes expect a voice on land and waters under Haaland 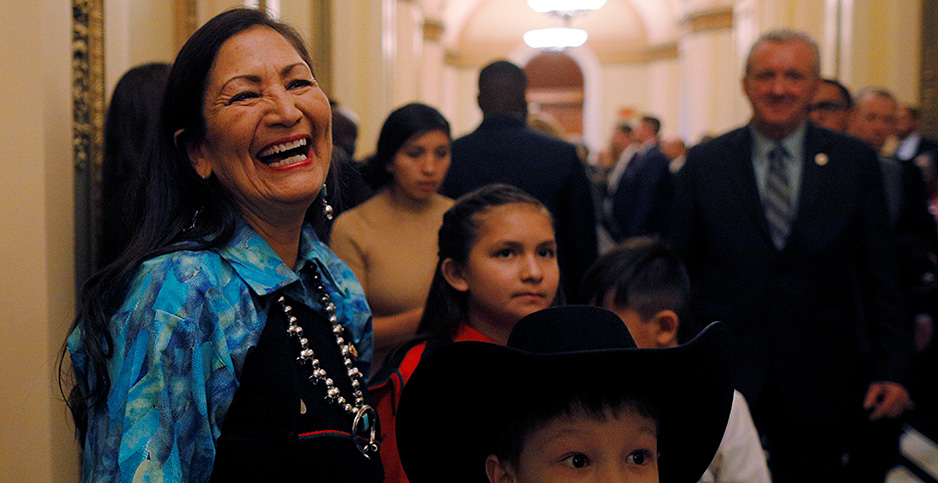 Rep. Deb Haaland (D-N.M.) at the Capitol on Jan. 3, 2019, after she became one of the first two Native American women in the House. She now could become the first Native American to serve as Interior secretary. Brian Snyder/Reuters/Newscom

With Democratic New Mexico Rep. Deb Haaland poised to become the first Native American Interior secretary, tribal governments historically marginalized by the agency expect not only a greater respect for their autonomy, but also a more significant role in the nation’s land and water management decisions.

Tribes aren’t a monolith, frequently pushing different — and sometimes competing — agendas. But tribal leaders and experts have identified common issues they expect Haaland to act on quickly if confirmed, including an overarching need for better consultation and recognition of tribal sovereignty across Interior’s wide authority over lands and waters.

"There’s been a lot of neglect" of tribal programs, said Raina Thiele, an Obama administration official. "Haaland coming in as secretary begins to right the ship in terms of balance of focus of the department."

At Interior, the top job has been typically held by "a series of folks who are either experts in environmental issues and conservation issues or folks who are experts and really care deeply about fossil fuels, extractive industry, depending on which party is in power," said Thiele, an Alaska Native.

"That is what has led to this neglect to this very core part of what the Department of Interior is," she added.

University of Colorado law professor Sarah Krakoff, who is known for her work in Native American and environmental justice issues, said she expects Haaland, a member of the Pueblo of Laguna in New Mexico, to deploy innovative options for tribal consultation, including co-management of some public lands.

"I think some of the things we can anticipate include a robust approach to gathering tribal nations’ feedback and views and thoughts about projects that are not only on tribal lands but that affect tribal sacred sites and tribal natural resources," Krakoff said.

Interior’s Bureau of Indian Affairs oversees more than 56 million acres of land in trust for both tribes and individuals. Those lands include 326 sites, known as reservations, pueblos and rancherias, among other monikers. The Navajo Nation’s reservation marks the largest unit, at about 16 million acres.

But other lands, like the Bears Ears National Monument, where multiple tribes claim important spiritual and cultural ties, are managed by other divisions of the Interior Department, including the Bureau of Land Management.

"It is an opportunity to start fresh because it seems like this administration understands the equal value and the complementary value of respecting tribal sovereignty and self-determination," Krakoff added. "Many tribal nations want more influence because they have long histories of being good stewards of their lands."

Interior’s Bureau of Indian Affairs, for example, was originally housed in the Department of War, and Indigenous communities were frequently considered wards of the state.

That colonization "has exploited resources, exploited labor, disenfranchised Indigenous and Black communities of color," she said.

Haaland, Bernal added, "is assuming a federal agency that has a really, for lack of a better term, shitty legacy."

Haaland’s own agenda will likely look to shore up the consultation process with tribes before undertaking federal actions on tribal lands or waters.

During the Trump administration, many tribes felt ignored, said Shannon Wheeler, the chairman of the Nez Perce Tribe in the Pacific Northwest. That consultation process is required under federal treaties, but often, it is perfunctory, he said.

"Consultation with federal agencies is honored and at the highest level, and it’s not just a check-the-box process," Wheeler said. "Under the former administration, it seemed to be that."

The consultation requirement applies to a broad range of activities that would be within Haaland’s purview at Interior, from oil and gas leasing and permitting to public lands management and endangered species mitigation.

A recent report from the liberal Center for American Progress said the government has "largely failed" to manage public lands in a manner consistent with its tribal treaty obligations, calling most consultations "feeble."

"We want those consultations to be meaningful to put treaty rights and inherent rights where they should be," Wheeler said. "That federal agencies take that trust responsibility seriously."

The tribes have some reason for optimism. In addition to the recent executive order, Biden issued a plan on the campaign trail that pledged to "provide tribes with a greater role in the care and management of public land that are of cultural significance to Tribal Nations."

While Haaland awaits a date for her own confirmation hearings, the Biden administration is also moving ahead with key Interior hires, including Natalie Landreth as deputy solicitor for land. Landreth, a citizen of the Chickasaw Nation of Oklahoma, joins the agency from the Native American Rights Fund, where she spent 17 years (Greenwire, Feb. 3).

"I’m optimistic based upon the campaign promises that [Biden] made to the tribes, just hoping for the best," NARF Executive Director John Echohawk told E&E News before Landreth’s new post was announced.

Haaland’s nomination has signaled to tribes and experts that the administration will make a more concerted effort to involve tribes, including in conservation efforts.

"This is a clear and positive sign," CAP’s Sahir Doshi wrote, "that the next administration and its congressional allies understand that any conservation goal lives and dies on the basis of support from tribal nations."

Several tribal advocates said Biden’s embrace of the "30×30" initiative — an aggressive conservation goal aimed at permanently protecting at least 30% of the nation’s undeveloped land and waters by 2030 — could be a showcase for collaboration between Native American governments and the executive branch.

Forsman, whose tribe is based in Washington state, said there are no specific plans on how to coordinate with the Biden administration on its nascent 30×30 initiative, but that many existing projects could be brought under that umbrella.

"It’s more of a philosophy right now," Forsman acknowledged, then pointed to the Kitsap Forest and Bay Project, in which local officials, the Suquamish Tribe and the Port Gamble S’Klallam Tribe purchased timberland from Pope Resources for conservation. "We’re always looking for opportunities to preserve open space and habitat," he said.

Thiele, the former Obama administration aide, added that Haaland has an opportunity to show tribes that the 30×30 initiative can serve their interests and not merely be a heavy-handed conservation program.

"In the past, there has been some tension between traditional Western conservation interests and Indigenous people, not just in this country but globally," Thiele said, pointing to the removal or exclusion of Native American tribes in the creation of national landmarks like Yosemite National Park, Glacier National Park and Yellowstone National Park. Historian Mark David Spence details those moves in his book, "Dispossessing the Wilderness: Indian Removal and the Making of the National Parks."

Instead, Thiele said, the new conservation goal could be used as a tool to improve collaboration or shape new co-management arrangements.

"Tribal co-management agreements with the government have been imperfect, but this is an opportunity within the 30×30 framework to really strengthen them," she added.

Haaland was a lead sponsor of legislation to establish that goal last year, and that bill included an emphasis on Indigenous-led conservation efforts, as well as respect for tribal sovereignty.

Further, there is growing scientific evidence internationally that Indigenous conservation measures are particularly effective. The CAP report pointed to studies in Canada, Brazil, Australia and Namibia that have found greater biodiversity among Indigenous-managed lands compared with those managed by regulatory agencies (Greenwire, Feb. 2).

CAP recommended that the administration make tribal co-management on public lands a priority.

The National Congress of American Indians likewise made improved co-management of federal lands a top priority for the new administration.

"The Administration should improve, streamline, and encourage tribal co-management of federal lands for the purposes of natural resource management and protection and access to sacred places," NCAI asserted in its 133-page transition plan, approved in November. "In so doing, the Administration would recognize the importance of these lands and places to Native peoples while increasing their protection, and improving management strategies, and expanding access to them for tribal citizens."

"She is going to have the ability to understand some of the Indigenous politics better than someone who didn’t have prior experience working with tribal governments," Larson said.

For example, Larson noted that in Alaska, Indigenous politics are marked by a tension between tribal corporations, which focus on raising revenue, and traditional tribal governments, which are more focused on protecting natural resources.

Another area in which Haaland may be able to make strides is addressing the fragmented regulatory regime tribes must navigate within the Interior Department.

Tribes frequently have to split their resources and energy among a variety of Interior offices when they are dealing with a single issue that spans overlapping bureaus, such as managing waterways for endangered salmon runs.

"If tribes are having to engage in separate negotiation processes with each agency, it’s tremendously taxing," said Laura Evans, a University of Washington public policy professor who has studied tribal relationships with state and federal governments.

Some of that may be addressed by the White House Council on Native American Affairs, Wheeler said, noting that he is "looking forward" to the "revitalization" of that entity.

Despite early indications that the Biden administration is focused on addressing these issues — including with Haaland’s nomination — Indigenous communities are closely watching to see if the administration will make good on its promises.

For her, it doesn’t break much new ground, echoing an earlier order from the Clinton administration that was reaffirmed in another order under Obama.

"Why are we backtracking to an E.O. that is no longer relevant now?" she asked. "It’s just backward."