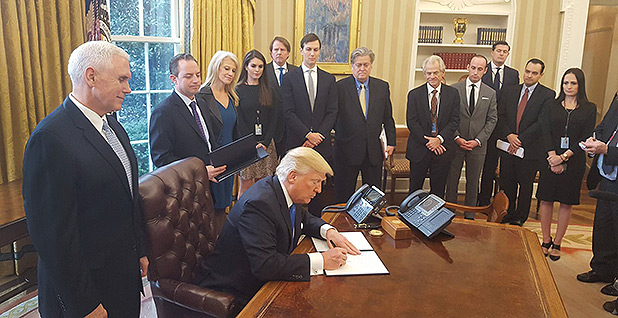 President Trump's top accomplishments during his first 100 days in office have been through executive orders or congressional resolutions of disapproval killing Obama-era rules. Photo by the White House, courtesy of Wikipedia.

Third part of a series.

Almost 100 days in office and President Trump has taken a number of steps to make good on his promise to roll back regulations that conservatives say are choking the American economy.

Trump has issued a number of executive orders prompting federal agencies to limit regulatory actions and focus more on deregulation. And he’s deployed the formerly rare Congressional Review Act to overturn a dozen Obama-era rules, many of which were intended to protect the environment and make energy production cleaner.

Though Trump’s deregulatory agenda is clear, the question is whether the measures will have a lasting impact, experts say.

"Hard to tell what these [deregulatory efforts] will amount to," H.W. Brands, a historian at the University of Texas, Austin, wrote in an email.

Still, deregulating the energy sector is one area where Trump has been very "consistent" and "clear-eyed," according to Meg Jacobs, energy policy expert at Princeton University’s Woodrow Wilson School.

"He hopes to undo a lot of the regulatory rules under President Obama, like scaling back the Clean Power Plan; and if not to do away with it, then to gut it from the inside," she said.

The trouble with executive orders, Jacobs pointed out, is they can easily be reversed by subsequent administrations.

James Goodwin, senior policy analyst with the Center for Progressive Reform, said the first 100 days has seemed to him more like an extension of Trump’s campaign trail rhetoric.

"Attacking regulations, attacking safeguards, attacking agencies, attacking the process by which safeguards are enforced and implemented," he said. "Underlying all that campaign rhetoric is the challenge they’re facing in coming to grips with translating that rhetoric into action and quickly finding these issues are not as simple as a tweet or stump speech."

He added: "The first 100 days have been a slow coming to grips with a big dose of reality in trying to translate their ideas about the regulatory system into actionable policy, and it’s going to be a rude awakening over the several months."

For example, Trump’s executive order requiring agencies to toss at least two rules for every new one could spur a number of lawsuits.

"All regulations have to surmount cost-benefit analysis and found to not be arbitrary and capricious," Buzbee said. "The courts may be very skeptical of such regulatory reversals."

The process to repeal rules can take years, as it requires a full notice and comment process. Agency heads are required to put forth strong evidence that a rule should be repealed, which means making a compelling argument rooted in science and facts, he said.

"Agencies are going to find themselves in a very tough position because they don’t want to go to court and be rejected, and on the other hand the president has asked these political appointees to take actions that are vulnerable to challenge," Buzbee said.

"This will set in motion big heated regulatory battles."

Trump has been criticized for not passing any major legislation in his first 100 days. But the White House is stressing the passage of Congressional Review Act resolutions as a major legislative accomplishment (Greenwire, April 5).

"When you — and I’ve noted before to you that only one had ever seen signed in history before — that’s a pretty significant achievement for this president."

Jerry Ellig, a senior research fellow with the Mercatus Center at George Mason University, praised Trump’s use of the CRA and his regulatory executive orders but questioned the extent of their impact.

"On the other hand, these aren’t the things that really fundamentally change the way the regulatory system works, that would require changes to the Administrative Procedure Act," he said.

"The people who love these developments and the people who hate them should both keep things in perspective."

Ellig said he judges a presidential action as significant or important if it affects the entire regulatory system rather than a few regulations and whether the action will last.

"The administration has the opportunity for a much greater accomplishment if senators can agree on some type of a compromise on regulatory reform," he said.

While changes to the regulatory process are a top priority for many Republican lawmakers like Sens. James Lankford of Oklahoma and Rob Portman of Ohio, fewer Democrats focus on the issue — though moderate Sens. Heidi Heitkamp (D-N.D.) and Claire McCaskill (D-Mo.) are working to find a compromise (Greenwire, Feb. 21).

Ellig said the president who likely did the most to change the regulatory system in his first 100 days was Ronald Reagan.

"He required agencies to conduct regulatory impact analysis, analyze problems they’re trying to solve, and look at the costs and benefits of alternatives," he said. "And that approach has been durable as evidenced by the fact that it was largely kept in place by Clinton."

Ellig called Trump’s two-for-one order a "heck of a surprise." He said if it withstands the test of time, it would be "quite an accomplishment."

Patrick Maney, a professor of history at Boston College, said Trump has used executive orders to attempt to change the regulatory process more than many previous presidents. But he suggested Trump’s executive orders pale in comparison to many of his predecessors’.