Trump could tamp down the Bundys 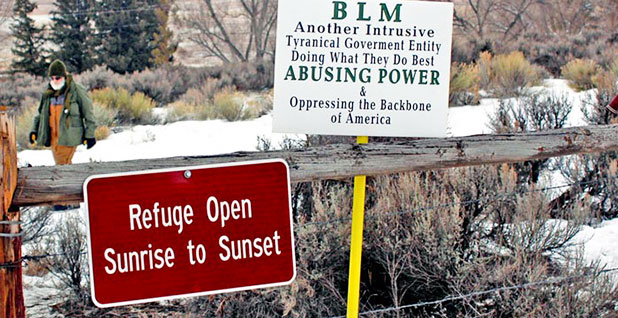 Critics of the armed standoff at the Malheur National Wildlife Refuge last winter say Republican Donald Trump’s election this week could unexpectedly quell the militant anti-public-lands movement behind the occupation.

A leader of the movement — Nevada rancher Cliven Bundy, who is currently in jail awaiting trial for the 2014 armed standoff at his ranch — told his supporters to vote for Trump. And the Republican nominee has previously made statements praising Bundy.

That has led some to speculate that the extremists, who protest federal management of public lands, may at least temporarily be less likely to engage in new armed confrontations than they would have been if Democrat Hillary Clinton had won the presidency.

"The anger that the Malheur occupiers — the Bundy supporters — feel may well be temporarily dampened or reduced by a Trump presidency," said Steve Wax of the Oregon Innocence Project, who worked as a federal public defender for 30 years.

"They may well feel, at least in the short term, that someone who understands or at least portrays himself as an outsider will be more sympathetic to their cause."

There is both statistical and historical support for that theory.

In testimony to Congress in June, the Southern Poverty Law Center chronicled the rise of far-right anti-government groups during Barack Obama’s presidency. When Obama took office, they found 149 such groups. By this year, there were 998.

Another public lands movement, the Sagebrush Rebellion, sprouted up partly in response to Democratic President Carter’s environmental rules and lands management in the 1970s.

But when the country in 1980 elected President Reagan, a Western Republican with a cowboy image, the rebellion largely died down. (A smaller sagebrush rebellion later returned during President Clinton’s administration.)

"There is a precedent for having these movements at least be suspended if not disbanded," said Michael Blumm, a Lewis & Clark Law professor who has written about public lands issues.

Trump’s election, Blumm said, could signal to the Bundys and their supporters that the country is not stacked against them.

"You could draw a silver lining in the sense that they seem to have won at the ballot box," he added. "This ‘rigged’ election turned out not to have been rigged. So the protests, like what we saw at Malheur, may not be necessary."

"Think about the ranchers in the West who are getting harassed by the Interior Department or the laid-off timber workers," he said. "There is relief coming. This is good for our country."

‘We have to be great stewards’

It is unclear, however, just how sympathetic Trump will be to the anti-public-lands movement.

The president-elect has made several statements about the Bundys.

During the 2014 standoff at the Bundy ranch, Trump said of Cliven Bundy on Fox News: "I like him, I like his spirit, his spunk."

He said Bundy "ought to go out and cut a great deal."

Further, a co-chairman of the New Hampshire Veterans for Trump coalition, Gerald DeLemus, faces charges over his role in the Nevada standoff and visited Malheur during the occupation last winter.

In January, he told Field & Stream magazine that he opposed the growing movement to transfer federal lands to states, which many in the Bundy camp support.

As a New York real estate mogul, Trump also has strongly supported eminent domain, a government practice that is anathema to Bundy and his supporters (E&E Daily, Feb. 8).

Aaron Weiss of the Center for Western Priorities, which opposes the Bundys’ efforts, cautioned that the effect of a Trump presidency on the movement is hard to predict.

"Whether it encourages or dampens, we don’t know yet," he said. "We do know that some of these militants were Trump supporters during the campaign. But it is not at all clear whether Trump himself is a sympathizer to them or their cause."

Weiss noted that his group would welcome anything to subdue the Bundys, who appeared emboldened by their surprise acquittals in the Oregon standoff case less than two weeks ago (Greenwire, Oct. 28).

After the verdict, Ammon Bundy told The Oregonian that "we will continue to stand."

"It was our duty to stand. We did it peacefully. We did it legally, and the jury’s verdicts confirmed that," he said.

In hindsight, several observers said the verdicts were a bellwether of the strength of the anti-government sentiment that Trump capitalized on to win the White House.

"Not to condemn the jury, but I think they were extremely skeptical of what the government, through the [assistant] U.S. attorneys, had to say," said Tung Yin, a Lewis & Clark Law professor who closely followed the trial.

"[I] wouldn’t be surprised if the majority of the folks in the jury voted for the president-elect," he said.

During the 41-day Oregon standoff that ended Feb. 11, Trump explicitly said Ammon Bundy and his supporters should stand down.

And he reiterated a central theme of this candidacy.

"You have to maintain law and order, no matter what," Trump told The Hill in January.

Indeed, some speculated that a Trump administration could be more heavy-handed in its treatment of Bundy and his supporters than the current administration.

The Obama administration was sharply criticized for largely capitulating to the Bundys at the 2014 standoff out of concerns for safety. And some observers have raised questions since last month’s acquittals about the government’s handling of the Oregon occupation (Greenwire, Nov. 1).

"How is he going to handle people like the Bundys who owe the government money, refuse to pay and use force?" said Wax of the Oregon Innocence Project.

During George W. Bush’s presidency, he said, the Interior Department cracked down on ranchers.

"There was very little tolerance within the Department of the Interior for grazing trespassing on public lands," said Abbey, who worked for BLM during that time.

David Jenkins of Conservatives for Responsible Stewardship was less optimistic that Trump’s victory would have much of an effect on the anti-government movement.

"They don’t seem to respect the federal government regardless of who is in power," Jenkins said.

Trump won’t have long to decide how to address the issue. The Bundys and more than a dozen others are set to face trial in February over a slew of charges stemming from the 2014 Nevada standoff, and the new administration could exert its influence on how the U.S. attorney in Nevada moves forward with the case.

"At some point, President Trump will face a decision — whether he chooses to be a law-and-order president, or will he side with the militants that threaten our park rangers and police officers?" said Weiss of the Center for Western Priorities. "I suspect that will be a moment of truth for the Trump presidency."