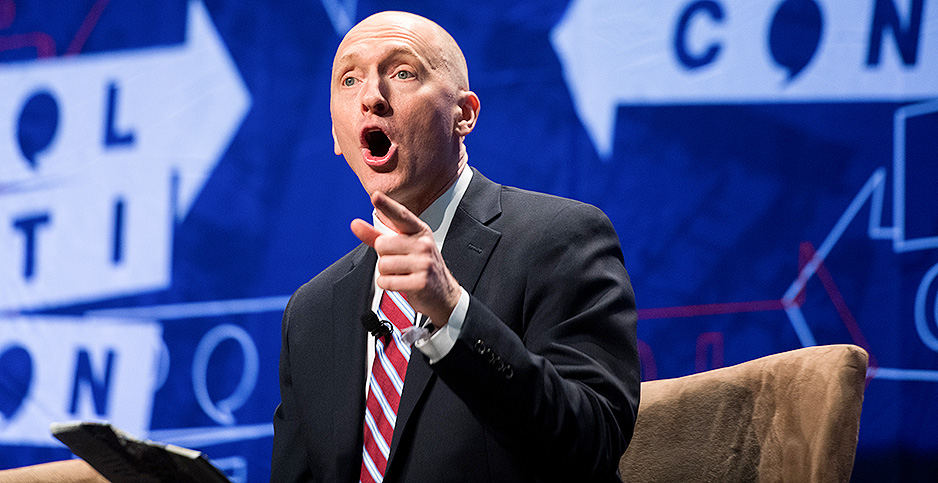 When President Trump’s campaign was criticized for its lack of serious policy ideas in the winter of 2016, officials brought in energy advisers with ties to Russia.

Those ties included one adviser who had worked with Russian intelligence officials and another whose interactions with foreign governments and claims about Hillary Clinton’s emails eventually kick-started an FBI investigation, according to special counsel Robert Mueller’s report looking into Russian interference in the 2016 election.

Starting in January 2016, Carter Page told top campaign officials that he had repeated contacts with Russian officials with close ties to the Kremlin, the report states. Page had been put in touch with the campaign by Ed Cox, chairman of the New York State Republican Party. By March 2016, Page had been officially named as foreign policy adviser on Russia and energy issues, according to the redacted Mueller report released yesterday by the Department of Justice.

The Mueller report shows that Page helped Trump craft one of his first major energy policy speeches. In May 2016, Page prepared the outline for the speech Trump delivered that month in Bismarck, N.D., one of the country’s hubs for fracking. It was in that speech that Trump promised to "cancel the Paris climate agreement" and to roll back President Obama’s signature climate policy. He called Obama’s priority on climate science "phony."

"We’re going to deal with real environmental challenges, not the phony ones we’ve been hearing about," Trump said at the rally.

The report shows that senior Trump campaign advisers, including Sam Clovis, were enthusiastic about Page’s work on that speech.

"I’ve yet to meet some of these people, and I was the campaign manager. I never met Carter Page. I don’t think I’ve met George Papadopoulos," she said.

Before his connection to the campaign, Page had been recruited by Russian intelligence as a foreign source, the report states.

Page had experience on energy issues in Russia and started an energy investment firm, Global Energy Capital LLC, there in 2008. As the company struggled financially, Page reached out to the chief financial officer of Gazprom for assistance, the report states.

Page was integral to the campaign’s energy policy at the time Trump was locking down the Republican Party nomination. As the campaign received criticism in the media for not putting forth serious policy ideas, it sought experts in a number of subject areas.

Page told investigators that when he traveled to Russia in July 2016 for a speech at the New Economic School in Moscow, he talked with numerous officials about gaining a stake in Russian oil companies. The report shows Page tried to leverage his work on the campaign into lucrative deals with the Russian energy companies. He acknowledged to the special counsel’s office that he talked about the "possibility of a sale of a stake in Rosneft in passing." Rosneft is a Russian state-owned energy and oil company.

Page also met with individuals from Tatneft, a Russian energy company, to discuss possible business deals, including having Page work as a consultant, the report states.

Investigators concluded that Russian officials tried to coordinate with Page because of his position on the Trump campaign. However, they concluded that "the investigation did not establish that Page coordinated with the Russian government in its efforts to interfere with the 2016 presidential election."

At the same time that the campaign began working with Page, it also began a working relationship with Papadopoulos, who offered insights into energy issues. Papadopoulos was brought into the campaign by Clovis, the campaign’s national co-chairman and chief policy adviser.

"Clovis performed a Google search on Papadopoulos, learned that he had worked at the Hudson Institute, and believed that he had credibility on energy issues," the report states.

In one of their first conversations, Clovis told Papadopoulos that Russia policy would be an important focus for the campaign, the report states.

Within the month, Trump publicly named Papadopoulos to his foreign policy and national security advisory team, which was chaired by then Sen. Jeff Sessions, who later became U.S. attorney general. At a meeting at Trump International Hotel Washington, D.C., that was intended to generate press coverage, Trump said Papadopoulos was an oil and energy consultant. At that meeting, "Papadopoulos told the group that he had learned through his contacts in London that Putin wanted to meet with candidate Trump and that these connections could help arrange that meeting."

By May 2016, Papadopoulos told a foreign government official that he believed Russia had dirt on Clinton. That government later contacted the FBI, which then started its investigation into the Trump campaign’s collusion with Russia, the report states.

"Papadopoulos had suggested to a representative of that foreign government that the Trump Campaign had received indications from the Russian government that it could assist the Campaign through the anonymous release of information damaging to Democratic presidential candidate Hillary Clinton," Mueller’s investigators wrote. "That information prompted the FBI on July 31, 2016, to open an investigation into whether individuals associated with the Trump Campaign were coordinating with the Russian government in its interference activities."

The report also shows that Russia conducted an extensive social media campaign to boost Trump’s presidency and that it occasionally used energy issues to encourage rallies. One example cited in the report features a poster for a 2016 event in Pennsylvania that depicts a forlorn miner.

"Miners for Trump, bring back our jobs; how many PA workers lost their jobs due to Obama’s destructive policies?" it states.

The rallies varied in success, but Russia’s Internet Research Agency continued to try to encourage them even after Trump’s election victory, the report states. The Russian group used Facebook and other social media outlets to rally the president’s supporters, efforts that are likely still ongoing.

"The IRA continued to organize rallies even after the 2016 U.S. presidential election," the report states. "The attendance at rallies varied. Some rallies appear to have drawn few (if any) participants while others drew hundreds."

That follows two reports from the Senate Intelligence Committee released late last year. The reports found that a Russian social media campaign promoted third-party candidates who ran for office to "save the planet" and blasted out memes that mocked oil companies as part of a misinformation effort to help Trump in the presidential election.