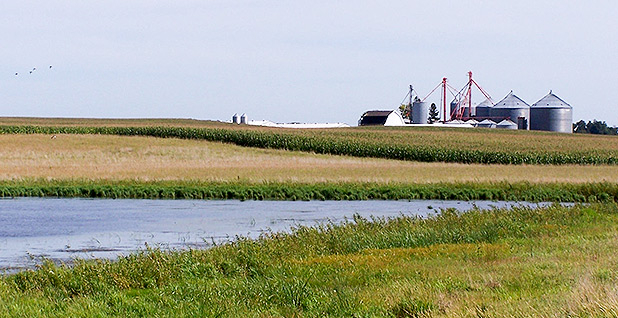 U.S. EPA briefed state and local officials yesterday on how it plans to repeal and replace the Obama administration’s Clean Water Rule, which is fiercely opposed by agribusiness groups as regulatory overreach. Photo by Mark Vandever /USGS, courtesy of Flickr.

The Trump administration laid out its vision yesterday for lining up federal Clean Water Act oversight with the views expressed by the late Supreme Court Justice Antonin Scalia.

Meeting with state and local officials in Washington, U.S. EPA used a slideshow to outline plans for rolling back and replacing the Obama administration’s Clean Water Rule — also known as Waters of the U.S., or WOTUS — that aims to clarify what waterways and wetlands get automatic federal protection.

As amended in 1972, the Clean Water Act vaguely asserts federal jurisdiction over "traditionally navigable waters of the United States" without providing any further detail, leaving regulators struggling over decades to define the law’s scope over isolated or ephemeral streams, bogs, or other seasonally flooded areas.

The Trump administration’s slideshow, which was obtained by E&E News, points to how it might write a definition of protected waters that would be in line with Scalia’s opinion in the 2006 Rapanos v. United States case. He wrote that federal protection only extends to "relatively permanent" waters and wetlands with a continuous surface connection to larger rivers and streams.

EPA — which partners with the Army Corps of Engineers on WOTUS oversight — is considering three "approaches" to defining "relatively permanent" waters:

In explaining the third option, the slideshow notes, "Current practice considers directly abutting wetlands and those with a continuous surface connection, regardless of distance, to be jurisdictional."

The scope of wetlands that would get protection, the slides say, would ultimately depend on which streams and tributaries the administration opts to protect.

EPA spokeswoman Liz Bowman described the meeting as "an opportunity for EPA to hear from stakeholders early in the process."

"We are encouraged by the wide-ranging feedback we received and look forward to working with these and other partners moving forward as we seek to define ‘waters of the U.S.’ in a way that strikes the proper balance among local, state and federal protections for the environment and the communities that rely on these waters," she said.

The administration’s move to write a new regulation comes following a February executive order from President Trump directing the agencies to consider redefining "waters of the U.S." to be "consistent with" Scalia’s Rapanos opinion (Greenwire, Feb. 27).

EPA is open to alternative interpretations of Scalia’s opinion. Its question for officials at the intergovernmental gathering: "How would you like to see the agencies interpret ‘consistent with’ Scalia?"

The Trump administration’s approach is a significant departure from how both the Obama and George W. Bush administrations defined "waters of the United States."

Rapanos was a famously messy case that ended in a 4-1-4 split decision. At issue was Michigan landowner John Rapanos’ bid to develop a property that was designated a wetland, with EPA seeking to bring civil and criminal enforcement actions because he didn’t have a permit.

Scalia, who found in Rapanos’ favor, argued for a more restrictive view of federal jurisdiction for himself and the three other conservatives, Chief Justice John Roberts and Justices Clarence Thomas and Samuel Alito. The four liberal justices argued for a far more expansive vision.

Justice Anthony Kennedy wrote a stand-alone opinion agreeing with the conservatives that Rapanos was in the right, but disagreeing with them about the scope of the Clean Water Act. He stated that waters must have a "significant nexus" to navigable rivers and seas, which could include not just surface connections but also biological or chemical ones.

The Obama and Bush administrations followed Kennedy’s "significant nexus" test in writing guidance and rulemakings on the reach of the Clean Water Act.

A new definition of "waters of the U.S." from the Trump agencies would only come after the administration conducts a separate rulemaking process to repeal the contested Obama administration regulation.

That regulation is currently stayed by the 6th U.S. Circuit Court of Appeals while it is being litigated.

The EPA slideshow explains that the administration intends to repeal WOTUS in an earlier rulemaking in order to ensure that the regulation does not come back into effect if the Supreme Court rules that lawsuits against the rule should proceed in district court instead of circuit court (Greenwire, April 14).

"While the 6th Circuit stay may remain in effect for some time, its duration is uncertain," the slideshow says.

To that end, EPA intends to revert to a 1986 definition and would also rely on a 2008 guidance from the Bush administration about how to apply that definition while the Trump administration works on its own Scalia-based regulation.

"In the Step 1 proposed rule, the agencies will define ‘waters of the United States’ using the regulatory definition in place before the Clean Water Rule, which the agencies will continue to implement according to longstanding practice, just as they are today," the slideshow says.

Alexandra Dunn of the Environmental Council of the States (ECOS) said many officials at the meeting stressed the "importance of clarity" in a new regulation.

The administration’s two-step process for repealing and replacing the regulation was, in part, she said, an attempt by the administration to provide that certainty by reverting to the 1986 regulation between when WOTUS is replaced and a new definition is proposed.

Everyone in the room, she said, seemed comforted that the Trump administration seem to understand that the task of defining which waters are covered by the Clean Water Act "has not become any easier since the last administration."

"Figuring out where the line is drawn is going to be complicated by factors like geography, perennial and seasonal flows, and many others, just as it was for the previous administration," she said.