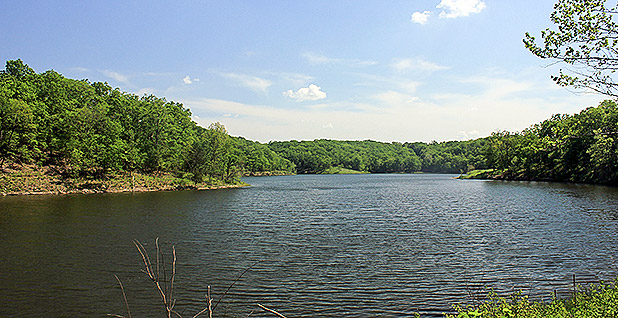 It’s a different story under the Trump administration.

EPA itself is now proposing a strikingly similar water quality standard to one the Obama-led agency found lacking.

EPA included the Missouri standards last week as one of two options the agency itself is proposing. EPA wrote one of the options itself, while simultaneously proposing another it acknowledges is "essentially identical" to the Missouri proposal.

An EPA spokeswoman said the agency "included two approaches for establishing federal water quality criteria for nutrients in its proposal in order to solicit feedback from the public on both approaches."

But environmentalists and water quality experts are questioning what they see as an about-face.

"It is a bit odd that EPA would take the same approach the state is taking when 18 months prior EPA had said the approach isn’t going to work and we have significant concerns," said Peter Goode, an environmental engineer and lecturer at Washington University School of Law in St. Louis.

And the concerns the Obama EPA raised last year were not insignificant.

In a letter to the Missouri Department of Natural Resources, EPA Region 7 water and pesticides director Karen Flournoy wrote, "EPA is concerned that the department’s proposed chlorophyll-a criteria and impairment screening thresholds may not be scientifically defensible and protective of the designated uses of surface water, as required by federal law."

The EPA proposal released last week is the latest installment in an eight-year effort to set standards for the nutrients nitrogen and phosphorus and chlorophyll-a in Missouri lakes. Overdoes of those nutrients that wash off farms, lawns and streets fuel algal blooms that deplete dissolved oxygen needed by aquatic life. Chlorophyll-a is an early-forming byproduct of nutrient pollution.

Missouri currently has what’s called "narrative" water quality standards for its lakes describing that waters should be pollution-free.

In 2009, Missouri made its first effort to set numeric standards for nitrogen, phosphorus and chlorophyll-a. But EPA rejected most of that proposal, concluding the state had failed to demonstrate their standards would make water safe for recreation and drinking.

Missouri was supposed to have just 60 days to come back to EPA with another plan before the agency would have to propose federal standards. Both state and federal officials failed to meet the deadline, spurring a 2016 lawsuit by the Missouri Coalition for the Environment.

EPA and Missouri are bound by a settlement requiring EPA to propose water quality standards for Missouri lakes by last Friday, Dec. 15. The standards must be finalized by Dec. 15, 2018, unless the state DNR proposes new standards that EPA approves before that deadline.

Missouri has been working on its standards since 2015 and is just weeks away from officially proposing them to EPA.

Flournoy’s critical 2016 letter slammed an earlier version of standards the state is now close to approving, with a state Clean Water Commission vote set for Jan. 4.

The standards set "screening values" for nitrogen, phosphorus and chlorophyll-a. But the state would not immediately be required to act if tests showed elevated levels of the nutrients in lakes.

Instead, the state would first look for evidence of harms that can be caused by nutrient pollution, including fish kills, toxic bacteria and shifts in aquatic diversity.

Flournoy’s 2016 letter criticized that approach, saying it "appears to offer no protection beyond that provided under the state’s long-standing general [narrative] water quality criteria."

"The MDNR has also acknowledged that terms such as ‘fish kill’ and ‘harmful algal bloom’ are qualitative constructs subject to differing interpretations," she wrote. "Is the MDNR planning to define these terms in conjunction with the upcoming rulemaking?"

But Missouri’s final proposal closely resembles the one it drafted in 2015.

The biggest change: While DNR was initially planning to set water standards to be protective of aquatic life and drinking water, the state now says its standards only aim to protect aquatic life — with particular attention to its bass fishery.

The "screening values" Flournoy criticized are still in the proposal.

John Hoke, chief of watershed protection at DNR, defended the proposal in an email, saying the department "worked extensively with agricultural, industry, and municipal leaders to develop numeric nutrient criteria that address EPA’s concerns, yet are appropriate for Missouri’s lake ecosystems."

"The department strongly believes its proposal responds to the agency’s disapproval and previous concerns by providing a nutrient criteria framework that is scientifically rigorous, reproducible, and connected to the aquatic life protection designated use," he wrote.

Missouri environmentalists say that proposal is flawed. In addition to criticizing DNR for not immediately declaring a lake impaired once elevated levels of chlorophyll-a, nitrogen or phosphorus are detected, they also note that the department would only wait one year to see whether there’s other evidence of pollution — fish kills, low dissolved oxygen levels and harmful algal blooms — in a lake.

That’s a problem, they say, because byproducts of pollution can take years to develop after high nutrient levels become present in a lake.

The environmental engineer, Goode, a member of the Missouri Coalition for the Environment, said the proposal would put a large and unrealistic strain on DNR to continuously monitor all lakes and reservoirs.

"One of the requirements is that there are shifts in aquatic diversity caused by the elevated levels," he said. "But to know if there are shifts, you have to be continuously conducting regular surveys of aquatic life in all your lakes. That’s not something they are likely to assess on a regular basis."

Goode said he would prefer that Missouri jettison the "screening values" and "set a number."

"If the data show you are above that number, you shouldn’t be in compliance," he said.

EPA is proposing two alternatives for water standards in Missouri lakes. One, the agency acknowledges, is "essentially identical" to what Missouri had proposed.

EPA, agency officials wrote, "has not separately prepared supporting documentation" for the proposal because it "is intended to closely mirror the state’s 2017 proposed rule."

The agency does acknowledge the potentially awkward timing of its proposing a standard that it may soon be asked by Missouri to approve.

"As of the date of this proposal, Missouri has not finalized, and EPA has not made any determination with respect to, Missouri’s proposed standards," EPA wrote.

"Notwithstanding this, EPA believes it is appropriate to propose standards for consideration that are essentially identical to the proposed state standards, and is doing so in Alternative 2."

The other alternative proposed by EPA is one the agency has been working on since 2016, said Betsy Southerland, a former EPA Office of Water official who worked on that plan.

That proposal would still use "screening values" for nitrogen and phosphorus. But the proposal would use a "protection value" for chlorophyll-a, meaning a water body would automatically be considered impaired if levels are elevated, without any need for assessing additional signs of pollution.

"The EPA alternative is what has been for years and years highly recommended and very well peer-reviewed by all kinds of scientific experts," Southerland said, adding the Missouri proposal also being considered by EPA "is not scientifically defensible."

Alicia Lloyd, water policy coordinator for the group, said she fears the inclusion means EPA would approve Missouri’s proposal if the Clean Water Commission votes to advance it next month.

"It is an absolute signal to DNR to go ahead with their proposal, because EPA is now also proposing it," she said. "The previous administration questioned the scientific basis of [the Missouri] proposal, and then one year later, all of a sudden EPA is proposing it themselves. It is very concerning."