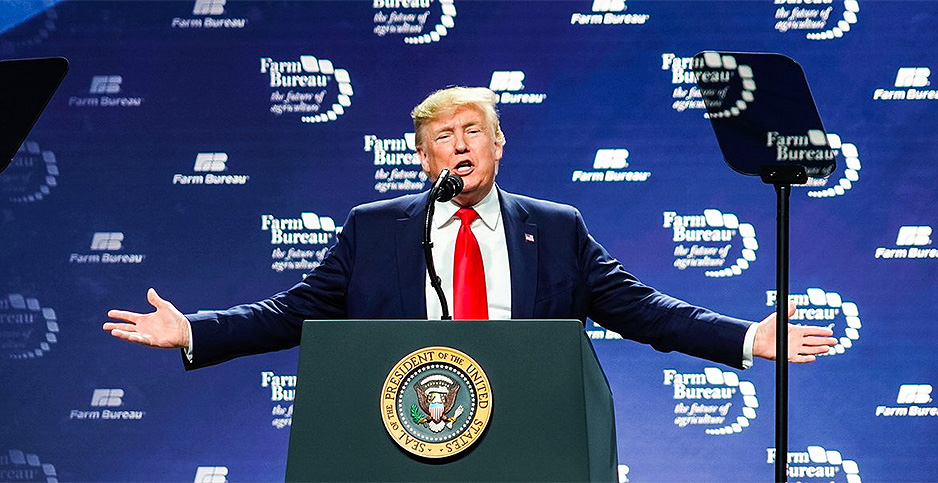 President Trump yesterday touted his repeal of key Clean Water Act regulations as more than three dozen current and former government officials called for an investigation into the scientific basis of his forthcoming replacement rule.

Trump told a gathering of the country’s farmers that last fall he repealed "one of the most ridiculous regulations of all," the Obama administration’s Waters of the U.S., or WOTUS, rule, which defined which marshes, creeks and streams quality for federal protections.

"That was a rule that basically took your property away from you," he said at the American Farm Bureau Federation’s annual meeting in Austin, Texas.

The Obama-era rule was meant to clarify which water bodies are and aren’t covered by the federal law.

In addition to repealing the regulation, Trump has proposed his own definition, due to be finalized soon.

Trump’s proposal would drastically cut back the Clean Water Act’s reach. More than half the country’s wetlands would no longer qualify for federal protections under the December 2018 proposal, a rollback of some regulations that predated the Obama administration rule (Greenwire, Dec. 11, 2018).

The regulations, however, have come under scrutiny from EPA’s scientific advisers and other government officials.

Public Employees for Environmental Responsibility yesterday formally called for an investigation into the rulemaking process, charging that it was based more on politics than on science.

The PEER complaint, filed to the EPA Office of Inspector General, alleges that EPA Administrator Andrew Wheeler and other agency officials acted to prevent EPA’s best science from guiding the rule.

"The writing of the final Rule was controlled solely by [EPA] Headquarters political appointees," the complaint states. "The final Rule contradicts the overwhelming scientific consensus on the connectivity of wetlands and waters, and the impacts that ephemeral streams and so-called ‘geographically isolated’ wetlands have on downstream navigable waters."

The complaint was signed by 44 former and current employees, including three former EPA regional administrators.

It also alleges that officials instructed staff to not submit comments for the administrative record and publicly mischaracterized scientific findings. Specifically, the complaint is asking the IG to investigate whether the rule violated EPA’s Scientific Integrity Policy.

EPA’s rulemaking process has also come under fire from members of an EPA advisory board.

In a draft report released late last month, a Science Advisory Board work group concluded that the proposed rule departs from "EPA recognized science" and threatened "to weaken protection of the nation’s waters" (Greenwire, Jan. 2).

But in a public teleconference Friday, the full 44-member board was unable to reach quick approval of the draft and instead opted to take a look at a revised version during another public call late this week. One member, for example, objected to the work group’s conclusion that some parts of the proposed rule conflict with "established science."

That term "sounds like it’s almost one of the immutable laws of nature," said Robert Phalen, a professor of medicine at the University of California, Irvine. As possible alternatives, Phalen suggested the report instead reference "recent scientific findings" or "recent scientific data."

Trump, in his speech yesterday, also announced that he directed the Army Corps of Engineers to withdraw a proposed rule on reservoir and water supply operations. The rule was proposed in 2016, but the Army Corps announced last September that it was delaying it at least six months after a dozen Western states criticized it.

The president said the water supply rule "would give the federal government vast and unlimited power to restrict farmers’ access to water."

"Water is the lifeblood of agriculture," Trump said, "and we will always protect your water supply."