Trump Hotel could be protected by Obama-era flood barrier 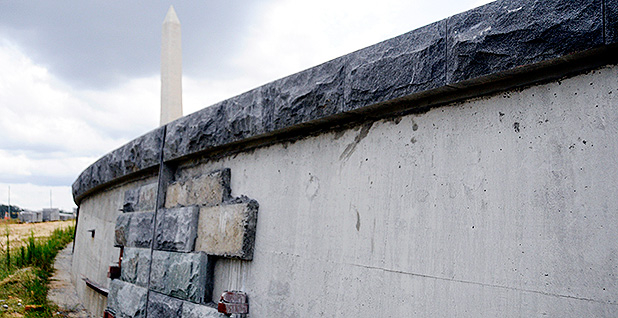 The Trump International Hotel Washington, D.C., just five blocks from the White House, could benefit from one of the district’s newest flood control projects, known as the 17th Street Closure Structure.

Completed in 2014 within shadow distance of the Washington Monument, the $9.4 million flood wall and removable flood barrier are the newest link in the 82-year-old Potomac Park Levee System.

With Hurricane Florence expected to make landfall early Friday on the North Carolina coast, district officials and federal agencies, including the White House, are hunkering down for what could be the most powerful tropical storm to hit Washington since Hurricane Isabel in 2003.

It could also put the 17th Street Closure Structure to its first real-world test. It was completed during the Obama administration, which prioritized efforts to address climate change. The National Park Service oversees the structure and will decide whether to use it as Florence makes her way up the Atlantic Coast after potentially colliding with North Carolina’s Outer Banks early Friday.

Washington Mayor Muriel Bowser yesterday morning declared a 15-day state of emergency, noting that while the storm’s track remained uncertain, residents and tourists should "take this storm seriously." Bowser included the 17th Street flood structure in a report on the city’s efforts to adapt to climate change.

Trump, returning yesterday from a Sept. 11, 2001, memorial service in Shanksville, Pa., told reporters at Joint Base Andrews that the federal government is "absolutely, totally prepared" for "what could be a very bad one, as you’ve probably heard."

It remained unclear late yesterday where the president will ride out the storm, which is expected to bring tree-toppling winds and between 6 and 10 inches of rain to the greater Washington, D.C., region, including Potomac Falls, Va., home of the Trump National Golf Club. Lesser amounts of rain are expected in Charlottesville, Va., 120 miles to the southwest and the site of the Trump Winery.

Federal and local officials in Washington have long known that if a hurricane pushes a wedge of water up the Potomac River, it could result in massive flooding throughout the city, placing national parks, monuments, memorials and other valuable artifacts at great risk.

A reassessment of Washington’s flood risk began after Hurricane Katrina in 2005 and was accelerated by a major flood event in June 2006 that damaged a number of downtown landmarks, including the National Archives, several Metro subway stations and the 12th Street Expressway tunnel near Constitution Avenue.

In January 2007, the Army Corps of Engineers concluded that the long practice of building a temporary sandbag and Jersey barrier levee across 17th Street during major flood events was no longer reliable, and began preparing for a more permanent fix.

Today, residents and tourists pass the 17th Street floodwall every day, perhaps not noticing what looks like a landscape enhancement more than a flood control structure. The structure’s gray stone walls curve and recede as they approach higher ground on both sides of 17th Street, giving the impression of a gateway to the Washington Monument to the east and the World War II Memorial to the west.

Atlas Obscura, the travel website for off-the-wall tourist sites around the world, calls the floodwall "a mysterious structure by the Washington Monument … designed to protect the White House against rising waters."

The president, a climate change skeptic, can only hope it works as intended.