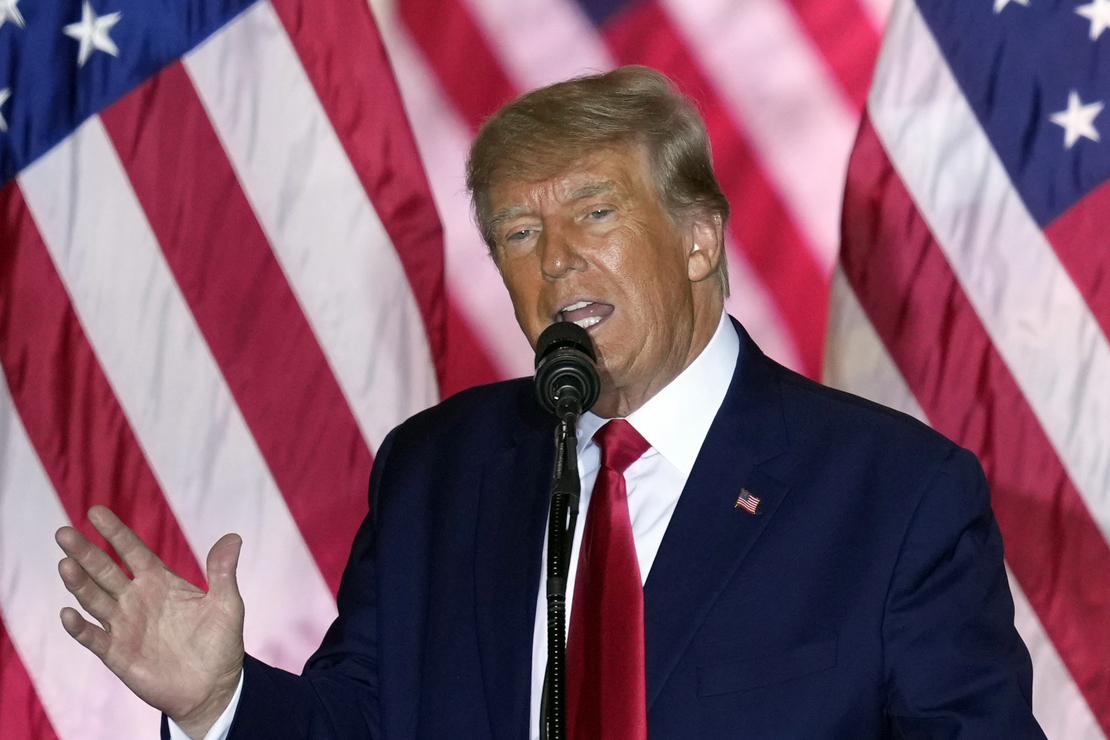 Former President Donald Trump is returning to the campaign trail with his energy and environmental legacy in tatters.

Trump’s policies to boost fossil fuel production, roll back environmental standards and stymie international climate action largely have not survived, less than two years after the Republican left the White House. Some were unwound by President Joe Biden, others tossed by the courts and a few nixed by Congress.

But in announcing his third run for president Tuesday, Trump returned to his familiar rhetoric on climate. Namely: ridiculing efforts to reduce planet-warming emissions from oil and gas production, which scientists say is necessary to avoid the worst impacts of climate change.

“The Green New Deal and the environment, which they say may affect us in 300 years, is all that is talked about,” Trump said, inaccurately describing the timeline for climate impacts, which are already occurring. “They say the ocean will rise one-eighth of an inch over the next 200 to 300 years, but don’t worry about nuclear weapons that can take out entire countries.”

Trump accused Biden of ignoring the threat of nuclear war with Russia, predicted gasoline prices would rise and argued that the country would be better off if his own energy policies were still in place. By focusing on climate policies, Biden “has intentionally surrendered our energy independence,” Trump said.

Trump’s rhetoric dismissing the value of any climate action matches how his administration governed, according to experts. He sought to undermine U.S. climate action in general — and unwind the policies of President Barack Obama, who many Republican voters blamed for killing coal jobs.

“For the Trump administration, their regulatory agenda was overwhelmingly negative. And that really was a departure [from past Republican presidents],” said Philip Wallach, a senior fellow at the American Enterprise Institute.

The administration of former President George W. Bush, for instance, wanted to implement market-based systems to achieve some environmental protections, he said.

“They had an agenda,” he said. By contrast, “the Trump agenda really was overwhelmingly: Roll back Obama regs.”

Trump enters the 2024 campaign as the favorite for the GOP nomination. He’s not a lock, and some Republicans are already turning to Florida Gov. Ron DeSantis.

But some observers think that’s a distinction without a difference. Trump’s influence over the Republican Party is evident in how his challengers have sought to frame themselves: Trumpism without Trump.

“Would it be terribly different under DeSantis? Not necessarily,” said Michael Gerrard, director of Columbia University’s Sabin Center for Climate Change Law. “The two have different styles, but substantively they don’t seem that far apart.”

Trump’s influence over climate policy isn’t totally gone. His appointees continue to constrain Biden’s actions. The Supreme Court is the most dramatic example, where Trump appointed three of the six justices who voted in West Virginia v. EPA to limit the federal government’s authority to regulate carbon pollution from power plants.

With 234 confirmed judges, Trump reshaped the entire federal judiciary to be more hostile to climate action. That’s already had implications for Biden’s policies. It was a Trump appointee — Judge Terry Doughty of the Western District of Louisiana — who first ordered Biden to resume leasing federal lands and waters for fossil fuel development (Energywire, June 16, 2021).

Trump appointees still matter outside the judiciary, too. The Federal Energy Regulatory Commission may soon lose its chair — and Democratic majority — leaving Trump’s two Republican appointees in a deadlock with the commission’s remaining two Democrats. Chair Richard Glick, a Democrat, is set to leave by the end of the year after Sen. Joe Manchin (D-W.Va.) blocked his reconfirmation over climate disputes. That could hamstring Biden’s renewable energy agenda (Energywire, Nov. 11).

Biden tightened Trump’s lax vehicle pollution standards, one of the most consequential U.S. climate regulations. He rejoined the Paris climate agreement. And he’s made it more difficult for new fossil fuel development on federal lands.

Bipartisan majorities in both the House and Senate voted to strike down Trump’s loosening of methane pollution rules under the Congressional Review Act. And a week after Trump left office, a judge struck down EPA’s “secret science” rule — one of several conservative attempts to constrain federal rulemaking itself.

That rule would have constrained regulators from considering studies that haven’t published their raw data. The Trump administration also sought to exclude some benefits of air regulation from consideration (Greenwire, June 9, 2021). Critics also saw Trump’s move of the Bureau of Land Management headquarters to Grand Junction, Colo., as an effort to cull federal workers.

Republicans likely will continue to focus their ire on the federal workforce. Former Interior Secretary Ryan Zinke, newly elected as a Republican representative for Montana, has already signaled that he wants to rein in federal workers.

That’s a prominent focus for Republicans, said Wallach of AEI, because they see the secret to making agencies more GOP-friendly is “somehow getting a handle on the deep state.”

“That’s definitely going to be of big interest in another Trump administration,” he said, “but probably in a DeSantis administration — or whoever — as well.”