Trump nods to GOP shift on warming without saying ‘climate’ 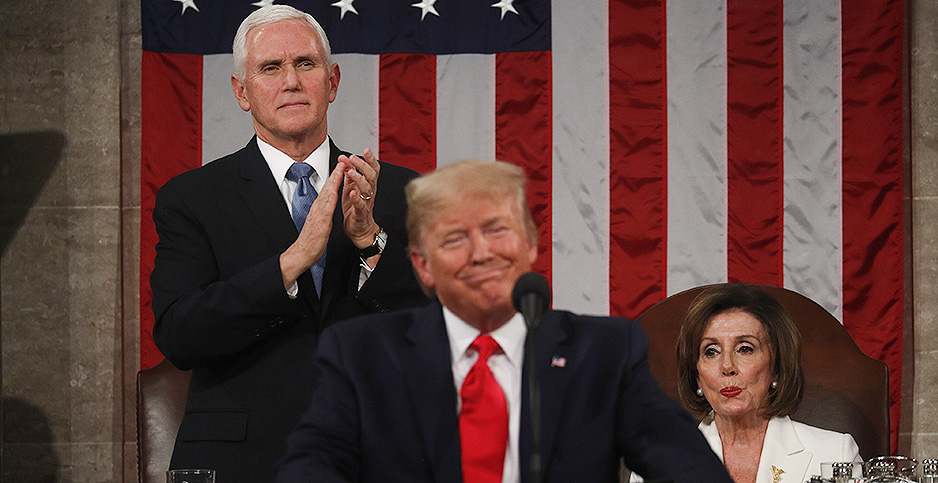 President Trump hinted at a policy to reduce carbon emissions. It was a first for the president in a State of the Union address — though he did not say the words "climate change."

The nod came when Trump expressed support for planting trees, an idea that has gained momentum among international business leaders and conservative lawmakers in the United States.

"To protect the environment, days ago, I announced that the United States will join the 1 trillion trees initiative, an ambitious effort to bring together government and the private sector to plant new trees in America and around the world," Trump said.

Reforestation is a key theme for Republicans who want the party to craft a softer message on climate change, even as Trump continues to reject sea-level rise and other climatic changes being observed by his administration (Climatewire, Dec. 12, 2019).

Trump first brought up the issue of planting trees at the World Economic Forum meeting last month, when he said the United States would participate in an international effort to beautify the planet by planting a trillion trees. The idea is rooted in the ability of trees to absorb carbon dioxide; Trump didn’t mention emissions or climate change at the economic forum.

Planting trees is one piece of a larger package that House Republicans have been working on for months to get the party more engaged on the climate issue. Last month, Minority Leader Kevin McCarthy (R-Calif.) and other GOP lawmakers released the outlines of a plan to capture carbon dioxide emissions, reduce plastic pollution and invest in clean energy, a category that they say includes natural gas and nuclear power. The plan doesn’t attempt to reduce the use of fossil fuels.

A separate bill that calls for planting 3.3 billion trees in the United States over 30 years will soon be introduced by Rep. Bruce Westerman (R-Ark.).

Last night, Trump emphasized the expansion of oil and gas in the United States while lightly touching on the climate ideas emerging from his party. He credited his deregulatory actions for spurring energy development, a theme that runs crosswise to scientists’ warnings that rising emissions threaten to lock in some of the worse effects of climate change.

"Thanks to our bold regulatory reduction campaign, the United States has become the No. 1 producer of oil and natural gas in the world, by far," Trump said. "With the tremendous progress we have made over the past three years, America is now energy independent, and energy jobs, like so many elements of our country, are at a record high."

In the White House, there was little surprise that Trump did not embrace the GOP’s interest in climate policy.

"The kids like the ideas," said one White House official, speaking on background. "The boss, not so much."

Republicans are increasingly concerned about alienating voters by rejecting climate change. That’s especially true when it comes to younger people and suburban women. Polling increasingly reveals that politicians could face electoral risks by ignoring the issue, particularly in places like Florida where the effects of warming are hard to dismiss.

"The #trilliontreesinitiative is one piece of a broader GOP strategy to address our climate with market-friendly, practical, and realistic solutions," the committee tweeted. "@housesciencegop is joining the @GOPLeader effort by proposing to double investment in basic research & drive new energy technology."

The small steps by Republicans seem to signal that the "decade of disastrous disputation" might be ending, following the rise in climate denial after the recession and the election of President Obama, said Bob Inglis, a former Republican congressman from South Carolina. He pointed to the formation of the Senate Climate Solutions Caucus, led by Sen. Mike Braun (R-Ind.), as a sign that Republicans are willing to differentiate themselves from Trump on climate change. They’re clearly watching the polls, Inglis said.

Democrats promise to use Trump’s immovability on climate change as a weapon in the general election. Democratic caucusgoers in Iowa on Monday ranked climate change as a top issue, second only to health care, a Washington Post poll found. In his closing speech in Iowa, Sen. Bernie Sanders (I-Vt.) made it clear that he will use the issue against Trump.

"Unlike the president, the American people understand that climate change is not a hoax but is an existential threat to our country and to the entire world," Sanders told his supporters.

Sanders and Rep. Alexandria Ocasio-Cortez (D-N.Y.) both skipped the State of the Union speech last night. Sanders campaigned in New Hampshire, while Ocasio-Cortez tweeted that she did not want to "normalize Trump’s lawless conduct & subversion of the Constitution."

For now, planting trees is the one thing that Trump and liberal Democrats agree on.

A massive tree-planting campaign could be a step in mitigating carbon emissions, said Phil Duffy, a climate scientist and president of the Woods Hole Research Center. Expanded forest cover in the United States could sequester carbon, but it won’t offset the sheer amount of emissions being released by cars, power plants, industrial facilities and buildings.

"The potential is very, very big, but also finite and almost certainly by itself not enough," Duffy said of planting trees. "The most aggressive natural solutions climate plan isn’t going to keep up with emissions, so if you don’t stop emissions, you haven’t begun to address the problem."