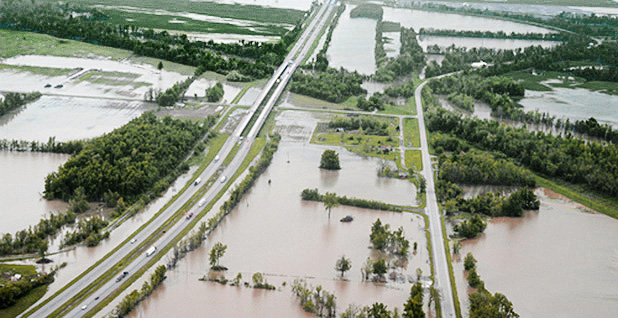 President Trump’s pick to lead the Army Corps of Engineers owns property affected by one of the most contentious flood-control projects in the Mississippi River watershed.

Rickey Dale "R.D." James’ cotton gin and grain elevator business is in southeast Missouri’s St. Johns Bayou-New Madrid Floodway. On the corps’ books since the 1960s, the $165 million plan calls for plugging a quarter-mile gap in a levee to help farmers in the flood plain.

The project is opposed by environmentalists and the Fish and Wildlife Service because it would drain 53,000 acres of wetlands and sever the last connection in Missouri between the Mississippi River and its backwater flood plain. It also draws fire from landowners and towns that would flood if the corps closes the levee gap.

Foes of the project cheered in January when the White House Council on Environmental Quality struck a deal with the corps hours before Trump’s inauguration. The agreement requires the corps to mitigate environmental damage by opening another gap in the levee to replace one being filled — a near-death blow for the project.

As a longtime member of the powerful Mississippi River Commission since 1981, James has been a champion of the project that was backed by the seven-member federal panel. Established in 1879, the commission — which oversees the river from its headwaters at Lake Itasca, Minn., to the Gulf of Mexico — comprises three officers from the corps, one from NOAA, and three civilians nominated by the president and confirmed by the Senate.

"Given the lobbying opportunities enjoyed by Mr. James, there is little surprise that the Commission supports the project and accords minimal attention to the environmental and conservation hazards it will pose," the Sierra Club wrote in 2003.

Now other environmental groups are expressing concerns that James — if confirmed by the Senate to lead the Army Corps — would use his post to revive the project.

"There has always been a conflict of interest for him because he is a landowner and he owns buildings that are in the floodway," said Olivia Dorothy, associate director of Mississippi River management for the nonprofit American Rivers.

How much land does James own in the 130,000-acre floodway? One estimate says he and his family trusts own 4,764 acres.

George Sorvalis, who worked with the National Wildlife Federation in Missouri until 2013, came up with that number after analyzing state and local land records.

"It makes sense for R.D. James to want this project because his land would be able to be farmed more intensely with a levee preventing backwater flooding," he said.

James’ business, A.C. Riley Cotton Co. LLC, is located in New Madrid, Mo., with headquarters just outside the floodway. James and his family’s land is located at the bottom of the floodway just above the levee gap, which is meant to serve as a kind of relief valve for the floodway.

During high water periods on the Mississippi River, the corps can blast a hole in the levee upstream to let floodwaters spread out in the flood plain. Landowners were paid to allow this to happen — by 1942, the corps had purchased flood easements on 106,858 acres within the floodway at an average price of $17 an acre, according to a corps fact sheet.

But the floodway has been used only twice — once in 1937 and again in 2011 — both times in the face of intense political pressure from landowners trying to prevent it (Greenwire, Dec. 20, 2011).

‘They waited too long’

In his role on the Mississippi River Commission, James was involved in the 2011 decision to use the floodway, an action that ultimately flooded all the farmland in the area, including some of James’ property.

According to an Army Corps flood risk management newsletter, James advised Mississippi Valley Division’s commander at the time, Maj. Gen. Michael Walsh, on the decision to activate the floodway.

"My family’s land lies within the floodway, and I could not displace from my mind what the decision would mean to my friends and neighbors who live and farm the floodway’s 130,000 acres," James told the newsletter. "As I sat with Maj. Gen. Walsh throughout the day, my position as a member of the commission weighed heavily on my soul."

• A native of Fulton County, Ky., he lives in New Madrid. He and his wife, Jennye, have a son, Albert Riley James, who works in the family farming business. Their daughter, Virginia James, is deceased.

• Appointed to the Mississippi River Commission by President Reagan in 1981. He’s one of the powerful commission’s longest-serving members, having been appointed to a third nine-year term by President Obama in 2016.

• Received a degree in civil engineering from the University of Kentucky in 1971. He also worked as a college student at Kentucky’s water resources department’s engineering office.

• He was past president of the Southern Cotton Ginners Association and served on the board of directors and executive committee of that group and the Cotton Producers of Missouri, the U.S. Bank of Sikeston and Osceola Products. He was also a member of the New Madrid County Board of Education, serving as president from 1980 to 1998.

But James said he understood Walsh’s decision was bound by law requiring the floodway to be activated if floodwaters surpassed a 61.5-foot trigger.

"I know that Maj. Gen. Walsh withheld his order to activate until the moment there was no choice," he said. "When he gave the order, I prayed for the safety of all involved, and for all affected. I applaud his delayed and deliberate approach to giving that order, and support him in doing so."

The decision to use the floodway came after waters had risen to 61.72 feet, overtopping the levees near Olive Branch, Ill., and threatening another community.

Politicians in those communities accused the corps of waiting too long to open the floodway because of the agency’s connections to Missouri farmers whose lands would be flooded.

"It looks good for James to say he was involved in flooding his own farm, but he really should have recused himself," said Brad Walker, big rivers director of the Missouri Coalition for the Environment. "They waited too long to flood it."

In a 2014 letter to President Obama, two dozen mayors from southern Illinois and Missouri argued closing the gap to protect farmers in the floodway would only increase political pressure to avoid using it in the future.

"The St. Johns Bayou-New Madrid Floodway project will put our communities at even greater risk of catastrophic flooding by creating more obstacles and opposition to the Floodway’s use," they wrote. "We are at a loss to understand how the Corps of Engineers could determine that this is in the national interest. We certainly know that it is not in the interest of our communities."

‘I’m worried he will revive it’

As Obama prepared to leave the White House, his Council on Environmental Quality’s deal with the corps hamstrung the floodway project by requiring the agencies to find a way to maintain a natural hydrologic connection between the two sides of the levee (Greenwire, Jan. 20).

Green groups then worried the deal wouldn’t stand in the Trump administration.

Undoing the agreement would require the Interior Department or U.S. EPA to ask the White House to get involved in putting the floodway back on track.

The project has survived previous attempts to kill it.

At one point, the corps began building the levee before the project was stopped in 2007 by a federal judge, who found the agency had bungled its environmental analysis.

The judge forced the Army Corps to restore the site.

Environmentalists have claimed that the most recent iteration of the project outlined in a 2013 draft environmental impact statement was essentially the same as the project in 2007 and still contained errors.

Now, they say, James’ nomination once again opens the door for the project to proceed.

"Of course I’m worried he will revive it," Walker said. "In my opinion, he was only on the commission to advocate for that project, so it is certainly probably part of his goal if he becomes assistant secretary of the Army. It seems pretty convenient."

Martin Lancaster, who led the Army Corps during the Clinton administration and worked closely with James, said he didn’t believe James would let personal interests get in the way of his job.

"He is a very fair man," Lancaster said, "and I have never seen evidence of his taking advantage of any of his appointments for his own personal benefit."

He added, "Nobody is more qualified for this position." Lancaster now works for Washington consulting firm Dawson & Associates, which specializes in water projects.

"Whenever we were together, he was always so congenial and also so knowledgeable about corps issues and wanting to know more," he said.

"As a farmer, community leader, and accomplished civil engineer, R.D. James has worked tirelessly to improve communities along the Mississippi River and throughout southeast Missouri," he said. "He has the expertise necessary to develop and implement forward-looking plans to strengthen our critical infrastructure. I urge my colleagues to quickly confirm this nomination, and I look forward to working with him."

Sen. Roger Wicker (R-Miss.) welcomed James’ nomination, saying he "has the experience and the skill necessary to lead the Army Corps."

"In Mississippi, we know all too well how important the Corps is to building infrastructure and keeping our homes and communities safe from floods," he said. "Mr. James knows how important it is, too. I am confident that he is the right man for the job, and I commend the President on his selection."