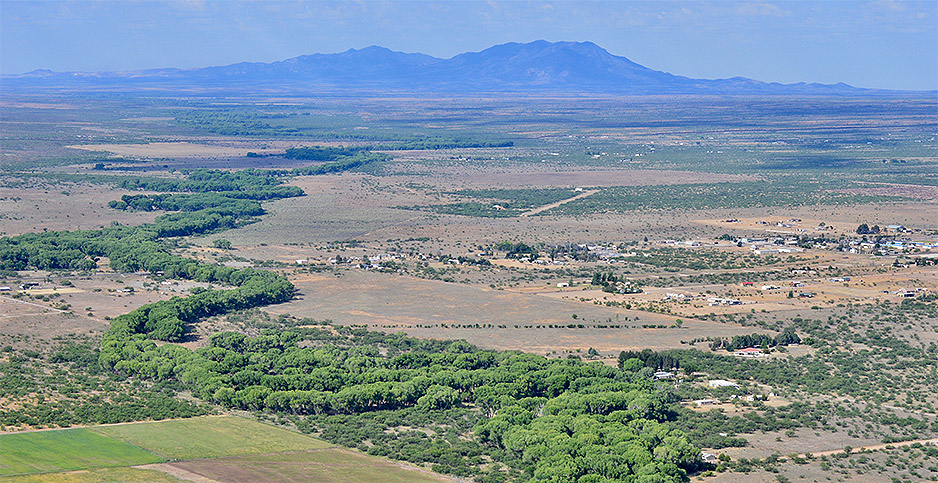 SIERRA VISTA, Ariz. — It’s easy to spot the San Pedro River from the air; just look for the cottonwood trees outlining its banks.

The bright green forest persists even at the height of Arizona’s dry season in June, when most of the river doesn’t have any water. But summer monsoons this month bring waves of water up to a dozen feet tall.

The path of past floods is obvious from 12,000 feet in the air — a wide strip of limestone sand winds through the trees, as though a bulldozer cleared the way.

"The river is even wider than the roads here," said Chris McVie from the cockpit of a four-seat Cessna airplane flying over Cochise County.

A Coalition for Sonoran Desert Protection board member, McVie took to the skies this June to explain the ecological importance of these rain-fed flows. It’s a concept environmental and conservation groups argue the Trump administration ignored in its Waters of the U.S., or WOTUS, proposal to erase Clean Water Act protections for waterways like the San Pedro River that flow only after rainfall.

The regulatory change is the latest threat to the San Pedro, which has long been a battleground between homebuilders needing groundwater to serve their developments and environmentalists who fear the river could be sucked completely dry.

"WOTUS really makes me want to shake somebody," McVie said. "What’s important is it’s still a living river, and a salvageable one, if people get their heads out of a very dark place and start treating it like the resource that it is."

Much of the upper river basin — the part closest to the Mexican border — is protected by the Bureau of Land Management in the San Pedro Riparian National Conservation Area. All told, just 22 miles of river permanently holds water, and many of those miles are protected in the SPRNCA. Flows in the rest of the San Pedro are subject to the weather.

But even where the river runs dry, it packs an ecological punch.

The San Pedro is one of the last free-flowing rivers in the Southwest. Without locks or dams, its natural boom and bust cycle — and the habitat that creates — is preserved.

Dividing the Sonoran and Chihuahuan deserts, the river is a migratory highway for Mexican birds that summer here and Coloradan birds that winter here. Many species that depend on the San Pedro, like the Southwestern willow flycatcher, are endangered. Big cats like jaguars and ocelots also call the river home.

What brings them here are the cottonwoods, which depend on two things to survive. The first is a constant source of shallow-subsurface groundwater that wets their roots. The second is fresh, new sandbars without any competing vegetation.

Rainfall is important to both. The sandbars are created when monsoon floods carry sediment downstream. And rain-fed ephemeral tributaries account for 15% of aquifer recharge here, contributing to subsurface groundwater flow into the river.

"People will come visit the San Pedro and say, ‘It’s barely a creek.’ It’s laughable to them," the Nature Conservancy’s Arizona Water Projects Director Holly Richter said. "But when I look at that ecosystem, I see this incredible habitat. It’s not about we want a river that is 6 inches wide or 6 feet wide, it’s about we want a habitat that looks like this."

Before trappers eliminated them in the 1800s, the San Pedro was once called the Beaver River. A few years ago, BLM reintroduced some of the large rodents into the SPRNCA and tracked them.

During large floods, some of the beavers migrated a hundred miles away. One swam all the way to the Gila River.

"These are big, clunky guys with webbed feet and heavy tails — hiking is not their favorite sport," Richter said. "So, is there continuity in the movement of water and nutrients in this system? Absolutely."

Persistent groundwater pumping has threatened base flows to the San Pedro River for decades. Whenever a pump is put into the ground, it creates a "cone of depression" that sucks water from other areas of the aquifer. Depending on its location, a new pump can create a new cone of depression, or expand existing ones, lowering groundwater tables.

One feared example is the Villages at Vigneto, a planned 28,000-home development meant to emulate a Tuscan Italian village at the base of the Whetstone Mountains. It would destroy 51 acres of ephemeral channels that are currently protected by the Clean Water Act but wouldn’t be under the Trump administration’s WOTUS rule.

Covering natural tributaries could prevent groundwater recharge, environmentalists say. They also argue that pumping for Vigneto drinking and irrigation water would likely intercept shallow subsurface groundwater flow from the mountains that normally ends up in the San Pedro.

Vigneto developers did not respond to requests for comment.

Environmental groups are suing over Clean Water Act permits for the property. The Fish and Wildlife Service’s approval of the development reversed a position the agency took during the Obama administration that any project permit would have to consider the environmental impacts of groundwater pumping on the San Pedro River.

"Challenging Clean Water Act 404 permits is an important tool we use to fight developments when we are worried about the river," Tucson Audubon’s Nicole Gillett said. "The idea that a development like this could move forward with basically no oversight in the future because of WOTUS is very alarming to us."

The state of Arizona does not have any regulations protecting its ephemeral waterways — more than 74% of waterway miles in the state.

Other avenues for challenging groundwater pumping haven’t been as successful.

The agency worried that Tribute’s groundwater needs would harm the river at the SPRNCA, where BLM is charged with maintaining natural river flows. BLM argued that because the SPRNCA had superior water rights, the Arizona Department of Water Resources should have taken the river into account when it certified there was enough water supply for the Tribute development.

Officials in the town of Sierra Vista and Cochise County argue Tribute could actually help the river. Tribute’s developer has agreed to install groundwater recharge projects and other water conservation measures as part of a broader collaboration among the city, county, nonprofits like the Nature Conservancy and the Defense Department to maintain groundwater flows to the river.

‘A soft spot for the river’

The Cochise Conservation and Recharge Network was born from a period of intense water wars.

In the 1990s, the Center for Biological Diversity sued the Defense Department arguing the Army base Fort Huachuca, located in Cochise County, was harming groundwater flows to the San Pedro River and the endangered species that live there.

Now reducing water use is part of the fort’s mission, along with training most of the military’s intelligence officers and housing America’s largest unmanned aerial systems training base, environmental division chief Dawn Rohr said.

"Our requirement is groundwater conservation, to try to keep the flows in the river, and maintain endangered species," she said.

To that end, Fort Huachuca has decreased annual groundwater pumping from more than 3,000 acre-feet in the 1990s to 1,300 acre-feet in 2018, through a combination of water reuse projects and reduction initiatives like no-flow urinals. The Defense Department has also funded groundwater recharge projects within Sierra Vista.

The lawsuit also brought together stakeholders in the region, creating coalitions that would first fund a computer model to understand the Upper San Pedro watershed and that now works on conservation and recharge projects.

Now the network is working to complete a series of seven projects to help maintain natural flows in the Upper San Pedro Basin through 2075.

The network includes many stakeholders who care for the river but are participating for reasons other than cottonwood trees and endangered birds.

Cattle rancher John Ladd donated 8 acres of his land to a groundwater recharge project he calls Horseshoe Draw after learning it would help stop erosion on his ranch. Ladd said he often disagrees with other recharge partners, including the Nature Conservancy’s Richter.

"Holly will remind me she has a Ph.D., and I say, ‘Well, I’m older than you and I have more experience,’" Ladd said. "Maintaining the river is probably one of the few things we agree on."

What WOTUS says
about the San Pedro

The proposed rule argues Clean Water Act jurisdiction is a matter of law, not science. It would protect waterways with intermittent or perennial flows to larger downstream waterways and would exclude waterways that flow only after precipitation.

It’s unclear whether the perennial and intermittent reaches of the San Pedro would remain protected under Waters of the U.S., or WOTUS, while the majority of the river loses protections, because the proposed rule does not envision a scenario where a single waterway has ephemeral, intermittent and ephemeral reaches.

It is possible, however, that even perennial portions of the San Pedro would lose protections under WOTUS. The rule acknowledges scenarios where perennial or intermittent streams feed into ephemeral ones and says ephemeral waterways "break jurisdiction" for everything upstream.

"The ephemeral feature would sever jurisdiction for such perennial and intermittent streams as it does not convey surface water year-round or continuously flow for extended periods of time to a traditional navigable water or territorial sea," the rule says.

For example, Ladd believes the WOTUS rule is a necessary rollback and says previous Clean Water Act regulations were "federal land grabs." He said he’s not worried about that rulemaking excluding the San Pedro River and doubts groundwater pumping from human development is driving the "cone of depression" under Cochise County. Instead, he blames BLM for allowing cottonwoods and mesquite to grow too tall near the river and "suck up all the water."

"I am sick of the rhetoric that man and development is the culprit," said Ladd, whose family has ranched next to the San Pedro for 123 years. "I’m outspoken about that, but I do have a soft spot for the river, and I will do what I can to protect it."

Local officials say supporting Fort Huachuca, a major employer in the area that could be imperiled if groundwater levels drop, is another big motivator.

The recharge network is already seeing some success, with one section of the San Pedro seeing "statistically significant" increases in the amount of water, Richter said. She attributes the success to two nearby recharge projects, including the one on Ladd’s ranch, and another conservation project that prevents future pumping on what was once irrigated farmland.

But the network itself isn’t a silver bullet, she said, in part because it focuses solely on the Upper San Pedro. More work is needed in the Lower San Pedro Basin, where creation of a groundwater computer model was interrupted when funding ran out.

"We couldn’t have attracted the funders up here if we couldn’t give them the certainty that we knew each project we implemented would solve the project, but it’s a bit of a Catch-22 because you can’t get the certainty without the strong science, and you need funding for that," Richter said.

To Gillett, at the Audubon Society, the collaborative effort to recharge the San Pedro belies the problems with WOTUS.

"The bureaucrats in D.C. just think, ‘Well, this doesn’t flow often, why would anybody ever care about it?’" she said. "But the reality is you have a lot of partners on the ground, including the federal government, who really do care about this river."