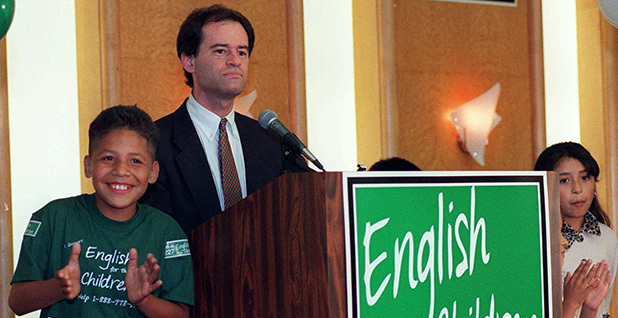 Businessman Ron Unz, shown here in 1998 supporting an initiative to end bilingual education in California, is echoing some of the same themes as Donald Trump as he campaigns for Senate. Photo courtesy of AP Images.

Voter registrations are surging in California, with the number of new and re-registered Democrats up sharply — dramatically outpacing the total for the GOP, an analysis of the data shows.

New Democratic registrations are nearly triple the number seen before the 2012 presidential election, when there similarly was a surge of voter interest, according to research from Political Data Inc., a nonpartisan group. Republican registrations have increased 68 percent
compared to the 2012 ballot. Registrations for No Party Preference – a popular independent category in California — have risen 72 percent.

There are more than double the registrations from Latino voters that there were in 2012, said Paul Mitchell,
vice president at Political Data Inc. That’s significant because that group tends to vote about 70 percent Democratic. Meanwhile, registrations from adults ages 18 to 24 rose 78 percent
vs. the last presidential election.

Political Data has analyzed more than 791,000
registrations made since January, Mitchell said, and they’re still going through the information. They project California already has added more than 1 million voters.

This trend appears to be a potential twist on what GOP presidential front-runner Donald Trump boasts about on the campaign trail — that he is bringing new voters into the process. Mitchell said he’s teaming with a group to survey new voters on their motivations, but there’s suspicion it’s being driven by anti-immigrant and other "inflamed rhetoric" from certain candidates and their allies.

"The national narrative is that Trump is exciting this base of voters that was previously disenfranchised and getting them to the polls," Mitchell said. "When we first started getting voter files, we expected to see high rates of Republicans. What seems to be happening in California is it’s the Latinos and Democrats who seem to be registering in higher numbers."

Registrations have jumped so much, Secretary of State Alex Padilla (D) recently asked Gov. Jerry Brown (D) for $32 million extra "to ensure that California’s 58 county election officials and the office of secretary of State have adequate resources to conduct the June and November elections."

The increase potentially could affect both the June 7 primary races for presidential nominees and the contest to replace Sen. Barbara Boxer (D-Calif.), who is retiring after four terms. The Golden State has open, or "jungle," primaries, where all candidates for an office appear on a single ballot and the top two finishers advance to the general election, regardless of political party. The big increase in new and re-registered Democratic voters, if they show up for the June primary, could mean two Democrats win the Senate primary and compete against each other in November, experts said.

"The real problem is that the Republicans, first, they’re unknown, and second, they are running pretty invisible campaigns right now," said Eric Smith, professor of political science at University of California, Santa Barbara. "It’s quite possible that we could have Harris and Sanchez running against each other" in November.

Tony Quinn, political analyst with the California Target Book, cautioned, however, that it’s important not to read too much into the registrations.

"The new registrations, at least in California, do not necessarily mean new voters, especially in the primary," Quinn said. Even if there’s "an enormous turnout" like the 70 percent of registered voters seen in earlier high-profile elections, "the people that are likely to turn out are the people who have turned out before."

But others say the surge in California registrations could have a broader, longer-lasting impact. If those voters show up at the polls and in future elections, it could shift the Democratic state into a deeper shade of blue.

For this election, if Trump is the Republican presidential nominee, Latino and Democratic registrants could flood voting booths, said Kevin Spillane, a Republican strategist based in Sacramento. A large number of those voters likely would reject Republican candidates all the way down the ballot, he said. That could cost some House members their seats and return a Democratic supermajority to the California Legislature.

"The consequences for Republicans in California would be devastating," Spillane said.

For the California primary in June, voters will be somewhat separated when it comes to voting for president. Only registered Republicans can vote for the top office in the GOP primary. Those registered as no party preference can request a ballot for the Democratic presidential primary.

But all can vote for any of the candidates for the Senate seat. All Senate candidate names will be on every primary ballot.

Of the GOP candidates, the ones who register the most support in polls are two former state Republican Party chairmen, Tom Del Beccaro and George "Duf" Sundheim, and Ron Unz, a millionaire software developer who ran for governor in 1994.

"Ron Unz may have an advantage, but there’s no one around whom the party seems to be converging around," Smith said.

Spillane said that although GOP voter registrations are up, "most of them will just step into the booth and go eeny, meeny, miny, moe" when it comes to choosing from the U.S. Senate candidates on the ballot.

"It’s entirely possible that one of these Republican candidates can get past Loretta Sanchez" for second place in the primary, earning a spot on the general election ballot, Spillane added. While not ruling that out, he said, "I think Sanchez has a better chance" of ending up in a top two Democratic final "than anyone has in the past. The Republican field is so weak and so diluted that it lessens the chance that voters will coalesce around one."

Quinn with the California Target Book said none of the Republican candidates has a base of support with money.

"This is a huge state, and getting your name known in this state is not easy," he said.

Unz is self-funding his campaign, although he’s not spending that much money. He said he wrote his campaign a check for $50,000. Unz, who only recently entered the race, placed first among the GOP group in a Field Poll released Monday. He was favored by 5 percent of all likely voters, the highest amount of any Republican. For registered Republicans, he was favored by 10 percent, the top number.

In that same poll among all likely voters, Harris had 27 percent to Sanchez’s 14 percent. Democratic voters preferred the attorney general over the congresswoman 44 to 23 percent.

The telephone survey of 633 California likely voters had a margin of error of 4 percentage points.

Quinn said the tide for the Senate race might shift if the Democratic presidential race appears wrapped up by the California election in June. The Republican White House contest is unlikely to be settled by then.

"That would be the only way I could see one of the Republicans making it" into the top two finishers in the Senate race, Quinn said. There are not a lot of other contests and no ballot measures to interest Democratic voters, he said, adding that "if it’s not the presidential race, there’s not much to bring people out."

Mitchell at Political Data said earlier this year that he believes it will be one Democrat and one Republican emerging from the Senate primary, and said now he’s sticking to that even with the large increase in Democratic voters. He predicted that Republicans likely will coalesce around one candidate.

But he said the large increase in registered Latinos could make a difference for Sanchez, if those voters show up.

"You could have a surge in Latinos voting," Mitchell said. "I think you could make an argument that could potentially help her hang on to that [second] Democratic spot."

He and others experts said, however, that Latinos don’t vote monolithically. Spillane said there are 15 congressional districts out of 53 in the state where 20 percent or more of Republican registered voters are Latino. Those include parts of Los Angeles and north Orange County.

Unz in an interview said the rise in Republican registrations could boost his chances.

"It’s clearly being driven by the kind of anti-establishment movement that we’re seeing in both parties," Unz said. In the Senate race, he said, there are "a couple of fairly establishment Democrats … and a couple of Republicans whose only background really is as party functionaries, and someone like me, who’s more of an outsider.

"I would think something like that would probably be helpful to me," he said.

Unz said he’s running primarily on three issues. The first is English-only education in schools. He authored a ballot measure, Proposition 227, that passed overwhelmingly in 1998 and was put in place in California. The others are a federal ban on affirmative action, or race-based preferences in hiring or school admissions, and an increase in the minimum wage.

He said he’s not an expert in energy or environment issues but would learn about them and be open to all sides.

There’s speculation that the increase in voters is powered by a rejection of ideas put forth by Trump, including those on Mexican and Muslim immigration, said Smith with UC Santa Barbara.

It could be similar to what happened in the state in 1994, when Californians by a vote of 59 to 41 percent passed Proposition 187, which would have barred undocumented immigrants from using public schools, non-emergency health care and many state services. Then-Gov. Pete Wilson (R) supported it. There were multiple legal challenges and court rulings. Ultimately, then-Gov. Gray Davis (D) in 1999 withdrew a court appeal that Wilson’s administration had filed, which killed the law.

But its passage drove Latinos to register to vote, and pushed some undocumented immigrants to seek citizenship, several analysts said.

"They’re registering in higher numbers because of the inflamed rhetoric that’s going on around the country," Mitchell said. "We saw this in California with Prop 187 back in the ’90s and some campaign rhetoric that was strongly anti-Latino.

"It had the counter-effect of strengthening, emboldening and turning out Latino voters in unprecedented numbers and forming a Latino electoral coalition of Democrats that today has been a part of the California political infrastructure," he added.