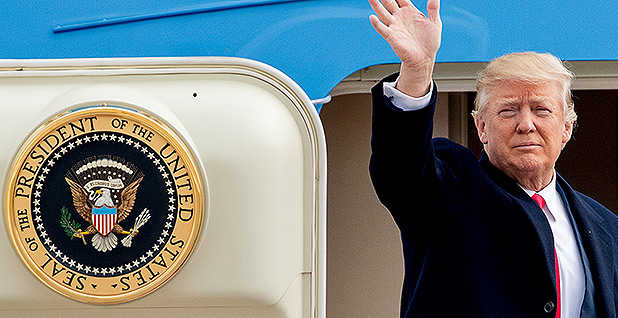 President Trump heads later this week to the Group of Seven summit, where he will meet with foreign leaders committed to climate action. Photo courtesy of the White House.

President Trump will spend much of his first foreign trip surrounded by U.S. allies who prize the Paris climate agreement and will use every opportunity to convince him to stay in it.

Italian Prime Minister Paolo Gentiloni, French President Emmanuel Macron, leaders of the European Union and others have already signaled their intent to raise the accord at bilateral meetings with Trump next week. The Group of Seven’s Italian presidency is searching for a way to recognize the deal at the May 27 leader-level summit despite Trump’s lack of a position.

"In the bilateral ahead of the G-7, Gentiloni is going to tell Trump that Italy — along with the other European Union governments — strongly support the Paris Agreement regardless of what the U.S. does," said Mauro Albrizio, European affairs director at Italy-based environmental group Legambiente.

Macron already raised the topic of Paris with Trump during a May 8 call following his election, and a French diplomatic source said he plans to do it again when the two meet for lunch in Brussels on May 25.

"They mentioned it as something important when they spoke, and Trump said he would look at it," said the source.

Trump has shown in the past that he can be swayed by foreign leaders, like when he acknowledged that the presidents of Canada and Mexico had persuaded him not to withdraw from the North American Free Trade Agreement. His counterparts abroad say they don’t know if they can pull off that coup with the Paris Agreement, but they are going to try.

Europeans especially view Trump’s trip as a timely opportunity to influence the American leader. Trump is seen abroad as wavering on last year’s pledge to pull out of the globally popular Paris deal, but subject to a confusing web of influence within his own administration. Some of his advisers support remaining in the deal, and some have argued against it.

The White House bowed to this internal controversy earlier this month when it postponed its decision on the agreement until after Trump returns from the nine-day voyage. The trip, which begins tomorrow, includes visits to the Middle East, the Vatican and Brussels, and meetings of NATO and the G-7 major developed countries.

E.U. capitals had spent the past weeks calling and reaching out to Trump’s advisers as a Paris decision seemed imminent. But now that it has been postponed, they hope Trump’s visit will let them circumvent his warring advisers and engage with the president directly, diplomatic sources say.

"The E.U. is communicating: ‘Don’t make the rash decision,’" said Maeve Mclynn of CANEurope. "They have the idea that maybe Trump is open to options."

Anna-Kaisa Itkonen, European Commission spokeswoman for climate action and energy, said the message from E.U. representatives and member states alike would be that Paris is good for the U.S. economy, rather than the planet.

"Our point has always been since Paris that the global energy transition is underway and it is irreversible, and it would not be wise of any leader to ignore it and try to reverse it," she said.

The 28-nation bloc does not appear to have prepared a "concession" or other offering to keep the United States in the agreement.

Pro-Paris Trump advisers months ago floated the idea of using a reversal on Paris to gain leverage for new international help for U.S. fossil fuels, but ideas for how to do that never materialized. It’s not even clear if the original boosters of that idea meant it to come in the context of the climate agreement or in some separate sphere, like trade.

"There’s not much in the Paris Agreement that hasn’t already accommodated previous Republican asks for what a global response to climate change should be," noted Jake Schmidt, international climate director for the Natural Resources Defense Council.

He added that the current political climate in Europe would make it problematic to be seen to cater to Trump by offering sweeteners to stay in Paris.

"There’s not a lot of appetite to try to align yourself with Trump. It’s not a great political place for a lot of these leaders to be," he said.

Flatter him and talk about the Islamic State group

But Trump has shown he can be influenced to abandon long-held foreign policy positions when he meets with world leaders.

He emerged from a meeting with Chinese President Xi Jinping in April declaring that China was not, after all, a currency manipulator as he had said throughout the presidential campaign. He walked away from pledges to walk away from NAFTA because he said Canadian Prime Minister Justin Trudeau and Mexican President Enrique Peña Nieto convinced him they were prepared to negotiate. And NATO went from "obsolete" to "not obsolete" in his estimation after a meeting with NATO Secretary-General Jens Stoltenberg. He’s now proposing a new "Arab NATO."

"What seems to be the case is that when he has these meetings with foreign leaders, he doesn’t like any conflict," said James Goldgeier, dean of the School of International Service at American University. "He likes to have agreeable meetings.

“I would advise anybody who meets with him to flatter him first, and that seems to be the most important thing to him.”

James Goldgeier, dean of the School of International Service at American University

"The problem for the foreign leaders he meets with is that he also doesn’t seem to have any trouble saying something and then changing his mind later and saying something different," he added.

As an example, he pointed to Trump’s move to place a tariff on Canadian soft wood lumber after his U-turn on NAFTA.

Brett Schaefer, a senior research fellow at the Heritage Foundation, said the Paris question differs from Trump’s position on NATO because in the latter case, partners offered Trump a better deal in the form of more resources to support defense. The same would not be true for Europeans and others eager to keep the United States in Paris, he predicted.

"That seems to be the way that the president operates," Schaefer said. "He goes into these with the idea that this is what he wants and other people on the other side of the table need to offer him something that is worth changing his mind about it."

The heart of the Paris Agreement is the individual pledges by nearly 200 nations to cut or slow greenhouse gas emissions. The United States promised to curb emissions 26 to 28 percent below 2005 levels by 2025. One option floated by Trump administration officials vying to remain in the accord has been to weaken the U.S. target.

Acceptance of a new U.S. commitment to Paris that tracks more closely with Trump administration policies would not be sufficient, Schaefer predicted, because it would likely lead to periodic pushback from countries every time the United States does something in negotiations that other countries view as insufficient.

But Goldgeier said world leaders preparing to meet with Trump need not be ready to offer something.

"I would advise anybody who meets with him to flatter him first, and that seems to be the most important thing to him," he said. "And clearly, the campaign against [the Islamic State group] ISIS appears to be the big thing on his mind, and the big thing he wants to be able to say he did something about, so to the extent that the Europeans can talk about mutual interest in defeating ISIS, that will play well to him."

Maybe no communiqué at all

Trump’s top national security adviser, H.R. McMaster, told reporters Tuesday that Trump would use the G-7 summit to "press America’s economic agenda and call for greater security cooperation." But others have warned that seeking to change the group’s established stance on climate change won’t win him cooperation on other fronts.

"I don’t think they’ve fully thought through how they’re going to come out of the G-7 meeting without having made a decision," said Schmidt. "The G-7 has been quite clear as a unifying bloc on the Paris Agreement."

In Ise-Shima, Japan, last year, G-7 leaders pledged to help the deal reach the necessary membership threshold to enter into force in 2016. It also made commitments on phasing out "inefficient" fossil fuel subsidies by 2025 and helping poor countries cope with climate change.

But having the United States in limbo on Paris going into next week’s two-day G-7 meeting in Taormina, Sicily, means the Italian presidency has to pick from a limited set of options if it wants to give the other six nations a chance to acknowledge Paris.

The last round of so-called sherpa meetings held Monday and Tuesday to prepare for next week left language on Paris and climate change to the side, including acknowledgement of the United Nations’ Sustainable Development Goals. Italian officials now have a week to chart a path forward on how to treat that and other areas of disagreement with the United States, including trade and migration.

The Union of Concerned Scientists’ Alden Meyer saw three options for the climate language, and "none of them are particularly good."

The G-7 could follow the Arctic Council’s lead and produce a communiqué next week that does little more than acknowledge the existence of the Paris deal (Climatewire, May 11). It could also avoid mentioning the agreement altogether, though Meyer said that would be a hard sell to countries like France and Germany.

The meeting could also end with no communiqué at all, denying Trump and other leaders agreement on terrorism, security and myriad other priorities.

A fourth option could see Japan, Germany, Italy, the United Kingdom, France and Canada band together in a "G-6" agreement or statement that excludes the United States and acknowledges Paris. This is roughly the path the Italian presidency took after March’s energy minister’s meeting, where Energy Secretary Rick Perry blocked language on Paris (Climatewire, April 11).

"That would be unprecedented, and that’s a tough issue for some of the countries that are trying to work with the U.S. on trade and other issues," said Meyer. "Again, there’s no good, perfect solution if that’s the dynamic at the end of the meeting in Taormina."