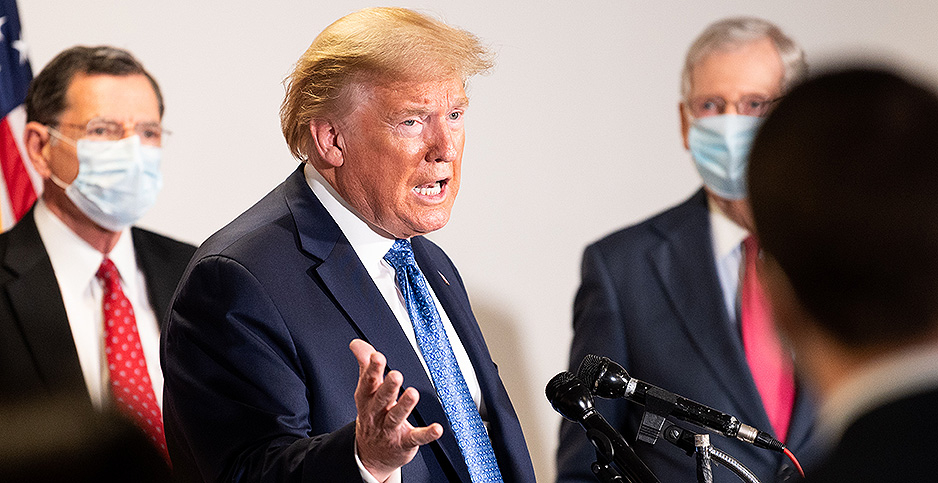 President Trump instructed federal agencies yesterday to search for regulations they could suspend or kill in hopes of jolting the U.S. economy out of its pandemic stupor.

"The virus has attacked our nation’s economy as well as its health," the president proclaimed in an executive order that directs agency heads to look for rules "that may inhibit economic recovery."

The order permits rules to be suspended temporarily or permanently to aid economic activity and job creation.

Trump signed the order at a Cabinet meeting at the White House yesterday afternoon.

"We’re fighting for the livelihoods of American workers, and we must continue to cut through every piece of red tape that stands in our way," he said at the meeting.

Under Trump, EPA has rolled back numerous regulations for air, water and chemicals in the name of streamlining them, and it has proposed to do more. Myron Ebell, who led Trump’s EPA transition team in 2016, told E&E News yesterday that the agency had already consulted with the White House on possible rules to freeze under this order.

Ebell, who heads the Center for Energy and Environment at the Competitive Enterprise Institute, said the order would allow Trump to use the emergency powers of a procedural statute to quickly jettison regulations without being encumbered by the usual rulemaking process, which normally takes a year.

"It could speed up things that are in the grinder now, but if there are creative Cabinet officials and agency officials who could identify other deregulatory actions that would help economic growth, then they can put those on the same fast track to implementation and not spend years and years trying to get them done," he said.

Acting White House budget director Russ Vought told Fox News that the measure was a way to remove the power from Washington and give it "back to the people and entrepreneur."

"If a bureaucratic rule needs to be suspended during a time of crisis to help the American people, we should ask ourselves if it makes sense to keep at all," Vought said.

The White House has reached out to conservative groups for help identifying rules that could be rolled back, even if they have nothing to do with the coronavirus crisis, observers said. Ebell said conservative groups were briefed on the action yesterday prior to the order’s release.

He provided possible targets, including provisions of the Clean Air Act, Endangered Species Act and National Environmental Policy Act. Anti-regulatory groups are now preparing ideas to submit to the administration, he said.

"We’ve been advised never to let a crisis go to waste," Ebell said.

That quote originally belonged to British Prime Minister Winston Churchill, but President Obama’s chief of staff Rahm Emanuel used it to describe the potential for economic stimulus in 2009 to advance long-held progressive goals on clean energy. He was roundly criticized by Republicans.

Thirty-six million people have filed for unemployment since stay-at-home orders took effect in March as the pandemic spread across the U.S. It has killed 92,000 Americans.

This is not the first time the Trump administration has targeted regulations during the crisis. In March, EPA released a memo stating that it would consider suspending enforcement of air and water standards if firms fall behind in meeting their obligations because of the virus.

EPA Administrator Andrew Wheeler attended yesterday’s Cabinet meeting. A spokesman said the agency will "review the final [executive order] and work to assess which EPA regulations might be available to streamline in order to achieve the goals outlined in the EO."

The agency did not immediately say what regulations might be candidates for suspension.

Joe Goffman, former chief counsel for EPA’s air office under Obama, said in an email to E&E News last night that the agency’s obligations and authorities are defined by statutes like the Clean Air Act and Clean Water Act, "not by President Trump’s executive orders, which cannot override environmental statutes or substitute rhetorical goals like ‘streamlining’ for statutory mandates."

"Streamlining or suspending rules is governed by these requirements and must be done via the rule-making process, which requires EPA to give persuasive reasons — on the merits — for its actions," he said.

Goffman added that public health standards and pollution controls are prerequisites for economic recovery, not obstacles to it.

Meanwhile, Democrats and Republicans on Capitol Hill and in the White House are grappling with the next steps of reviving the economy.

House Speaker Nancy Pelosi (D-Calif.) shepherded a $3 trillion economic stimulus bill through her chamber Friday that included aid to states and cities whose budgets have been stretched by the pandemic, as well as payments to households.

Republicans in the House and Senate have said more stimulus isn’t needed at this time.