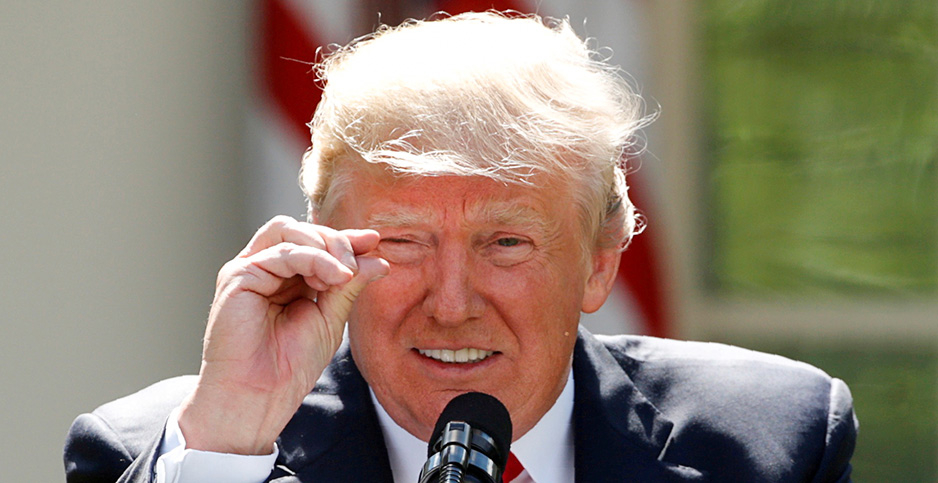 President Trump likes to take his Thanksgiving turkey with a side of skepticism.

It’s been an autumn tradition since at least 2011, when the future president made what appears to be his first public statement on climate change.

Naturally, it came by tweet: "It snowed over 4 inches this past weekend in New York City. It is still October. So much for Global Warming," Trump wrote Nov. 1, 2011.

Roll forward one year. Superstorm Sandy had just brought New York to its knees, and Trump was at it again: "Do you believe @algore is blaming global warming for the hurricane?" he asked on Twitter, referring to the former vice president.

A few days later, Trump used the plight of Sandy’s victims to goad climate change believers. "It’s extremely cold in NY & NJ — not good for flood victims. Where is global warming?" he tweeted.

"There is no reason for these massive, deadly and costly forest fires in California except that forest management is so poor," he said.

An E&E News review of Trump’s comments on climate change shows that the president has used 10 scapegoats to dismiss the challenges associated with rising temperatures.

Scapegoat: "A person who is blamed for the wrongdoings, mistakes, or faults of others, especially for reasons of expediency."

For years, Trump has been picking fights with other countries, especially rising economic powers like China and India. Much of the president’s bilateral scapegoating has come in the trade sphere, but some of his most noteworthy climate comments strike at the two Asian tigers.

He fired his first climate tweet at China in 2012: "Let’s continue to destroy the competitiveness of our factories & manufacturing so we can fight mythical global warming. China is so happy!"

Three days later he tweeted again: "The concept of global warming was created by and for the Chinese in order to make U.S. manufacturing non-competitive."

This was the raw material of the much-referenced Trumpism that climate change is "a hoax." The president later said he was joking. Sort of.

"The World Bank is tying poverty to ‘climate change,’" he tweeted. "And we wonder why international organizations are ineffective."

His U.N. climate bashing escalated from there. As a presidential candidate, Trump promised "we’re going to cancel the Paris climate agreement and stop all payments of U.S. tax dollars to U.N. global warming programs."

He called the U.N.’s Green Climate Fund a "scheme to redistribute wealth" out of the U.S. And last month, Trump marginalized a dire warning by the Intergovernmental Panel on Climate Change, a U.N. body, by suggesting that the 91 scientists who wrote the assessment lacked credibility.

The United States’ most enduring friendships have been strained by Trump’s disdain for climate action. It’s no coincidence for Trump that the "job-killing" multinational agreement to reduce global greenhouse gases takes its name from the French capital, Paris.

Germany and France are among the president’s favorite climate scapegoats. He has accused Group of Seven members of undermining trade opportunities via carbon regulation, and he ridiculed both countries for their aggressive clean energy transitions.

Some mainstream German politicians have echoed the U.S. president, according to Craig Morris, the author of a book on Germany’s energy transition. Trump also exited a G-7 summit in Quebec early last summer, citing disagreements with France and Canada over trade, but also because he refused to participate in talks related to the Paris Agreement (Climatewire, June 11).

After the Trump-infused "birther" movement lost momentum in early 2011 — and President Obama skewered Trump at the White House Correspondents’ Association dinner that April — Trump found what he believed to be a new vulnerability in Obama’s foreign and domestic policy.

By spring 2012, Trump was posting some of his first tweets about Obama "wasting" billions of dollars on climate change, including through foreign aid and financial commitments to the U.N. global warming program.

"According to @BarackObama the War on Terror is over … but global warming is a national security threat … Feel safe?" Trump tweeted on May 4, 2012. The following January, Trump predicted that Obama would "push major global warming legislation early in his second term."

It didn’t happen. What did happen was the Paris Agreement and a series of executive actions known as the President’s Climate Action Plan. Almost all of these programs have been rolled back or detoothed by the Trump administration.

It may be the most bruising job in Trump’s government.

Just ask Marcy Rockman, who until last week was a National Park Service climate adaptation coordinator before quitting in frustration. "My reason for leaving is a series of pressures from the NPS that required me to spend ever more time and energy fighting for the right to exist and perform basic tasks," Rockman said in a tweet (E&E News PM, Nov. 15).

Scientists outside government have also felt the burn. Long before he became president, Trump called climate experts "hoaxters" and "wiseguys" who peddled in "bullshit." More recently, Trump touted his own ability to parse sound science from bad, saying he had "a natural instinct for science."

Here’s looking at you, California.

The president believes your heat waves, droughts, fires and mudslides are of your own making. In August, Trump scapegoated California environmental laws for the state’s chronic water stresses, saying Gov. Jerry Brown (D) "must allow the Free Flow of the vast amounts of water coming from the North and foolishly being diverted into the Pacific Ocean."

Peter Gleick, a hydroclimatologist and co-founder of the Oakland-based Pacific Institute, wrote in The Washington Post that Trump’s comments were "unmitigated nonsense and dangerous thinking."

Trump also scapegoated Puerto Rico’s leaders after Hurricane Maria, including an unsubstantiated claim that the government inflated the storm’s death toll as part of a Democratic conspiracy to make him look bad. The death toll was based on established research methods and conducted by George Washington University.

Trump’s scapegoating of renewables is partly personal and partly political.

The first strike came when a Swedish firm proposed an 11-turbine wind farm in the North Atlantic off Aberdeen, Scotland. The turbines, Trump argued, would sully the view from Trump International Golf Links, a resort the Trump Organization bought in 2006.

According to Politico, Trump tweeted about the wind farm 60 times between 2012 and 2015, mostly to whip up public opposition to the project. As a presidential candidate in 2016, Trump transferred his negative view of wind (and solar) power to the United States.

In a radio interview, Trump described the dominant clean energy technologies as "very problematic," "very expensive" and "not working on large scale."

As president, Trump’s imposition of tariffs on Chinese-made solar panels has sent the industry into a tailspin, causing developers to freeze or cancel $2.5 billion worth of solar projects, according to Reuters. Wind energy has continued to grow.

All have crossed swords with Trump on climate change, and Trump has counterattacked with vigor and venom. Steyer, who has financed and fronted a Trump impeachment campaign, received some of the president’s choice insults after criticizing Trump in a CNN interview.

"[Steyer] comes off as a crazed & stumbling lunatic who should be running out of money pretty soon," Trump tweeted. "As bad as their field is, if he is running for President, the Dems will eat him alive!" (Climatewire, Oct. 29).

Bloomberg, who called Trump a con man and a hypocrite in a speech at the 2016 Democratic National Convention, met the U.S. withdrawal from the Paris Agreement with a $15 million contribution to the United Nations. Bloomberg has also indicated he might run for president in 2020 as a Democrat.

In response, Trump said the Democratic Party would "eat him up," adding, "You know, you have a lot of people running. I’m hearing names that are shockingly bad, but they’re nasty."

Much of Trump’s climate scapegoating has relied on social media.

David J. Park, an expert on climate change communication at Florida International University, said the president is particularly good at "unwarranted extrapolations" and "transference" of facts to deflect, obfuscate or sow confusion about climate change.

He tries that during interviews too. Several journalists have recently touched on the links between climate change and natural disasters. Under questioning, Trump has made baby steps toward acknowledging that climate change is real.

But he never forgets to muddle the message, Park said.

Perhaps that explains his Thanksgiving preference for Mar-a-Lago, the South Florida estate he purchased in 1985. In his year-ending tweet of 2017, Trump returned to one of his early climate scapegoats, that climate change doesn’t match up with his weather expectations.

"In the East, it could be the COLDEST New Year’s Eve on record," Trump said. "Perhaps we could use a little bit of that good old Global Warming that our Country, but not other countries, was going to pay TRILLIONS OF DOLLARS to protect against. Bundle up!"