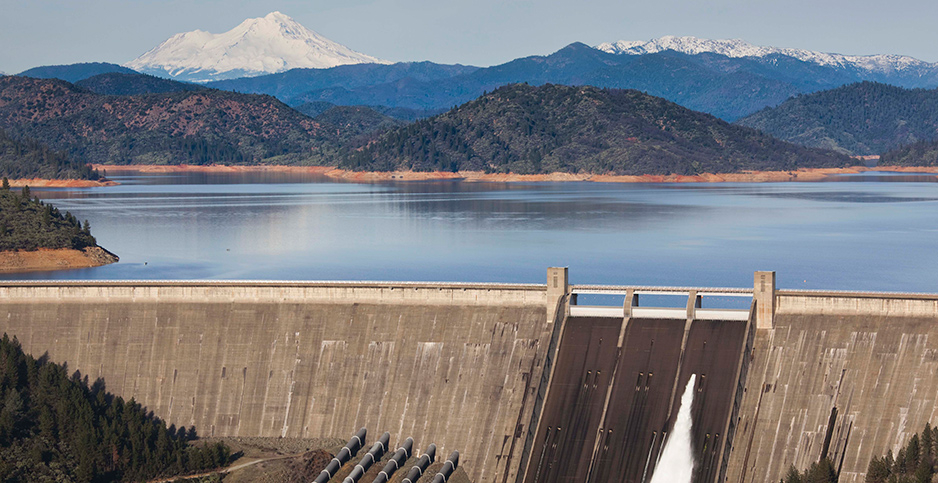 After the Trump administration announced it would move ahead with raising the Shasta Dam about 18.5 feet, California officials and conservationists have a message of their own: Not so fast. Walter Bibikow / DanitaDelimont.com Danita Delimont Photography/Newscom

The Trump administration made a splash last month announcing it was moving ahead with enlarging one of California’s largest dams to provide the drought-stricken state’s farmers more water.

But state officials and conservationists have another message for the outgoing administration: Not so fast.

The Bureau of Reclamation on Nov. 20 finished its environmental review of raising the 600-foot Shasta Dam in Northern California by 18.5 feet. It would be the Trump administration’s largest water infrastructure project, expanding one of the country’s biggest reservoirs by more than 200 billion gallons.

The highly publicized announcement, however, led some state officials to scratch their heads and others to laugh out loud. Opponents say the project is likely illegal, would require congressional backing and lacks the appropriate permits. Beyond that, the billion-dollar price tag will set a high hurdle, and the clock is running out before the incoming Biden administration takes control.

"This is the QAnon of water projects, meaning it’s laughably infeasible and just not real," said Rep. Jared Huffman (D-Calif.). "And yet, the hardcore supporters just won’t let it die."

Huffman also signaled on Twitter last night that House Minority Leader Kevin McCarthy (R-Calif.), a major proponent of the project, is threatening the government funding bill currently under consideration over a rider related to the Shasta effort.

McCarthy’s office did not respond to a request for comment at press time.

Shasta Dam impounds the largest reservoir in California. Its water is funneled into the federal Central Valley Project, which ships water from the wetter northern part of the state to its drier south.

Enlarging the dam has long been a priority for the state’s farmers, including the influential Westlands Water District, the largest irrigation water provider in the country and a former lobbying client of Interior Secretary David Bernhardt.

California Republicans touted the project’s benefits in the administration’s announcement.

"Raising Shasta Dam is critical to helping improve drought resiliency in the state of California, as it will provide more water for people, fish and the environment," McCarthy said. "This project is a win all around."

But Huffman and conservationists pointed out that one important piece of information was missing from the release: The project is illegal under California law.

That’s because the new reservoir behind an enlarged dam would inundate the McCloud River, which is protected by the state’s wild and scenic rivers statute.

"They are going to have to invent some story that they have permission from Congress to do that," said Ron Stork of the Sacramento-based Friends of the River.

Reclamation Commissioner Brenda Burman said the project is the most straightforward solution to the state’s water woes.

"Raising Shasta Dam is one of the smartest and most cost-effective opportunities we have before us," she said in the statement.

But Stork said Reclamation would need explicit authorization from Congress for several reasons. First, raising the dam would require permits under the Clean Water Act, which would be issued by the state. As it stands now, the state couldn’t issue those permits because of the wild and scenic rivers law.

California Attorney General Xavier Becerra (D) referenced that in recent comments on the plan in October. He called the gambit a "poorly-cloaked move to evade the Clean Water Act."

If Reclamation were to get past that requirement, other hurdles remain.

There is also a state water rights issue. And under a 2016 law, the Water Infrastructure Improvements for the Nation (WIIN) Act, Reclamation needs a local cost-sharing partner; Reclamation cannot pay for the whole project, which would cost at least $1.3 billion.

So far, Reclamation doesn’t have one, and it’s unclear whether any water district can sign on because of the state’s opposition. Westlands stepped away from studying the project last year after Becerra sued it (E&E News PM, Nov. 8, 2019).

Reclamation would have to "just wave their hands about that they don’t have a cost-sharing partner," Stork said. "They need to make some wild-ass, twisted interpretation to get around that."

There is also a timing issue — including the incoming Biden administration.

Under the National Environmental Policy Act, Reclamation must wait 30 days from when it issued the announcement on Nov. 20 until finalizing the record of decision, the next step before any construction could begin.

That would push the effort into late December, with only weeks until President-elect Joe Biden takes office.

Asked about timing for next steps, Reclamation said in an emailed statement that it is "continuing to work on this high priority project and will provide an update in the coming weeks."

Huffman, the chairman of the House Natural Resources Subcommittee on Water, Oceans and Wildlife, said Reclamation seems to be using an "if they build it, they will come" approach to the project.

"Reclamation has been way ahead of its actual legal authorization on this project," he said. "And they seem to be counting on leading Congress by the nose and somehow get permission to preempt California law to build a project that is illegal and has no sponsor."

John McManus of the Golden Gate Salmon Association questioned the timing and the effort behind the release, especially since it didn’t come out until post-Election Day — after it could have given California Republicans a political boost.

"The question might be, why did they even bother with this?" he said.

Stork, of Friends of the River, speculated that perhaps the Trump administration is trying to play a long game, setting the table in case Republicans take back control of the House in 2022 or 2024.

But he also said the effort is indicative of how Reclamation has returned to a mindset in the Trump administration not seen since the middle of the 20th century, when it was building dams across the West.

"The Trump victory and presidency," he said, "let people in Reclamation begin to experience their inner Reclamation — like it’s the ’40s and ’50s."