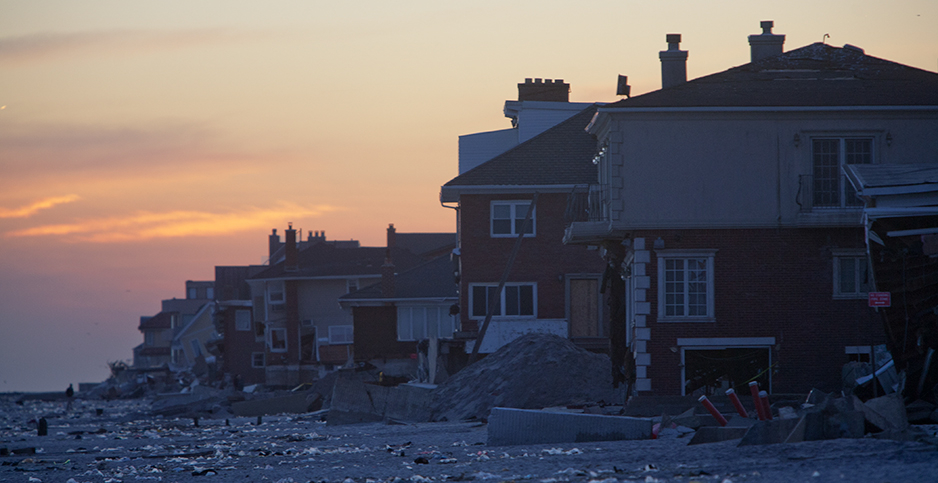 Homes in the Rockaways in Queens, N.Y., that were damaged during Superstorm Sandy in 2012. Allan Tannenbaum/Polaris/Newscom

The federal government has curtailed home buyouts as a way to move flood victims out of harm’s way, even as the risk of catastrophic flooding is rising under a warming climate, a new analysis has found.

Moreover, even when federal buyouts are available to flood victims, bureaucratic delays can hold up property transfers for years, making buyouts unworkable for millions of Americans who are stuck in low-value, sometimes uninhabitable homes.

"The hard truth is that sea-level rise and escalating flood risk will make it increasingly difficult for people to stay in the places where they live today," Anna Weber and Rob Moore of the Natural Resources Defense Council said in the 22-page analysis released this morning.

In many cases, homeowners who would opt for a buyout, if offered, end up repairing flooded properties at their own expense, raising their risk exposure to the next disaster and placing additional strain on financial, emotional and family well-being.

"What’s changing is the overall landscape of flood risk in the U.S.," said Weber, a NRDC policy analyst focused on water and climate change, in a telephone interview. "More attention is being paid to flooding now, and we’re seeing areas of the country with catastrophic floods two and three years in a row."

The analysis draws on Federal Emergency Management Agency buyout data going back 30 years and provides a window on how the agency has deployed flood mitigation strategies since the late 1980s.

Fundamentally, the analysis shows that buyouts have become a second or even third option in the government’s mitigation toolbox — behind flood insurance and reconstruction grants — even though buyouts may be the most cost-effective method to move people out of harm’s way while saving taxpayers billions of dollars.

Voluntary home buyouts are one of several options available to homeowners under FEMA’s Hazard Mitigation Grant Program, although such grants require state and local sponsorship. FEMA covers three-fourths of home buyout costs; state or local governments pick up the rest.

FEMA has purchased 43,000 properties since the late 1980s in 49 states and Guam, Puerto Rico and the U.S. Virgin Islands, according to the analysis. The mean purchase price per home was $54,000 based on pre-flood market value and not accounting for inflation or insurance claims.

The most recent widespread use of home buyouts occurred after Hurricane Harvey catastrophically flooded Houston and surrounding areas in 2017. The agency funded buyouts of 984 properties then. While Harvey netted the largest number of buyouts tied to a single event since Hurricane Katrina, annual flood buyouts have generally declined since 2008.

NRDC maintains that FEMA buyout programs are overly complex and cumbersome for homeowners. In the face of bureaucratic obstacles and delays, "many homeowners and communities simply rebuild after a flood disaster and hope the next flood misses them," the authors said.

The report notes an additional 13 million people will see their homes threatened by coastal flooding alone by 2100.

A FEMA spokesperson said the agency views buyouts as "the most permanent way to mitigate against future flood risk and helps move people out of harm’s way and to break the repeated cycle of disaster — repair, over and over again."

"Through the planning process, potential risks faced by a community are identified and evaluated and strategies to address those risks are developed," the official said.

FEMA-funded home buyouts have occurred in 49 of the 50 states and in more than 1,000 counties, NRDC found. Half of all FEMA-acquired properties were tied to 17 disaster events dating to the early 1990s. In most cases, a home’s purchase price is based on pre-disaster market value.

Disaster buyouts peaked with the Great Mississippi River Flood of 1993, after which FEMA acquired and tore down 8,024 properties in the floodplain and adjacent high-risk areas.

The next largest buyout came with Hurricane Floyd in 1999 (1,880 properties), followed by Tropical Storm Allison in 2001 (1,300 properties), and the Red River flood of 1997 that enveloped parts of North Dakota and Minnesota (1,204 properties). No single flood disaster since has netted more than 1,000 FEMA buyouts, according to the analysis. Hurricane Matthew, which caused extensive flooding in North Carolina in 2016, netted 443 FEMA-backed buyouts, less than half the number associated with Harvey.

The vast majority of buyouts have been for inland homes flooded by overtopped rivers or extreme rain events like Harvey or Hurricane Florence in 2018. Most buyout grants fund the purchase of four or five houses, according to the data.

NRDC maintains that’s a drop in the bucket compared with what is needed to protect American homeowners who are not privately insured for flood or whose homes are repetitive-loss properties that no longer qualify for the National Flood Insurance Program.

"In some cases, owners are leaving out of desperation with no government support," Weber said.

Even under a best-case scenario, where federal funds are readily available and buyouts have local government support, a homeowner can expect to wait a year to close with a purchasing government agency.

"That’s still insufficient to meet the demand that the nation needs [for buyouts] in the coming years," said Moore, an NRDC senior policy analyst based in Chicago.

Among the reforms proposed by NRDC: administering property buyouts directly from the National Flood Insurance Program. Such a change would help disentangle the buyout process and reduce uncertainty for property owners who face high risk of severe flood damage.

A second proposal is to attach "increased cost of compliance" provisions to flood insurance policies to help property owners close the gap between the value of their damaged homes and the cost of relocating to higher ground. FEMA already provides an ICC of up to $30,000 to be used for elevating, demolishing or relocating a home to meet current building codes and floodplain ordinances. Such a program should be extended to buyouts, NRDC said.

"This is an area ripe for innovation," Moore said. "We need to come up with some new ways of making these things happen more equitably, more efficiently and much more rapidly."

Other organizations and stakeholders have embraced such reforms, including the Association of State Floodplain Managers and the SmarterSafer coalition, whose membership includes environmental groups, insurers and taxpayer advocates.

"It just leaves homeowners in such a precarious position," Conrad said.

Ultimately, however, mitigation that includes buyouts "is exactly what it takes to stop the ‘flood-pay, flood-pay’ drain on taxpayer disaster assistance resources," he added.