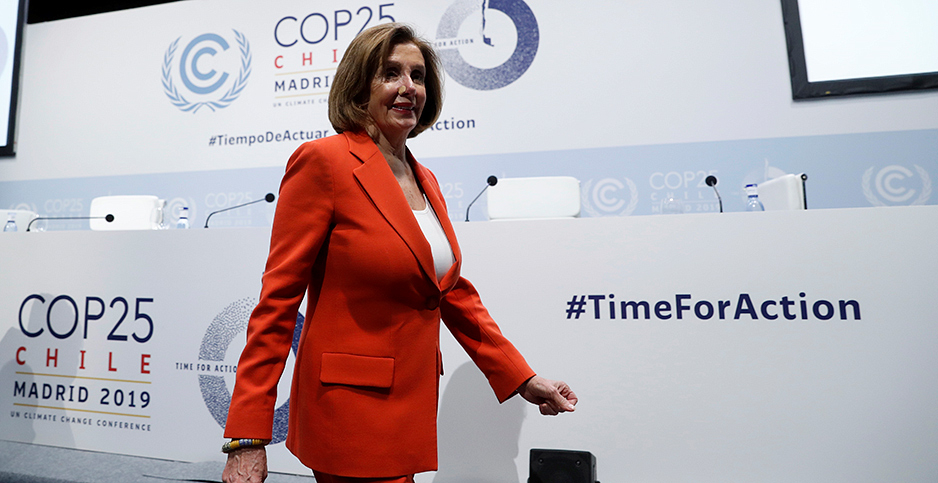 House Speaker Nancy Pelosi’s message to foreign partners who feel jilted by the United States’ impending departure from the Paris Agreement was simple.

That theme was repeated more than a dozen times during the press conference the Californian lawmaker and her all-Democrat delegation gave today at the opening day of a United Nations climate conference in Madrid.

Pelosi, four House committee chairmen, nine other members of Congress and a senator traveled to the Spanish capital — despite a busy December legislative session that includes a presidential impeachment investigation — to blunt the impact of President Trump’s move last month to start the formal process of withdrawing from the climate pact.

The United States will stand alone outside the Paris Agreement next Nov. 4, a day after the presidential election. But Pelosi, Sen. Sheldon Whitehouse (D-R.I.) and others who made the journey reminded their international audience that Congress is a co-equal branch of government. And the House has voted to stay in Paris.

"The United States is still in," Pelosi asserted. "Our delegation is here to send a message that Congress’ commitment to take action on the climate crisis is iron clad."

House Select Committee on the Climate Crisis Chairwoman Kathy Castor (D-Fla.) touted her committee’s work on a road map for congressional climate action planned for release early next year, while House Energy and Commerce Chairman Frank Pallone (D-N.J.) pledged to move legislation to decarbonize the economy by 2050, beginning in 2030 for the electricity sector.

Whitehouse promised the return of "the America that you know" that, under President Obama, helped to broker the 2015 climate deal the U.S. is now poised to leave. He said states, cities and many U.S. corporations remained committed to its principles.

"Unfortunately we are having to fight our way through a kind of a blockade by the fossil fuels industry," said Whitehouse, an ardent advocate for climate action who visited the Paris climate summit four years ago.

Oil and gas companies and electric utilities are taking a proactive stance at this year’s conference, but Whitehouse expressed skepticism about their commitments.

"My firsthand experience is that the statements of their lips do not match the expenditure of their funds," said Whitehouse.

Pelosi and her colleagues declined to directly answer questions on the impeachment investigation or Trump policies while on foreign soil.

But they had a harder time avoiding queries about divisions within their own caucus over climate policy. Asked about Democratic presidential contenders who have backed the Green New Deal proposal that she hasn’t embraced, Pelosi praised their "enthusiasm."

She and Pallone worked to associate themselves with the proposal’s broad goals — including full decarbonization of the U.S. economy by midcentury — while painting their Climate Action Plan proposal as the more realistic way to attain them.

"We’re not about incrementalism, this is about being transformative," Pelosi promised.

Pelosi has attended U.N. environmental conferences before, including the Earth Summit in Rio de Janeiro in 1992 and climate talks in Copenhagen, Denmark, in 2009.

The latter was intended to produce a global deal on climate change but collapsed without achieving its aim. Paris finally delivered on that promise six years later.

The Trump administration isn’t expected to send political appointees to Madrid for talks that will end next Friday. The U.S. is represented by a team of diplomats and experts led by the State Department.