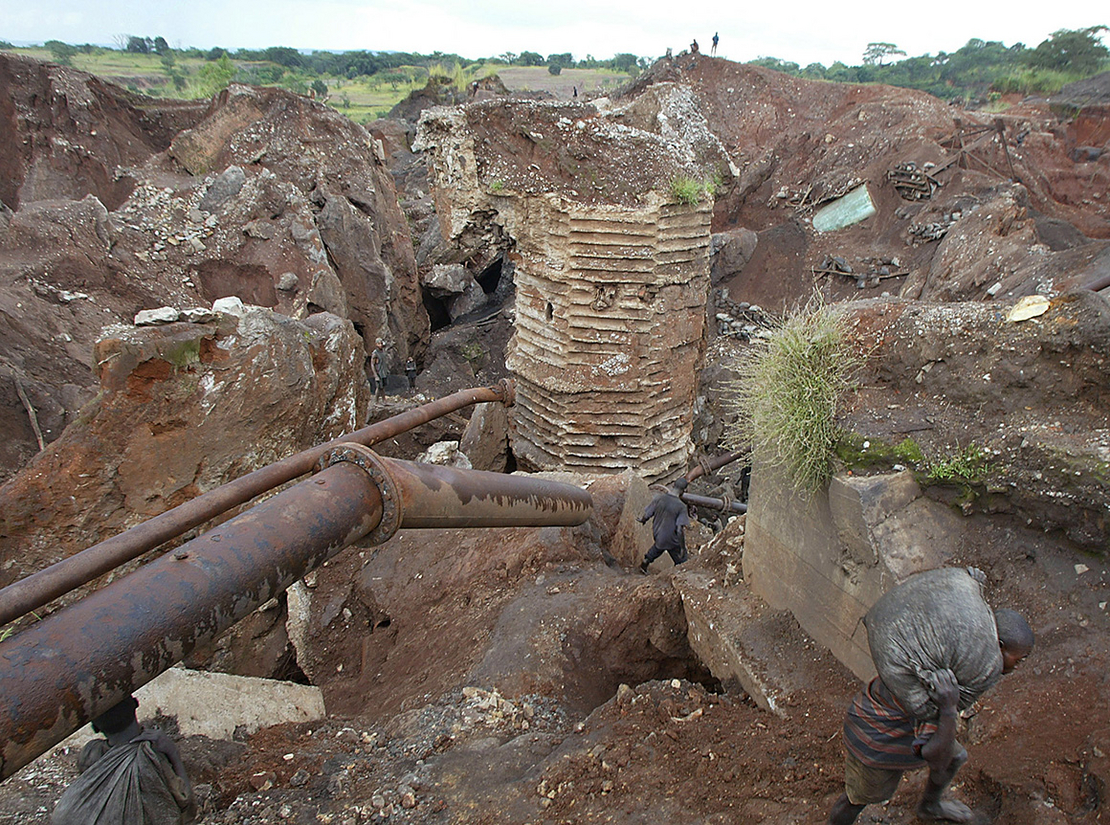 A person carries wet cobalt on his back at the Shinkolobwe cobalt mine in Congo in 2004. Schalk van Zuydam/AP Photo

The U.S. moved this week to counter China’s control over production of electric vehicle batteries at a time of widespread concerns over global shortages of key minerals and labor abuses in African mines.

In a memorandum of understanding Wednesday, the State Department pledged to help build an EV battery supply chain in Congo and Zambia. The department and other U.S. agencies will offer technical assistance to the two countries, cooperate on feasibility studies and explore opportunities in the sector for U.S. companies, according to the MOU.

The goal is to shift Congo and Zambia from being only sites of extraction for minerals to processing, manufacturing and assembling batteries, according to the text (Energywire, Nov. 4, 2022).

“This is the future, and it is happening in [Congo] and in Zambia,” said Secretary of State Antony Blinken at the MOU’s signing on Dec. 13. The full text was not made public by the State Department until Wednesday.

The deal takes place in a region where the mining sector is of unrivaled importance for electric vehicles.

Congo and Zambia are major global sources of cobalt and copper, key ingredients in lithium-ion batteries. Once extracted, those minerals are often exported to China, where they are subsequently processed and incorporated into batteries.

China made about 75 percent of the world’s lithium-ion batteries in 2021, compared with 7 percent for the U.S., according to the International Energy Agency.

That has gained the attention of Congress, considering the Biden administration’s aim of ramping up electric car sales. By 2030, the administration wants as much as half of new car sales in the U.S. to be electric. Republicans have criticized that goal in part on the grounds that it would play into the hands of China and other geopolitical foes.

While the MOU did not mention China, helping Congo and Zambia scale up their own battery industries would create a new source of competition for the Asian country.

Kwasi Ampofo, head of metals and mining at BloombergNEF, noted that China controls about 80 percent of the battery “midstream,” referring to the conversion of minerals into usable battery parts.

“This MOU if implemented successfully will help move the needle for the U.S.,” he wrote in an email.

The moves come as analysts predict a looming supply shortage of minerals that could slow the U.S. transition to electric cars and other low-carbon technologies. Last year, for instance, Wood Mackenzie released a report citing likely copper shortages for electric carmakers.

The deal also raises questions about how new U.S. influence in the region might affect alleged labor abuses in the Congolese cobalt sector, which provides 70 percent of the world’s supply. Last year, the Labor Department added lithium-ion batteries to its list of goods made with child labor or forced labor due to reports of abuses in the country’s cobalt mines (Energywire, Oct. 5, 2022).

The Labor Department drew particular attention to child labor in Chinese-owned cobalt mines, which include some of the largest in Congo, and noted reports of adults being trafficked to work in small-scale mines in one part of the country.

Zambia also appeared on the Labor Department list for the presence of child labor in several non-energy-related industries. Human rights researchers have in past years denounced abusive conditions in Chinese-run copper mines.

“It’s unconscionable that Joe Biden and this activist administration chooses child slave labor over the American miner and the American worker,” Rep. Pete Stauber of Minnesota said in a Dec. 16 appearance on Fox News. Stauber, who is incoming chair of the House Energy and Commerce Subcommittee on Energy and Mineral Resources, has introduced bills that would shorten environmental reviews for critical mineral production within the U.S. (E&E Daily, Jan. 10).

By contrast, Ampofo said he thought the U.S.’s battery collaboration with Congo and Zambia could help combat labor abuses.

“The advantage of such partnerships is that it enforces global standard in regions where local standards are weak. An example is the Dodd-Frank Act which helped shine a spotlight on conflict minerals. This partnership could also help to strengthen and enforce standards and regulations that will address child labor,” he wrote in an email.

One type of project mentioned in the agreement concerns plants that refine minerals into precursor materials for batteries. Those plants are an example of the type of “industrialized economic growth” that the three countries want to support in Congo and Zambia, it said.

Two years ago, Ampofo led an analysis of that idea at the behest of the United Nations and several international financial institutions.

Building plants that produce battery cathode materials in Congo would cost one-third of what it would in China, he and his co-authors at BNEF concluded.

The plants could sell at competitive prices and leave a smaller emissions footprint than Chinese cathode material plants by drawing their power from low-carbon hydroelectric generators, the research said.

The State Department did not respond to a request for comment in time for publication.