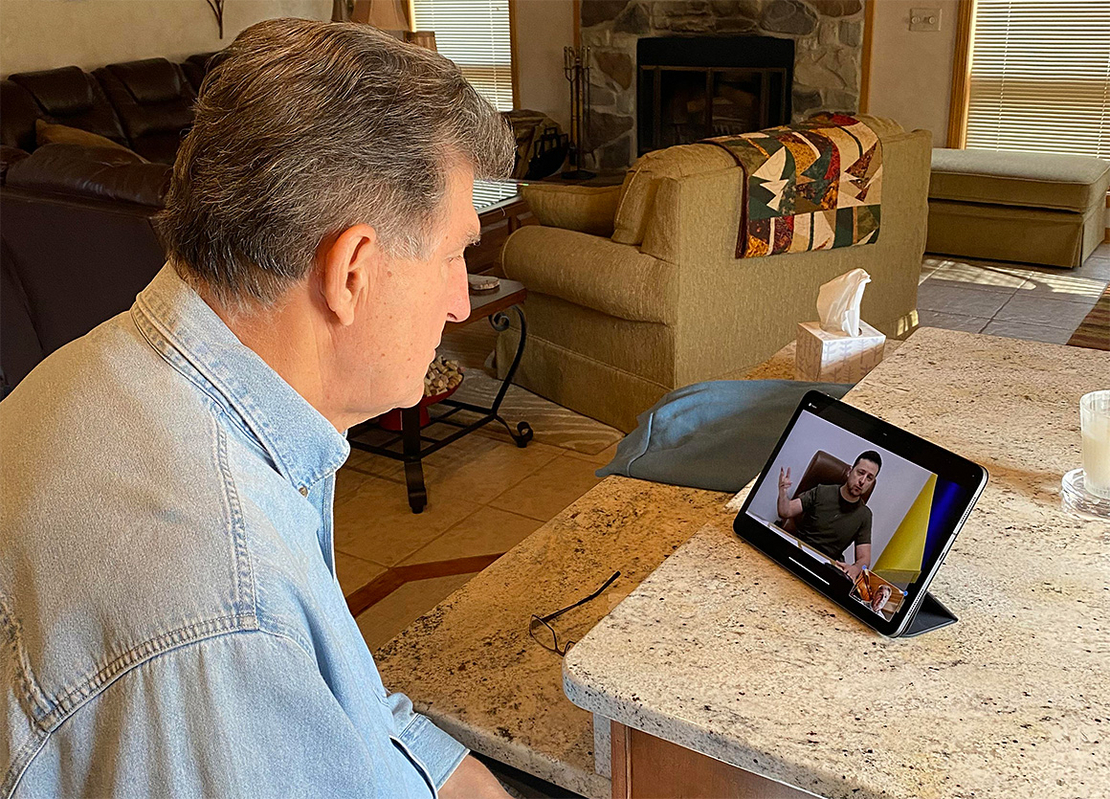 Members of Congress are coalescing around a ban on Russian oil imports to the United States.

The growing sentiment comes amid bipartisan horror at Russia’s invasion of Ukraine and on the heels of a virtual meeting over the weekend with nearly 300 lawmakers and Ukrainian President Volodymyr Zelenskyy.

Rep. Jim Himes (D-Conn.), in an interview on NPR yesterday, said discussion of the ban “was probably the turning point on the call.” He added, “I suspect when Congress reconvenes on Monday, there is going to be, if not unanimity, then at least a very, very strong push to stop the importation by the United States of Russian oil.”

Lawmakers are eyeing the fiscal 2022 omnibus spending bill as a likely landing spot for the roughly $10 billion Ukrainian aid package. Congress has until Friday to avoid a government shutdown when stopgap funding expires.

While the parties are coming together on an import ban, their solutions to foreign energy dependence remain very different. Democrats, for instance, have long fought against actions that could incentivize domestic production of “traditional” energy sources like oil, gas and coal.

“If we ever want to be truly free of the ability of dictators to blackmail us over oil and gas, we should be investing right here at home in renewable energy technologies; we should be weaning ourselves off fossil fuels so that this situation that we’re in does not happen again,” Rep. Pramila Jayapal (D-Wash.), the chair of the Congressional Progressive Caucus, said in an interview on MSNBC on Saturday.

Jayapal suggested she was prepared to go along with the plan to ban imports. “We are going to see gas prices rise, but it is in the service of trying to quell a dictator,” she said, referring to Russian President Vladimir Putin.

In the past few weeks, Republicans and some Democrats have repeatedly called for increased fossil fuel production to soften the blow from energy price spikes. Among the asks from the GOP: Restarting the Keystone XL pipeline, increasing liquefied natural gas exports and ramping up energy production on federal lands (E&E Daily, March 1).

Despite such calls, it’s not expected that any of those ideas would make it into the Ukraine aid supplemental, as Democratic leaders have said they reject Republican attempts to push these policy riders through (E&E Daily, March 4).

But senior Democrats have not expressed an interest in putting specific restrictions on U.S. energy extraction activities into the supplemental as a safeguard, something House Natural Resources Chair Raúl Grijalva (D-Ariz.) would like to see as a condition of banning Russian oil imports.

“If they’re serious, and we’re going to do an import ban on Russian oil … let’s ban any company doing any business on federal lands and waters that’s doing business with Russia,” he told E&E News late last week. “Let’s ‘use it or lose it.’ There are 9,000 permits that are not being used right now. And the speculative oil companies are hanging onto them so nobody else will be able to do anything on those leases that we have as a way to corner the market and continue to control the prices on gasoline and energy for the American people.”

‘This is the real world’

On Fox News Sunday yesterday, Sen. Chris Murphy (D-Conn.), who pushed last year for maintaining a fee on methane in the now-stalled, $1.7 trillion climate and social spending bill, was leaving the door open for changes to U.S. energy production policies.

“I think the reality is, if Europe decides to take a tough stand against Russian oil and gas, there’s no way to not have some of that filled in with U.S. natural resource production,” said Murphy.

He was alluding to comments made elsewhere yesterday by Secretary of State Antony Blinken that the White House was in “active conversations” about supporting a Russian oil import ban but was holding out hope it could be done in coordination with other European allies.

“LNG in particular, natural gas that we produce here in the United States and shipped to Europe, is likely going to have to be part of the solution,” Murphy continued.

But, he added, “I would just want to make sure that in the United States, if we’re going to have to fill in what we lose in Russian gas, that’s not just from West Virginia coal, that’s also from Long Island Sound wind power.”

That was seemingly a nod to Sen. Joe Manchin (D-W.Va.), the chair of the Senate Energy and Natural Resources Committee and the lead sponsor of legislation to ban Russian oil imports.

Manchin, on NBC’s “Meet the Press,” was asked whether he thought his ability to negotiate with the president on climate issues and other matters had changed since the onset of the crisis in Ukraine — the senator was, after all, the individual who put the brakes on the “Build Back Better Act,” citing inflation as the primary concern.

“It makes it more realistic,” Manchin replied. “This is the real world. … There’s aspirational things we want to do, whether it’s the far left, far right, whatever it may be. Forget about the aspirational. We’re living in the real world.”

He went on, “Our energy that we produce in America is better and cleaner than any place else in the world. So anything we backfill is going to be better than what [Russia] produc[es]. The gas from LNG that we can send over, expanding the ports. We’ve basically got requests for permits that are still standing and we haven’t given. We need to do that.”

Manchin intends to hold a hearing later this week “to examine the use of energy as a tool and a weapon, and ensuring energy security for the United States and its allies,” according to a committee description.

No witnesses have yet to be scheduled, but the description likely alludes to Manchin’s desire to unleash “an ocean of energy” to provide for both domestic and global energy needs.

Last week, Manchin was briefed by House Republicans on a bill, H.R. 6858, that brings together longstanding GOP energy ambitions they want to see included in the Ukraine supplemental: LNG, Keystone XL and domestic drilling.

Grijalva, whose committee staff attended the presentation, said his understanding was “it’s not something Manchin wants to jump on right now.”

But Manchin’s comments yesterday could embolden Republicans who want to see Democrats concede mistakes on limiting domestic energy production in the pursuit of limiting emissions, particularly as a Russian oil ban could further drive up U.S. gas prices.

“Remember this as you’re filling up your car with $4 gas this weekend. President Biden … Banned new drilling on federal land … Closed the Keystone Pipeline … Gave Putin a pipeline,” tweeted House Minority Leader Kevin McCarthy (R-Calif.), whose staff was among the congressional aides present during the pitch to Manchin last week.

Congress will be racing against the clock to impose an import ban as lawmakers contend with the spending deadline this week. Further complicating matters, the House is scheduled to leave Wednesday afternoon ahead of a Democratic Party retreat.

“The House is currently exploring strong legislation that will further isolate Russia from the global economy,” including a “ban [on] the import of Russian oil and energy products into the United States,” said House Speaker Nancy Pelosi (D-Calif.) in a letter to colleagues last night.

“Let me be clear: the United States need not choose between our democratic values and our economic interests,” Pelosi continued. “The Administration and the Congress remain laser-focused on bringing down the higher energy costs for American families and our partners stemming from Putin’s invasion. We salute President Biden for leading our allies in releasing 60 million barrels of oil from strategic reserves — including 30 million from American reserves in the SPR — to stabilize global markets.”

While the Senate’s No. 2 Democrat, Majority Whip Dick Durbin of Illinois, has also signed on in support of an oil import ban, the White House continues to mull its options, and Senate Majority Leader Chuck Schumer (D-N.Y.) has not yet weighed in.

It’s not clear whether Schumer addressed the matter on Saturday’s Zoom session with Zelenskyy.

“[Senate Minority Leader Mitch] McConnell and I, along with the other members on this Zoom, are working very hard in a bipartisan fashion to get all the assistance the administration has requested for the Ukrainian people,” Schumer said, according to a source on the call. “Together, we will get that assistance of over $10 billion in economic, humanitarian and security assistance to the Ukrainian people quickly.”

Schedule: The Senate Energy and Natural Resources hearing is Tuesday, March 10, at 10 a.m. and via webcast.