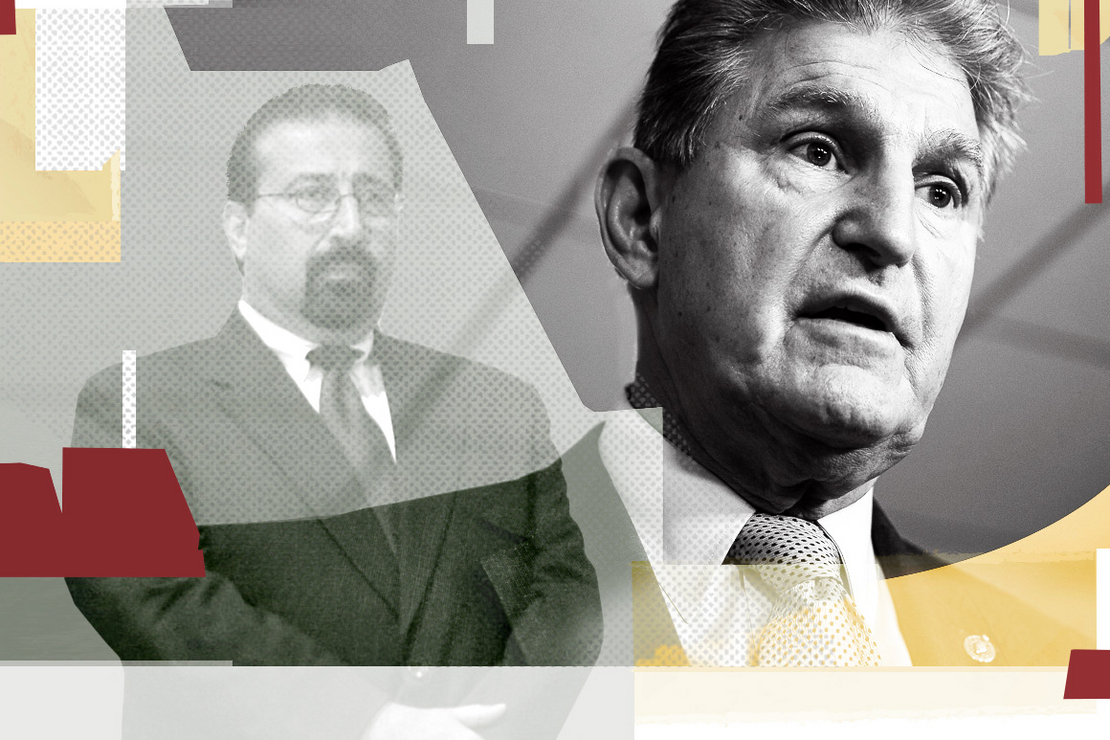 When Larry Puccio quit as chief of staff for his longtime friend, Democratic Sen. Joe Manchin, it took him one week to become a lobbyist.

The move was so abrupt in 2010, when Manchin was governor of West Virginia, that state legislators passed a law to prevent it from happening again. It’s known as the Puccio rule.

Now Puccio has followed his old friend to Washington.

He leveraged his connections with Manchin to enter the federal lobbying scene for the first time last year, a move that put large energy companies within earshot of Manchin as he was molding historic climate and energy legislation to include remarkable prizes for the fossil fuel industry.

The kinship reveals Manchin’s closeness to an industry at the center of congressional and scientific scrutiny for contributing to rising temperatures. Puccio’s ascent into federal lobbying came just before Manchin had diluted, or jettisoned, some of the strongest provisions proposed to reduce emissions within the power sector.

It’s been that way for a half-century.

In the beginning, Manchin, then in his 20s, was a former high school football star and heir to a Marion County political dynasty. Puccio was a wavy-haired teenager who came up to Manchin’s shoulder.

They grew close in the 1980s, when Manchin had a carpet business in a Fairmont strip mall, where Puccio sold organs. Both of their businesses eventually failed.

But Manchin would soon ascend in state politics — and in the private sector, as an owner of a coal transport company.

Puccio was at his side as a friend, an adviser and then a lobbyist.

Some call him a “Manchin whisperer.”

“There’s a lot of people who need Larry to obviously have an in with Joe,” said Roman Prezioso, a former Democratic state senator and lifelong friend of Manchin who grew up down the road from him in Marion County. “If you got an ace, you got to play it, and it’s made him very, very rich, and he’s been able to pick up a lot of clients.”

Puccio’s success accelerated in 2021, when Manchin was sworn in as chair of the Energy and Natural Resources Committee. Puccio began rostering federal energy clients within weeks of Manchin taking the gavel.

Since then, Manchin’s legislative work stands to benefit Puccio’s clients. That includes provisions in the Inflation Reduction Act as well as the bipartisan infrastructure law. Manchin was a key architect of both measures.

Beyond that was Manchin’s explicit condition that the Mountain Valley pipeline, a contentious natural gas project, must be completed in exchange for his vote on major climate legislation.

Puccio’s biggest client is a key beneficiary of the potential pipeline — a group of energy companies called the Appalachian Natural Gas Operators Coalition. The group has paid Puccio’s firm at least $405,000 since July 2021, according to federal lobbying records.

Last month, Manchin withdrew the bill that would have forced federal agencies to permit the pipeline amid sharp opposition from both Democratic and Republican senators. But he vowed to revive the issue.

Before all of that, in the months prior to the flurry of legislative action that began in 2021, Puccio had positioned himself as a bridge between the energy world and Manchin.

“He said he had energy companies begging him to open an office in D.C. because he had access to Joe, and that made it easier for him to do business there than in West Virginia,” said Scott Sears, a former Manchin adviser and a past executive director of the West Virginia Democratic Party who has been friends with Puccio for decades. “He said it was because of everything Joe was doing as chair of the energy committee.”

The money has poured in, earning Puccio at least $766,000 since January 2021, federal lobbying records show.

At the same time, Manchin was taking remarkable steps to advance the Mountain Valley pipeline. A memo he drafted for Senate Majority Leader Charles Schumer of New York spelled out Manchin’s conditions for supporting the climate bill, which was passed in August. The list of demands includes this requirement at the end: “Complete the Mountain Valley Pipeline.”

Manchin has supported the project for years, but the memo — and the pipeline’s later inclusion in his failed energy permitting bill — coincided with Puccio’s expansion into federal lobbying.

Puccio said in a brief interview that he has not personally lobbied on the pipeline.

“I have not worked on that issue of the pipeline at all,” he said.

However, companies that make up his biggest client — the Appalachian Natural Gas Operators Coalition — would either build the pipeline, transport gas through it or use the pipeline to justify drilling additional gas wells. Puccio is listed as a lobbyist for the coalition, federal records show.

The coalition includes Equitrans Midstream Corp., which is playing a leading role in the pipeline’s construction. It also includes NextEra Energy Inc., a utility giant and a partner on the pipeline, and Pittsburgh-based EQT Corp., which would use the pipe to ship natural gas.

Other companies belonging to the coalition — Cabot Oil and Gas and Diversified Energy Co. — could benefit from increased gas production in the region.

None of the companies involved in the Appalachian Natural Gas Operators Coalition responded to requests for comment.

Puccio has been at Manchin’s side during each step of his rise through West Virginia politics, from the state legislature to secretary of state to governor and then the U.S. Senate.

He has served as Manchin’s campaign manager, the head of his political action committee and leader of the state Democratic Party.

Neither man wanted to speak about their relationship or whether it was helping Puccio influence federal policy on behalf of his clients.

“I don’t think I need to be explaining to you what I do with my clients. You’ve asked me a question and I’ve answered, and that’s as much as I have to say,” Puccio said in a brief telephone interview recently. “You’re asking me about my private business and what I do, and I don’t think that’s appropriate.”

Manchin also declined to answer questions about whether his friendship with Puccio has influenced his actions. But Manchin did not deny he had talked to Puccio about the pipeline.

“I’ve known him since he was a child,” Manchin said in the Capitol last month. “We have a great relationship.”

Puccio’s last official role with Manchin was as his chief of staff, the top job in the governor’s office. He quit in 2010. Days later, he became a lobbyist for hotels and energy companies that wanted access to the most powerful politician in Charleston.

His rapid shift from senior government adviser to lobbyist alarmed state lawmakers, who passed a law requiring a one-year “cooling off” period for officials who wanted to become lobbyists.

One of Puccio’s first clients in 2010 was Allegheny Energy, which merged with FirstEnergy Corp. the following year. FirstEnergy, one of the nation’s largest electric utilities, has been a Puccio client ever since.

The utility has another connection to Manchin: Its subsidiary Mon Power buys electricity from a West Virginia power plant that is the largest customer of Manchin’s family coal business, Enersystems Inc.

That has created a triangle of connections that blur Manchin’s political and business interests: The Manchin family company delivers coal to the plant, which sells power to FirstEnergy, which employs Puccio to lobby lawmakers.

Since 2010, Manchin has earned more than $5 million from Enersystems, his family’s business. The company transports waste coal to Grant Town, the only plant in West Virginia that still burns the slurry of cast-off coal and rock trucked by Enersystems from a closed mine nearby. Enersystems is run by Manchin’s son, Joe Manchin IV.

E&E News has previously reported that Puccio helped negotiate a deal between Mon Power and the owners of the Grant Town power plant in 2006 (Climatewire, Feb. 2). The agreement hiked the plant’s power rates on customers and extended Mon Power’s commitment to sell the plant’s electricity by six years, offering a lifeline to the financially distressed coal plant.

The deal was approved by the state’s public service commission, which was led at the time by a Manchin appointee.

Puccio’s recent expansion into federal lobbying comes years after he built one of West Virginia’s most successful lobbying firms. He continues to represent 27 clients in West Virginia, state lobbying disclosures show. That includes the family businesses of Gov. Jim Justice (R), such as the Greenbrier resort and the coal company Bluestone Resources.

As he did with Manchin, Puccio has worked as a senior campaign adviser for Justice, even though it meant turning his back on his longtime Democratic roots.

It’s unclear how much money Puccio has been paid by his West Virginia clients, because state law doesn’t require companies to disclose their lobbying payments.

In Washington, Puccio’s value as a lobbyist is largely reliant on his relationship with Manchin, said Mike McKenna, a longtime energy lobbyist who advised the Trump White House.

Because of that friendship, he has some weight in the insular circle of Washington lobbyists.

“But probably not as much as he thinks he does,” McKenna said.

Still, many of Puccio’s clients have seen potential windfalls of federal money as a result of legislation that Manchin helped write, such as the $1 trillion bipartisan infrastructure law of last year and the Inflation Reduction Act’s inclusion of $369 billion in clean energy spending.

One of his largest clients is Diversified Energy, which holds about 70,000 oil and gas wells across the United States, a number that exceeds Exxon Mobil Corp.’s wells. The company is part of the Appalachian Natural Gas Operators Coalition.

Diversified specializes in acquiring dying wells, a strategy that can prolong the life of oil and gas extraction sites where high levels of methane often escape from industry equipment. The company has recently turned to another type of business: plugging methane leaks using taxpayer money.

Diversified stands to reap the benefits of $1.5 billion that was tucked into the Inflation Reduction Act to address leaking methane, a potent greenhouse gas (Climatewire, Aug. 19). Additionally, the bipartisan infrastructure law included $4.7 billion to permanently cap the boreholes of aging oil and gas wells.

Diversified also pays Puccio to lobby at the state level, according to West Virginia ethics filings.

The company’s chief executive, Rusty Hutson Jr., was named vice chair of the board of governors for Fairmont State University in 2020. The college is also a Puccio client, public records show. Puccio’s son Jay Puccio, an insurance salesman, also sits on the board. Another son, Larry Puccio II, was hired by FirstEnergy, a longtime client of Puccio.

The ability to shape the energy landscape of West Virginia comes from Puccio’s status as “royalty” in the state’s northern region, thanks in large part to his association with Manchin, said John Kilwein, a political science professor at West Virginia University.

He described West Virginia as a “classic banana republic” because of its dependence on coal and natural gas. That gives the energy industry a hold on political power that is seen in few other states, he added.

“At the end of the day, Manchin is most concerned about the energy sector and the people that support it. And also, that directly benefits his own bank account,” Kilwein said.