Under fire for solar probe, Biden turns to wartime powers 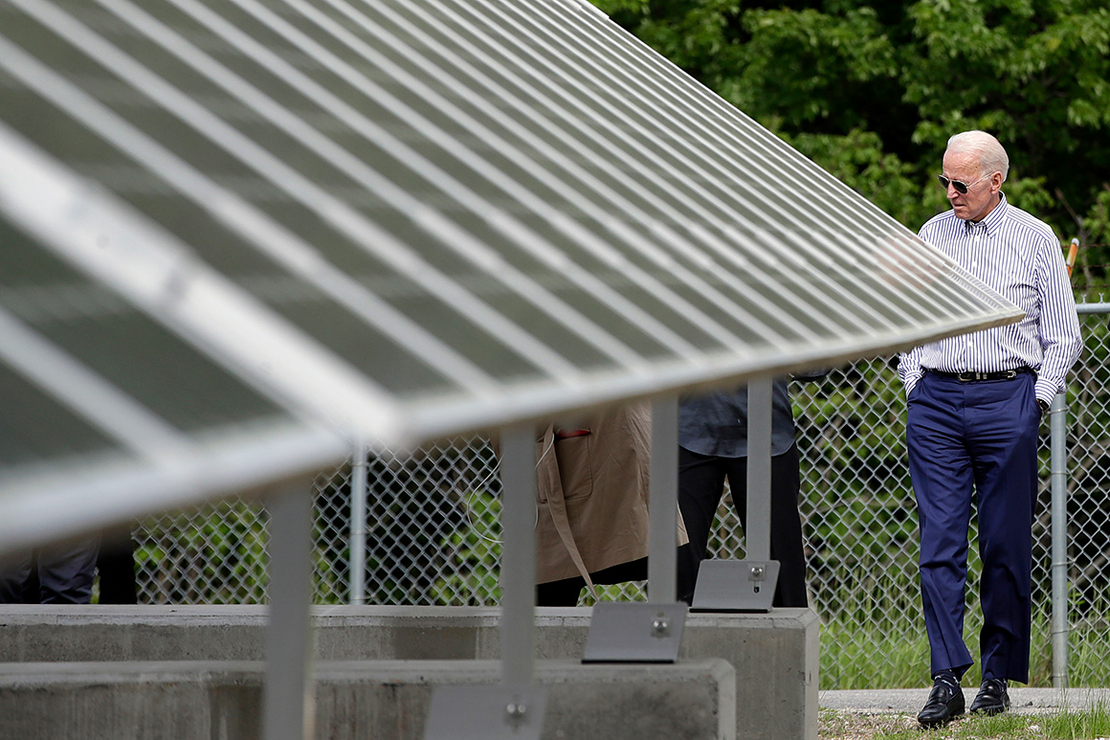 President Joe Biden will move to pause tariffs and spur domestic production of solar panels in his latest attempt to use executive authority to advance renewable energy production.

The administration announced what it called a “24-month bridge” to waive tariffs on solar products from four Southeast Asian countries “to ensure the U.S. has access to a sufficient supply” to meet generation needs “while domestic manufacturing scales up,” the White House said.

“Together, these actions will spur domestic manufacturing, construction projects, and good-paying jobs — all while cutting energy costs for families, strengthening our grid, and tackling climate change and environmental injustice,” the White House said.

Solar trade groups, environmentalists and some congressional Democrats have warned that an ongoing Commerce Department probe has hurt solar deployment. That investigation, which was requested by California panel manufacturer Auxin Solar, is looking into whether China is avoiding tariffs by sending solar components through other countries (Energywire, May 16).

“While the Department of Commerce investigation will continue as required by statute, and we remain confident that a review of the facts will result in a negative determination, the president’s action is a much-needed reprieve from this industry-crushing probe,” Abigail Ross Hopper, president and CEO of the Solar Energy Industries Association, said today in a statement.

The announcement marks the second time in recent months that Biden has announced the use of the Defense Production Act to spur production of materials needed for renewable energy production.

Biden announced in March that he was using his wartime powers under the act to boost U.S. mining of critical minerals used in electric vehicles (Greenwire, March 31).

The act, which has often been invoked by presidents to produce needed supplies for the military and to respond to national disasters, gained increased national attention when former President Donald Trump and Biden used it to ramp up production of supplies needed to combat the Covid-19 pandemic.

It’s unusual for a president to use the law to advance a domestic energy agenda, said Erik Gordon, a business professor at the University of Michigan who has studied the law.

The act is often invoked when there’s a sense of a national emergency, Gordon said, like getting emergency supplies after a hurricane or disbursing infant formula during the recent shortage.

But spurring solar cell production represents a “stretch” from how the act has been used in the past, Gordon said. “That’s not an immediate emergency. We don’t have parts of the country whose solar cells have been destroyed by a hurricane and have to be replaced or the people will freeze to death.”

But presidents have pushed the limits of their executive powers in the past, Gordon said. And Biden, facing congressional opposition to major energy legislation, “is in that long tradition of frustrated presidents trying to expand their personal powers.”

Jim Manley, a Democratic strategist and former staffer to Senate Majority Leader Harry Reid (D-Nev.), said the use of the Defense Production Act to advance energy policy “indicates that they’re aggressively looking for options other than moving legislation.”

Some environmentalists are all for it.

“We hope this use of the Defense Production Act is a turning point for the president, who must use all his executive powers to confront the climate emergency head on,” Jean Su, director of the Center for Biological Diversity’s Energy Justice program, said in a statement. That organization has urged Biden to use the Defense Production Act broadly to expand domestic renewable energy manufacturing.