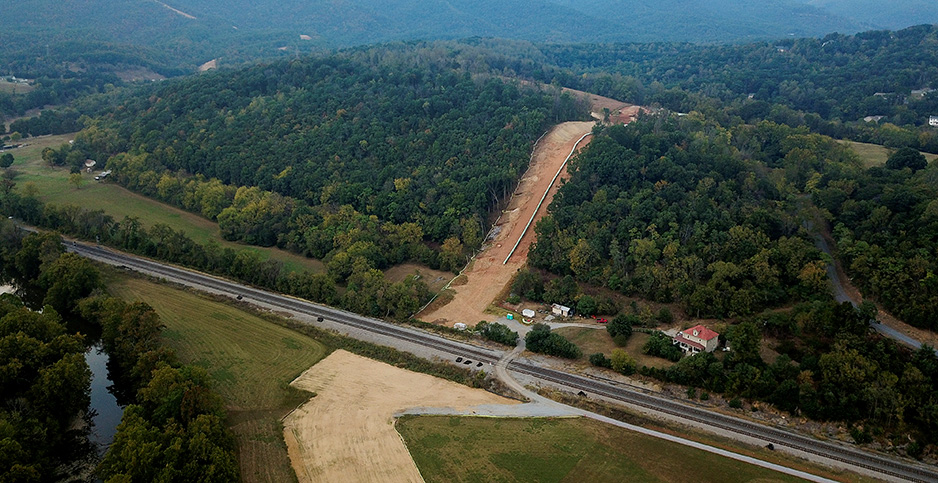 An aerial view of the under-construction Mountain Valley pipeline near Elliston, Va., in September 2019. North Carolina regulators yesterday denied a key permit for the MVP Southgate natural gas pipeline, which would connect to the main MVP system. Charles Mostoller/Reuters/Newscom

A $468 million extension of the Mountain Valley pipeline was dealt a major defeat yesterday as the North Carolina Department of Environmental Quality rejected a key water permit, raising questions about the future of a natural gas project the industry considers critical for the Southeast.

The decision marks the latest blow to pipeline development nationally, following the death of the long-embattled Atlantic Coast natural gas project last month and a temporary shutdown order for the Dakota Access oil pipeline (Energywire, July 14). Environmentalists said they hope North Carolina’s move to block a significant branch of the Mountain Valley pipeline system would spell the end of the wider $5.4 billion proposal.

"It’s long past time for MVP to see the writing on the wall and walk away from this project once and for all," said Joan Walker, a Sierra Club representative for the Beyond Dirty Fuels campaign.

The North Carolina agency cited concerns about climate change and water quality in rejecting the 75-mile Mountain Valley extension, or MVP Southgate. DEQ Secretary Michael Regan also pointed to uncertainties regarding the fate of the 300-mile mainline project, which is being built to move natural gas from northwestern West Virginia to southern Virginia.

"This has always been an unnecessary project that poses unnecessary risks to our environment and given the uncertain future of the MVP Mainline, North Carolinians should not be exposed to the risk of another incomplete pipeline project," Regan said in a statement.

Regan said projects like MVP Southgate will slow the state’s goal to zero out greenhouse gas emissions by 2050.

"North Carolina’s clean energy future is not dependent on adding more natural gas infrastructure," he said. "We should invest in clean, renewable energy sources and the economic benefits of energy innovation."

Regan called climate change the "biggest challenge of our generation" during a presentation of a draft clean energy plan last year (Energywire, Sept. 30, 2019).

Shawn Day, a spokesperson from the Southgate project, said that although the decision to reject the water permit is disappointing, his team is "evaluating its options" and intends to find a way forward.

Sreedhar Kona, a senior oil and gas analyst with Moody’s Investors Service, said there are key differences that set Mountain Valley apart from Atlantic Coast — namely, how much pipe is already underground.

Mountain Valley is estimated to be 92% complete, whereas the Atlantic Coast project was less than 10% built when developers axed it.

"That said, the permits [Mountain Valley] is waiting for are not trivial," Kona said.

Construction is currently on hold while the developer awaits a biological opinion from the Fish and Wildlife Service. The project also needs a right-of-way permit from the Forest Service (Energywire, July 8).

While the water permit rejection "should not technically impact the rest of the mainline," Kona said, it could be a harbinger of future trouble for Mountain Valley Pipeline LLC, which is owned by several companies including Equitrans Midstream Corp. and a subsidiary of utility giant NextEra Energy Inc.

"There’s no direct impact to the mainline itself," Kona said. "But we have to assess the financial impact [on the company] of not having the Southgate portion completed. There could be an impact to cash flow."

Environmental activists can pose "enormous amounts of hurdles" to pipeline construction through regulatory and legal tools, he said, noting that a few more setbacks in aggregate could harm the company’s financial rating.

"This pipeline has grown in budget more than 100%, and the timeline has moved multiple times. Any further delay is something we have indicated could stress the credit ratings," Kona said.

North Carolina has a goal to be carbon neutral by 2050. The target — the first in the Southeast — stemmed from an executive order from Gov. Roy Cooper (D), who called for a road map to make the state more resilient against the effects of climate change, including hurricanes and sea-level rise.

Yesterday’s decision comes as a wide variety of groups and organizations are working on the final version of North Carolina’s clean energy plan.

"The state has made clear that dangerous gas pipelines that threaten rivers, streams, wetlands and other priceless water resources have no place in North Carolina," said Luis Martinez, Southeast energy director at the Natural Resources Defense Council.

In a statement announcing its decision, the DEQ said the "sole utility and purpose" of the Southgate project is based on the completion of the mainline Mountain Valley project, whose future the department views as shaky.

"The uncertainty of the MVP Mainline project’s completion presents a critical risk to the achievability of the fundamental purpose of MVP Southgate," the statement reads. "[M]ost of the adverse environmental impacts would occur during construction. Thus, the Division finds it is inappropriate to unnecessarily risk impacting high-quality waters and critical drinking water supplies of North Carolinians."

Day of MVP Southgate, however, said the project would not bring long-term damage to streams nor lead to the permanent loss of wetlands in the area.

He cited two approvals for the extension from the Federal Energy Regulatory Commission, which he said "concluded the MVP Southgate project could be built and operated safely and responsibly, and with limited adverse impacts."

Day said the project team has made more than 1,200 adjustments based on feedback from landowners as well as engineering and natural resource considerations. He also pointed out that about half of the route would be built along existing utility corridors.

"For more than two years, the MVP Southgate team has worked diligently with stakeholders, including local, state and federal officials, to develop the most efficient, least impactful route for a project that the North Carolina Utilities Commission and Federal Energy Regulatory Commission have recognized is needed," he said.

Mark Ryan, a former Clean Water Act attorney for EPA’s Region 10 office in Seattle, said the fact that North Carolina based its denial on the notion that the connecting pipeline might not get built puts the entire Mountain Valley system’s existence into question.

The state didn’t want to certify the permits and have damages to aquatic ecosystems occur, only for the pipeline extension to never be used, he said.

"It’s not an unreasonable position. But they have a Democratic governor," said Ryan. "I suspect a Republican governor would have come to the opposite conclusion. We’re seeing certificate denials in blue states but not in red states."